Growing Thallium Dendrites in 1879 - a beautiful forest of thorny crystals

By THOMAS J. GREGAN.
THERE are few chemical experiments so well known as the growth of the "lead-tree" and "silver-tree." These carry our minds back to the times of the alchemists, who called the first "Arbor Saturni," and the second "Arbor Dianæ," and they may be looked upon as the type of a large number of phenomena in which the salt of one metal in solution is decomposed by some other metal.
My assistant, Dr. Hand, and myself have lately been experimenting on these replacements, the metallic crystals which are thus produced, and the forces that act through the liquid. Our more special attention has been given to the mutual action of copper and nitrate of silver. If these two substances be brought into contact by the intervention of water, there grows on the red metal what may be called "trees," and, though the analogy between the crystals and the plants is a very superficial one, still the resemblances of external form are sufficiently striking, and a nomenclature drawn from the garden seems the most expressive.
A microscopic view of the growth of these silver crystals round a piece of copper is a truly beautiful sight; a blue glass underneath increases the effect, but they are best seen when they reflect a strong light thrown upon them. They may also be thrown upon a screen as opaque objects, but the beauty and luster of their surfaces are in this way lost. The crystals of silver thus produced differ both in color and form according to the strength of the solution. If it be very weak—say one per cent.—the copper is fringed with black bushes of the metal, which in growing change color to white without any alteration of crystalline form that can be detected by a powerful microscope. A stronger solution gives white crystals from the commencement, which frequentlyassume the appearance of fern-leaves; while the growth from a still stronger liquid reminds us rather of a furze-bush. If the nitrate of silver amount to fifteen per cent, or thereabouts, there occurs a steady advance of brilliantly white moss; and, if the solution be saturated, or nearly so—say forty per cent.—this moss is very sturdy, often ending in solid crystalline knobs, or stretching out into the liquid as an arborescent fringe.
In all these cases, however, when the solution in front of the growing crystals has been somewhat exhausted, certain prominent or well-circumstanced crystals seem to monopolize the power, and to push forward through the remaining portions of the liquid. This raises beautiful branches which assume a variety of graceful forms, which it is hopeless to attempt to portray by diagrams, but the subjoined figures give some of the more characteristic outlines greatly magnified. The weak solutions produce feathery crystals, as somewhat in Fig. 1, consisting of

a straight central stem from which grow on either side crystalline rays that terminate in a sharp point, and frequently become themselves the center stem of a similar crystalline structure.
In the outlying growth of a moderately strong solution the apparent regularity of the crystalline form is lost; the main stem is built of a confused mass of hexagonal plates, while the side branches are an agglomeration of minute pointed crystals turning in every direction, and producing such jagged outlines as in Fig 2.

In still stronger solutions the branches lose every appearance of straightness, and they are built of hexagonal plates so studded with crystalline specks that the whole has the rounded appearance as in Fig. 3. The arborescent crystals that succeed the fringes, from a saturated solution, are smaller in their foliage than the last, and end in small spherical or botryoidal knobs.
Besides these various forms, there occur all kinds of crystalline combinations, as for instance the spray sketched in Fig. 4, when the long
and rough branches have terminated each in a large hexagonal plate and the flowing past of a weak solution has afterward caused the growth of delicate fern-leaves. Often, also, a large expansion will take place in every direction, though joined to the parent stem by an almost invisible thread; or, from the point of a long crystal there will branch out to right and left crescent-shaped structures, a process the commencement of which is seen in one of the side rays of Fig. 1. The last traces of silver will frequently give rise to delicate crystalline filaments wandering over the surface of the glass, as in Fig. 5.
If a piece of zinc be placed in a solution of neutral terchloride of 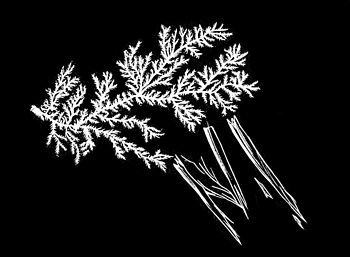 Fig. 6.
gold, containing about nine per cent, of salt, there is an immediate out-growth of black gold, which speedily changes to an advancing mass of yellow or perhaps lilac metal of lichen-like forms, from which proceed beautiful fringes of yellow or black, ending generally in such arborescent forms as are represented in Fig. 6. As these branches push into the yellow liquid, it becomes colorless even in advance of their points, and it frequently happens that yellow crystals of some salt shoot out in front of the crystallizing metal, which follows them and builds up its advancing fronds at their expense. This is shown in the figure. The gold will generally shoot its yellow branches rapidly round the margin of the drop. Such a running branch has been seen to stop on coming in contact with a loose piece of gold, which immediately in its turn becomes active, and commences to sprout on its farther side. Copper salts give round nodules, which have no crystal-line appearance when deposited from moderately weak solutions, but a very strong solution of the chloride—about forty per cent.—yields with zinc, first a thick, black growth, then arborescent fringes of red metal, terminating in crystals of very appreciable size.
The fringes referred to in the case of these three metals are still more characteristically developed by bismuth.
When a solution of the terchloride of bismuth acts on zinc there is an immediate outgrowth of black fringes, as in Fig. 7, where they are seen on an illuminated field. As they advance, these become more arborescent, and as the crystalline character becomes more developed they change from black to gray. Sometimes bismuth presents itself in botryoidal masses, but the tendency to form the fringes is very strong.
Chloride of antimony with zinc also gives black fringes. Lead salts yield crystals resembling those of silver, but leaves of irregular, hexagonal plates prevail, and frequently become of large size.
A solution of acetate of thallium, of twenty per cent, of salt, quickly gives a beautiful forest of thorny crystals. Sulphate of cadmium gives rise to a small, leaf-like growth on zinc; but a strong solution of the chloride produces an appearance of sticks covered with small spines or knobs. The new metal indium is thrown down upon zinc in the form of thick, white crystals. The deposition is promoted by touching the zinc with a piece of iron.
Tin gives beautiful results. If zinc be placed in a solution of stannous chloride it is quickly surrounded with a growth of prolonged octohedra, and as these advance into the liquid it is easy to observe that the additions of new metal commence at the apex, and that the wave of chemical change proceeds down the lateral edge, occupying some seconds of time in depositing the new layer of material. Frequently, also, there is a luxuriant growth of large, flat leaflets, or symmetrical structures resembling fern-leaves, but with the fronds arranged at right