The Sympsychograph, by the founding president of Stanford University 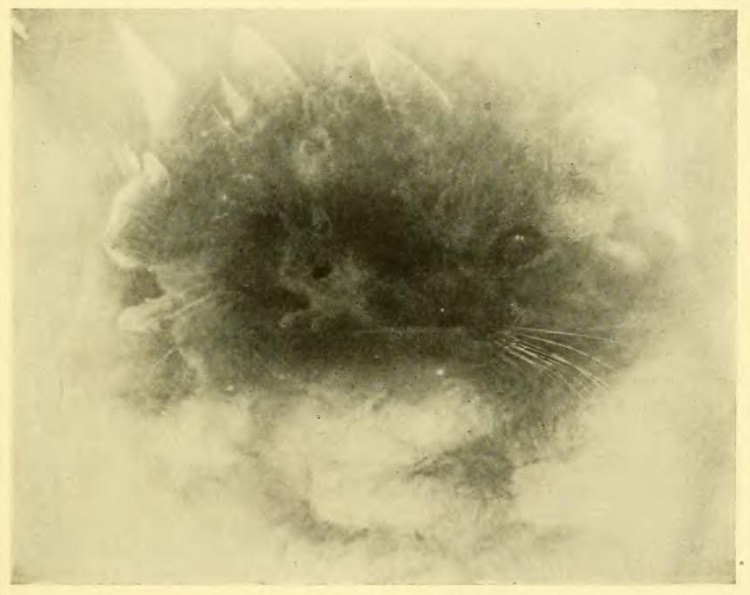 It will be noticed that this picture is unmistakably one of a cat. But it is a cat in its real essence, the type cat as distinguished from human impressions of individual cats. This achievement, like the earlier ones of Odin, Röntgen, Rogers, and Lee, opens great vistas for future scientific research. The next experiment will be by similar means to photograph the cat's idea of man.
As might be expected in a first attempt, there is a lack of coordination of the parts. Mr. Gridley, the schoolmaster, had planned his cat on a large scale, a huge cat face with gray radiant whiskers looking directly at the beholder. Most of the others thought of the cat in lateral view or profile. These variant and vagrant individual impressions naturally appeared on the camera before the ether waves were co-ordinated and the reflex influences came back from all to one, regulating and co-ordinating the thought of the cat. Thus these preliminary impressions are recorded as ghost pictures in various places about the plate before the ultimate composite view was achieved. The delay in this regard has darkened the center picture, interfering a little with its perfection of definition. This darkening would probably appear in other experiments on account of the long exposure (sixteen minutes) thought necessary for a picture of this kind, in which odic magnetism is made to take the place of light.
On the cat's cheek is a curious black spot or stigma which has not been fully accounted for. From its sharpness of definition it must stand in some relation to each of the seven persons whose thoughts were centered upon it. One suggestion was that this was the blind spot on the retina in each of the sympsychographers. But the blind spot marks the point of entrance of the nerve which goes back to the brain. While it may not have visual power, it is not unlikely that it is a point of special activity in ideography. This suggests that the black stigma may be the yellow spot, or the macula hifea, the point of acute vision, a region on the retina where odic forces would naturally be absent. Mr. Marvin himself inclines to the opinion that a microscopic examination of the negative will show that this stigma has like- wise the form of a cat, and that it will be found to be an ideomorphic germ or centrum where the co-ordinate thought of the cat has first impinged on the plate and from which the image of the cat has concentrically arisen.
Meanwhile the cat of Mr. Thompson, the janitor, who alone could answer this question, lay in the darkness under the warm stove and purred softly.
Mr. Jordan had to write in to the science-rag, to try and redeem himself somewhat -

THE MORAL OF THE "SYMPSYCHOGRAPH."
Editor Popular Science Monthly:
Sir: I was both surprised and humiliated to find on my return from Bering Sea, a few days ago, a large correspondence from persons who had taken the "Sympsychograph" seriously. I had not the slightest idea that any one capable of "reading bound books" would be deceived by the meaningless phrases in that bit of burlesque. I intended it as a piece of gentle satire on the "wizards" and "impressionists" who follow in the wake of scientific work which attracts attention, and who pour their vagaries into the long ears of the daily newspaper.
The important element of one's belief arises from the way in which that belief is formed. No one was capable of understanding my story who did not at once see the incongruity of it. One might as well believe in Mahatmas and Odic forces as in cathode radiation or evolution if he does not have any clear ideas or a clear conception of the basis on which generalizations rest. One writer speaks of the article in question as a hoax upon an innocent public; but a public which has swallowed the alleged experiments of Inglis Rogers and other impressionists as scientific truth, and does not see any difference between the methods of these persons and the methods of Röntgen and Helmholtz, is not an innocent public. A vast amount of suffering In our society arises from the fact that men are ready to follow any notion in medicine, in politics, or in social reform, no matter how absurd, if it contains an element of mystery, or if it proposes to make life a little easier for men incapable of clear thinking.
I had a serious moral in the fable, and this, at the risk of trying to explain a joke, I shall give.
The methods ascribed to the "Astral Camera Club" are those which never have yielded and never can yield any results to science. Scientific investigators are not "wizards," their discoveries are not presaged by uncanny feelings nor green darkness, nor is there anything "occult" about their ways of working. They are simply men of unusual persistence and steady common sense. Everything easy was found out long ago, and additions to knowledge can only come from mastery of past achievements and mathematical accuracy in the registration of small details. The progress of science is not marked by surprises and contradictions. The result of scientific inquiry comes as a surprise only to those ignorant of the steps in investigation which leads up to it.
The discovery that the peculiar rays called "X" by Röntgen could be made to cast shadows on a sensitized plate does not imply that thought can be photographed. One might sooner expect to photograph the songs of birds than "the cat's idea of man."
The great power which exact knowledge gives adds nothing to the probability of the mythology of our own or other times. The "power of mind over matter" is not a form of hysterics. It depends on exact knowledge of the nature of material things. It is no occult influence showing itself in neurotic "adepts" by uncanny lights, under "astral" conditions. It is greatest by daylight, with sane men, with whom science is simply enlightened "common sense."
David Starr Jordan.
Palo Alto, Cal., October 10, 1896. 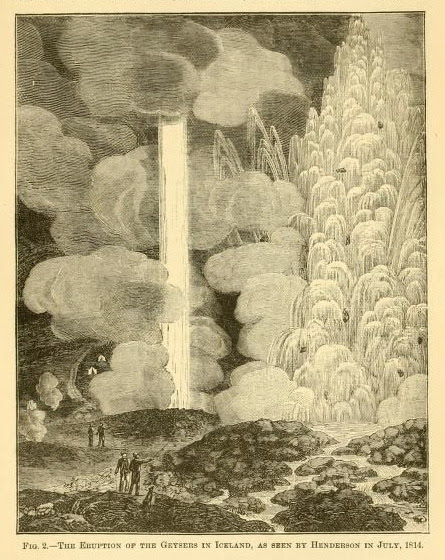