The High Voltage Beatification of Professor Bose at Wittenburg 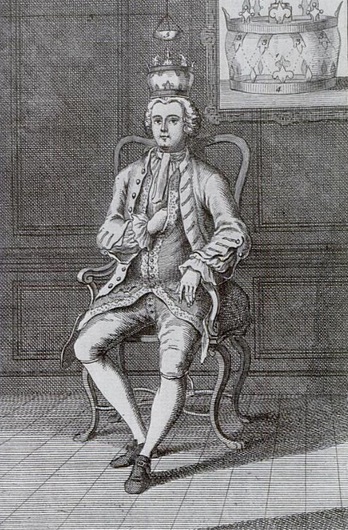 In 1737, a poet/physicist at the University of Leipzig, Georg Matthias Bose, became enthalled with the electrical experiments of Hauksbee, Shilling and Dufay. After constucting a static electric generator (little more than a rotating glass sphere with a friction rubber of fur and a brass conductor), he proceded to conduct demonstrations such as the electrical kiss (Venus electrificata, the attempted osculation of an electrified young lady) and his pièce de résistance, Beatification.

His poetic nature enabled him to describe the process of Beatification in such woolly terms, that he had the monopoly on the demo. No-one could replicate his production of a halo hovering above the cranium. It was trickery, in so much as it required an evacuated crown to be worn, with a highly electrified conductor above that. Rackstrow managed to replicate the process in 1748, as shown in the engraving above. However, the controversy raged for many years.... Quarterly Journal of Science, and Annals of Mining, Metallurgy ..., Volume 8, 1871