On Christmas day 1179, at Oxneyfield, south of Darlington, a sudden subsidence created the Hell Kettles. These sink holes were formed by subterranean water flows, which dissolved the evaporite gypsum in bedded in the Permian rocks. Originally there were four, of which one was filled and two became connected to form the double kettle. 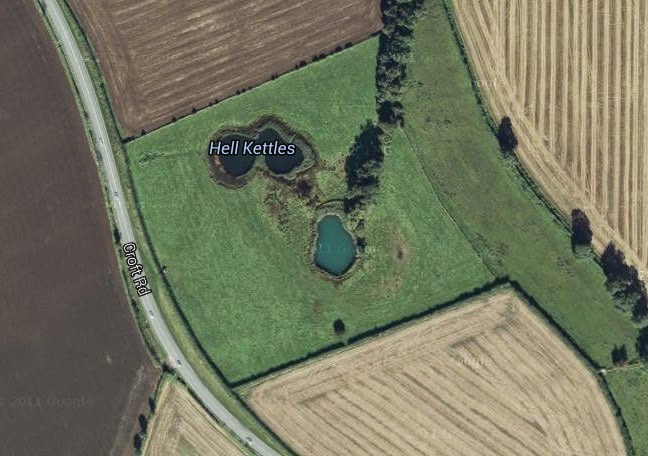 As can be seen in the above aerial photo, the southern-most sinkhole is a different colour to the double kettle. The lower pond being fed from a subterranean source, the upper from surface runoff. 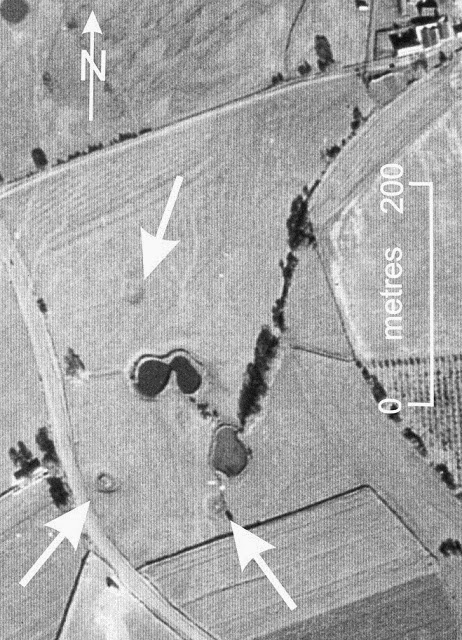 This image from Seismic reflection survey for investigation of gypsum dissolution and subsidence at Hell Kettles, Darlington, UK
Quarterly Journal of Engineering Geology and Hydrogeology, v. 42:31-38
Abstract from ths article -

"There are thick beds of gypsum in the Permian Zechstein sequence which forms the bedrock in the Darlington area. In this area, subsidence features attributed to gypsum dissolution are typically broad shallow depressions up to 100 m in diameter, and the ponds known as Hell Kettles [NZ 2814 1088] are the only recognized examples of steep-sided subsidence hollows around Darlington. We have acquired a loose grid of eleven 2D seismic reflection profiles and a 3D seismic reflection survey in the area around the ponds. The 2D profiles have revealed evidence of foundering in the limestone of the Seaham Formation at depths of ~50 m. The foundering is interpreted to have resulted from dissolution of gypsum in the Hartlepool Anhydrite Formation at ~70 m depth. The reflection images of the gypsum itself are discontinuous, suggesting that its top surface has karstic topography. The 3D survey has revealed sub-circular hollows in the Seaham Formation up to 20 m across, which are again attributed to foundering caused by gypsum dissolution. The results demonstrate the potential of the seismic reflection method for site investigation where there is a subsidence hazard due to the possible presence of subterranean cavities."

Their formation in 1179 was a spectacular event, as can be gathered from this account -

The Hell Kettles are a Site of Special Scientific Interest (SSSI). Here's the description from the SSSI notification -

Although other water bodies overlie the Magnesian Limestone Formation in County Durham, Hell
Kettles, which are recorded as having originated in 1179 due to natural subsidence, are of importance as the only site in the county where open water fed by calcareous springs occurs. This is the only site in County Durham with saw-sedge dominated swamp, a vegetation type showing relationships to fens elsewhere in Britain notably East Anglia. Additional interest is provided by stands of tall fen and damp grassland containing a rich assemblage of wetland plants, including several which are rare or local.

Scattered trees and shrubs, including alder Alnus glutinosa, grey poplar Populus canescens and hawthorn Crataegus monogyna occur on earth banks, beside a ditch and on the margins of the ponds.

The long history of botanical recording at this site, going back to 1777, is of particular note whilst subsequent records provide a detailed account of the floristic changes which have taken place in the past two centuries, including the loss of a number of notable wetland plants. 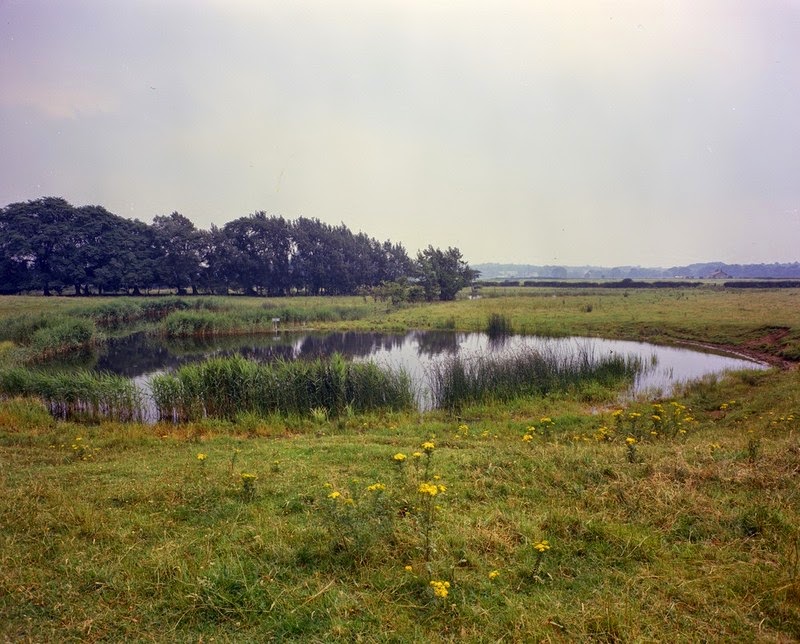 This from 1587, Holinshed's Chronicles of England, Scotland, and Ireland,  Chapter 24, Of the marvels of England.-

"What the foolish people dreame of the hell Kettles, it is not worthie the rehearsall; yet to the end the lewd opinion conceiued of them may grow into contempt, I will saie thus much also of those pits. There are certeine pits, or rather three little pooles, a mile from Darlington, and a quarter of a mile distant from the These banks which the people call the Kettles of hell, or the diuels Kettles, as if he should séeth soules of sinfull men and women in them. They adde also, that the spirits haue oft beene heard to crie and yell about them, with other like talke sauoring altogether of pagan infidelitie. The truth is, and of this opinion also was Cutbert Tunstall late bishop of Durham, a man (notwithstanding the basenesse of his birth, being begotten by one Tunstall vpon a daughter of the house of the Commers, as Leland saith) of great learning and iudgement, that the cole-mines in those places are kindled, or if there be no coles, there may a mine of some other vnctuous matter be set on fire, which being here and there consumed, the earth falleth in, and so dooth leaue a pit. Indéed the water is now and then warme (as they saie) and beside that it is not cléere: the people suppose them to be an hundred fadam déepe. The biggest of them also hath an issue into the These, as experience hath confirmed. For doctor Bellowes aliàs Belzis made report, how a ducke marked after the fashion of the duckes of the bishoprike of Durham, was put into the same be|twixt Darlington and These banke, and afterward séene at a bridge not farre from master Clereuar house."

This (rather rambling) account of the sink holes is from The History and Antiquities of the Parish of Darlington, in the Bishoprick, by William Hylton Dyer Longstaffe, 1854 -