Victorian Tesla Coil, with reference to a possible medieval coil

Victorian Tesla Coil, with reference to a possible medieval Coil. A letter from Ernest Glitch (son of Mad Judge Glitch) to Michael Faraday appears to note the discovery of Germanium some 30 years before Winkler.

What an eventful month here at Glitch Mansion! Hodges has finished the five thousand cell galvanic battery in the stables! I urge you to travel to Weardale as soon as possible. I must have another intellect here, one capable of comprehending the quite astounding powers I am unleashing! Faraday, I have made lightning! Huge thundering continuous bolts of actinic energy!

The power of the stables battery is phenomenal Faraday. The five thousand copper and five thousand zinc plates, each having an area close to a square yard, I had Hodges fabricate in his spare time. The glasswork I had blown in Sunderland. Each cell holds a gallon of electrolyte. The entire floor space of the stables is now covered by the battery. Hodges has had to move his bedding and meagre possessions to the pitchblende boiling shed. The cells of the battery are connected using some five thousand silver bars. All the connecting bars are rounded and highly polished. I break the connection at several places, when the battery is dormant, in order to prevent the waste of chemical power by the beautiful, yet draining, violet brush discharges.

My assistant does not enjoy the disconnection and electrolyte draining processes, since the individual attention to each cell requires some fifteen seconds of his time. The violence of the direct discharge is such that I am told it can be heard quite distinctly in Frosterly. Hodges` ears suffered profuse bleeding during my early ball lightning experiments, such is the concussion of discharge. He now fills his ears with hog fat before we work.

The galvanic battery charges my leyden battery such that half inch discharges occure at the incredible rate of around two hundred to the second. In the courtyard I have removed my fathers power gallows, and in its place have constructed my lightning machine. The electricity is communicated from the stables battery to the courtyard via two long silver rods one half of one inch in diameter. A huge degree of danger surrounds these rods. I have Hodges ensure that all livestock are removed from the vicinity, but on one occasion the buffoon allowed a bullock to blunder into our experimental area. Its last act was to smell one of the rods. The beast dropped as though hit with a .577 nitro-express round.

I had Hodges build the lightning machine somewhat like that depicted in the attached copy of a medieval drawing. 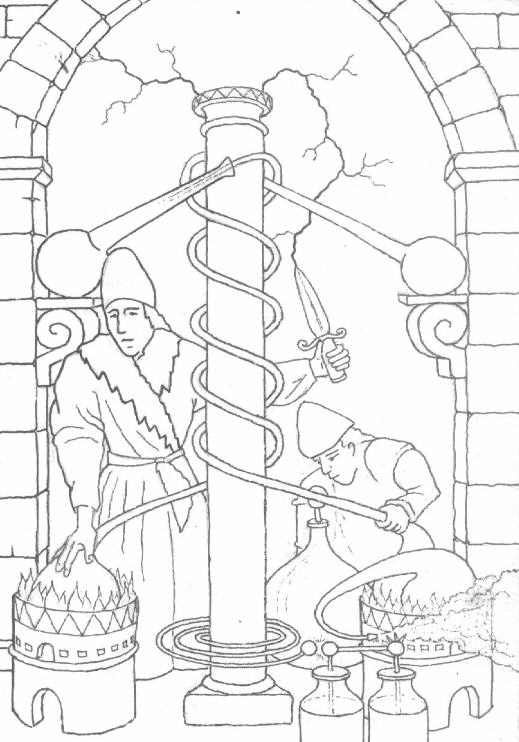 As far as I can gather from the family record vaults, these electro-alchemists are the ancestors of both myself and Hodges! On examining the drawing, it can be concluded that electricity was gathered from steam, and stored in those remarkably modern looking leyden jars (Musselbroek perhaps had access to early Glitch alchemical papers, eh? Faraday!)

The manufacture of a spiral coil from solid silver rod afforded Hodges no end of difficulty, and I must admit to severely thrashing him on one occasion. The man feigns illness and disability in an exasperating manner. I am fully aware that some of his medical problems are in-part due to the dangerous and noxious experiments he performs. But he uses these slight infirmities to shirk from a full sixteen hour day. I remind him that lead mining is equally dangerous, although he maintains that scrotal de-glovement by halogen gases is rare in the mines. 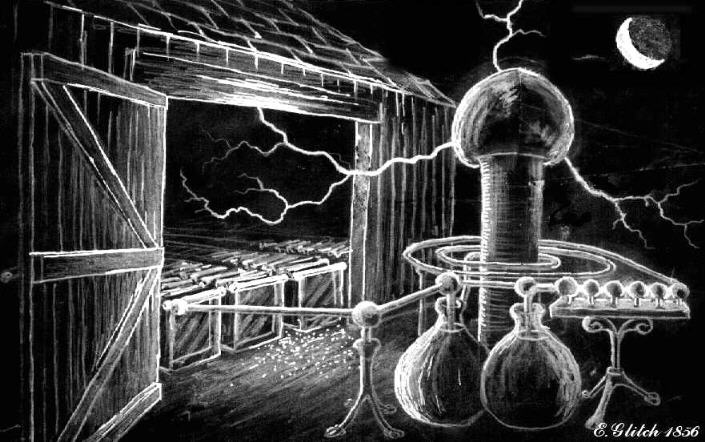 Returning to the lightning machine, its second coil is of silk covered copper wire with perhaps ten gross of turns. Hodges spent many an hour applying shellac to the beautiful, Sunderland manufactured glass phallus, before winding on the copper. He had made a grand job of silvering the bell-like top dome, and I allowed him a few hours of private time off. He tinkers with scrap in a makeshift, ramshackle laboratory he has set up next to the cess-pit. I think he is endeavoring to extract a new metal from flue dust he`d obtained from the long Nenthead chimney. He has predicted its properties, and has measured its atomic weight to be 72. He is attempting to crystallise this metal for the purpose of some obscure electrical daydream involving an electrical one-way valve.

Hodges has, however, a sharp mind and the adjustments necessary for the correct function of the lightning machine would have been beyond my impetuous nature. He maintained that the first discharge path (concerning the giant thin twin leydens and the silver coil) and the second discharge path (concerning the silvered bell-end and the copper coil), should be attuned together like bells of the same tone. He spent many days with these adjustments. The wolfram electrodes of the sparking gaps would glow red after brief intervals of lightning production, as he tried to achieve balance. The intense light from the sparking gaps has darkened Hodges skin to the colour of mahogany except for those patches which had blistered, which are salmon pink. It is somewhat of an improvement since his dreadful grey pallor (induced by either mercurial silvering or by the concentration of glowing barium) was causing me to wonder if I'd soon be galvanically re-animating his corpse.

Hodges' appearance occasioned much hilarity last Saturday, when the Bishop of Durham was visiting. He could hardly believe Hodges and I share the same amount of years upon this earth! Hodges doesn't make a pretty picture Faraday. His face and forearms piebald as previously mentioned, he has no hair because of the reduction of pitchblende, his right eye sports a blue opaque cast to it and his groin bulges with scar tissue. Add to this, the constant thin dribble of rancid hog fat from his ears, and it is beyond my comprehension as to why Maud the maid finds him so appealing.

I digress. The lightning machine Faraday! The lightning produced is of a different form to that of mother nature. It is more or less continuous, a writhing, branching, changing thing of great beauty. The bolts from the machine appear devastatingly powerful, the light and sound being so phenomenal - but this is an illusion! On one occasion I had Hodges take the full discharge of perhaps three yards in length directly onto his bald pate. Only a slight burn resulted. I cannot account for this. Had Hodges taken the half of one inch discharge from the leyden jars, for a similar time and to the same bodily locality, he would most surely have expired.
I once again urge you to come to Weardale to witness this unparalleled phenomenon.

P.S.
My son Rupert sends his regards and has recently began an investigation into the properties of the glowing barium salts. It is so encouraging to see him busy with non-explosives. He has demonstrated to me that a gold leaf is discharged quickly in the presence of the salts, and that all the animals he has caged with a phial of the salts sicken and die. I think perhaps that a poisonous effluvium is emitted from the luminous substance. Rupert also has found that the dim blue glow can be augmented to a brilliant degree, and altered to green, by the admixture of sulphide of zinc. He also has demonstrated to me the quite astonishing sight of a veritable sea of coruscations and scintillations when the mixture is seen through his microscope. For a ten year old, these experiments are harmless amusement, but the procedures will stand him in good stead when he is older, and gets to grips with some real science.
E.G.


WARNING - Many subjects outlined within this site are extremely dangerous and are provided here for information only. Please don`t experiment with high voltages or chemicals unless you are fully conversant with safe laboratory practices. No liability will be accepted for death, injury or damage arising from experimentation using any information or materials supplied.
Posted by Unknown at 11:39