The spontaneous combustion, or luminous oxidisation, of marsh-gases containing phosphoretted hydrogen. Will o' the wisp is an elusive natural phenomenon. It is an occasional flickering glow or dim flame, appearing over swamp or marsh-land.

Marsh-gas, or methane CH3 is formed from rotting vegetation and bubbles up from submerged mud. The methane can have an admixture of phosphoretted hydrogen, depending upon the nature of the rotting organic matter (a dead fish in anaerobic mud would be ideal).

Ignited methane will-o'-the-wisps will appear yellowish. Many accounts of the phenomenon say the colour is bluish. This could be the ignition of hydrogen sulphide gas, which is also evolved from rotting organic matter. On a purely speculative note, it would be interesting to replace the phosphorus in Smithells cold flame experiment with liquid hydrogen phosphide (a deadly poison), using no heat. If the result is the same, then the flickering green-glow type will o' the wisps could be accounted for, by the luminous oxidisation of hydrogen phosphide vapour, carried into the atmosphere by methane (non-ignited) or carbon dioxide gas.
WARNING - This gas is extremely poisonous 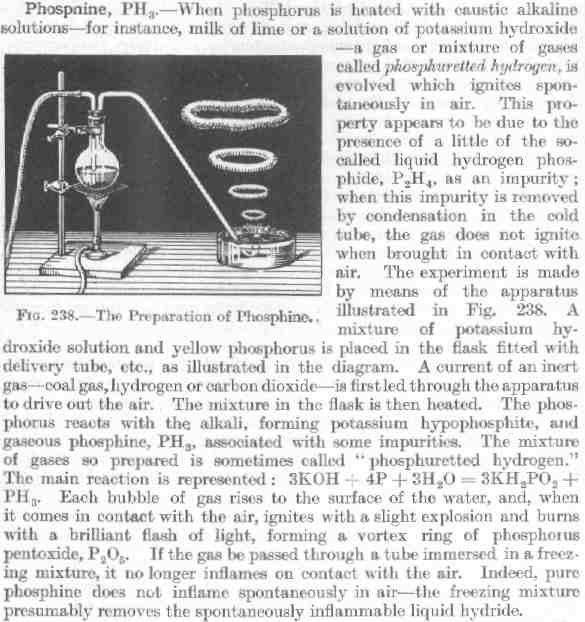 The glow of phosphorus was minutely studied by Boyle, who found that solutions in some essential oils (oil of cloves) showed the same character, whilst in others (oils of mace and aniseed) there was no phosphorescence. He also noticed a strong garlic-like odour, which we now know to be due to ozone. Frederick Slare noticed that the luminosity increased when the air was rarefied, an observation confirmed by Hawksbee and Homberg, and which was possibly the basis of Berzelius’s theory that the luminosity depended on the volatility of the element and not on the presence of oxygen. Lampadius, however, showed that there was no phosphorescence in a Torricellian vacuum; and other experimenters proved that oxygen was essential to the process. It depends on the partial pressure of the oxygen and also on temperature. In compressed air at ordinary temperature there is no glowing, but it may be brought about by heating. Again, in oxygen under ordinary conditions there is no phosphorescence, but if the gas be heated to 25° glowing occurs, as is also the case if the pressure be diminished or the gas diluted. It is also remarkable that many gases and vapours, e.g. Cl, Br, I, NH3, NO2, H2S, SO2, CS2 inhibit the phosphorescence.
Schenk's Scarlet Phosphorus. Phosphorus tribromide is prepared by gradually adding a solution of bromine in carbon disulphide to dry red phosphorus. The function of the carbon disulphide is to moderate the violence of the reaction. (If liquid bromine is dropped on red phosphorus in a cooled flask, the tribromide is formed with the evolution of light. White phosphorus explodes in contact with bromine.) The pure tribromide can then be fractionally distilled from the disulphide (CS2 46o, PBr3 174o) as an unpleasant mobile liquid. White or red phosphorus can now be dissolved in the tribromide to form a 10% solution. If this solution is boiled in a reflux still for about 10 hours, a fine scarlet amorphous powder is thrown down.

White or Yellow Phosphorus. A translucent white wax-like solid, stored under water because of its spontaneous combustion when exposed to the air. Below 5.5° it becomes brittle and the crystalline structure can be seen by etching a cooled stick of phosphorus in dil. nitric acid. Very soluble in carbon disulphide - 9 parts P to 1 part CS2. Partington -

"On evapouration out of contact with air, the solution in carbon disulphide deposits crystals. Large transparent regular crystals, usually rhombdodecahedra which display a play of colours resembling that of diamond, are formed by the slow sublimation of phosphorus in an evacuated tube, one end being kept cool by a moist cloth. The tube is preserved in the dark, since on exposure to light the crystals become red and opaque."

Red Phosphorus. Used in the striking surface on safety match-boxes. Stable. Obtained by Schrotter in 1845 by heating white phosphorus for a few hours at 250° in a flask filled with nitrogen. The liquid deposits a red powder, and finally solidifies to a purplish-red mass. Can be prepared by the action of a silent or spark electrical discharge on the white allotrope.

Hittorf`s Metallic Phosphorus. In 1865 Hittorf heated red phosphorus in a sealed tube at 530o. The upper part of the tube was kept at 444o . Brilliant opaque monoclinic, or rhombohedral, crystals sublime. Can also be prepared by dissolving white phosphorus in molten lead in a sealed tube. 500° for 18 hours. Upon slow cooling, Hittorf's allotrope crystallises out. The crystals can be revealed by dissolving the lead in dilute nitric acid followed by boiling in conc. hydrochloric acid.

Beta-Black Phosphorus. density 2.69, M.P. 587.5° fairly good conductor of electricity, formed irreversibly from white phosphorus at 200° under a pressure of 12,000 Kgcm-1. If a trace of sodium is present under the same conditions, then Violet Phosphorus is formed, with a slightly lower density. 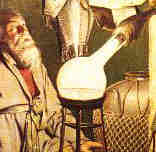 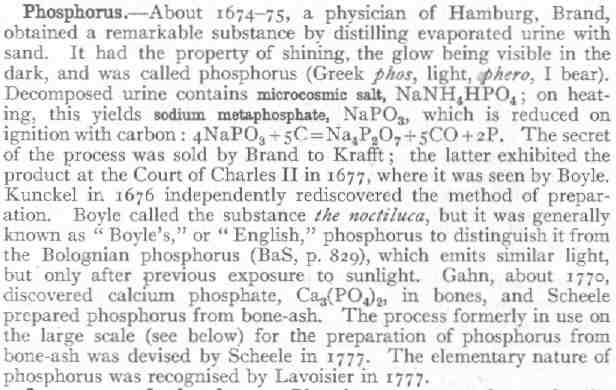 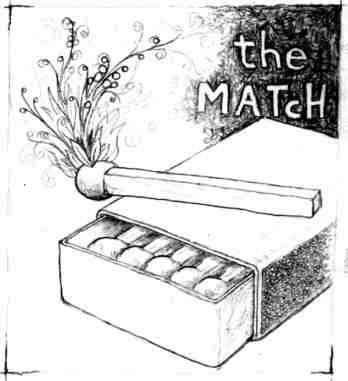 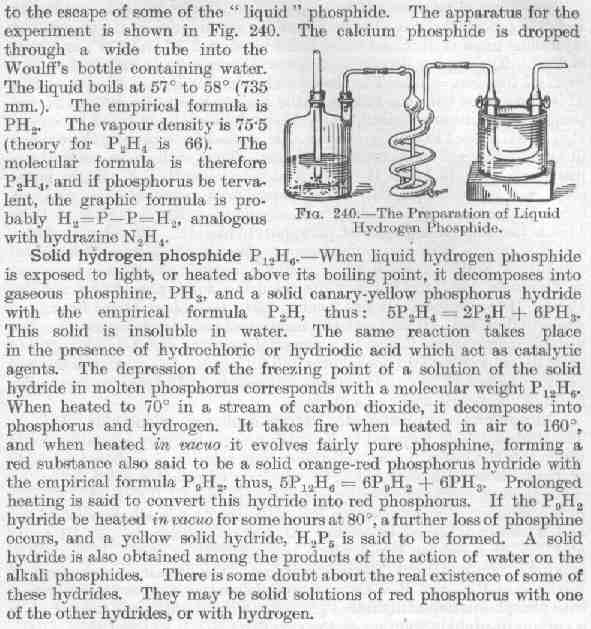 Modern Inorganic Chemistry, Mellor 1934
The skeletal material of animals is first digested with a solvent such as benzene, carbon disulphide, ether or chloroform. Fatty organic matter is thus removed. The degreased bones are then digested with water in a pressure cooker. Gelatinous matters - glue - is thus removed. The degelatinised bones are then heated an iron retort, out of contact with the air. Liquid products such as bone oil distill over, and are thus removed. A residue of animal charcoal remains, which is then heated in the air to burn off any remaining organic matter. Bone-ash remains, which is impure calcium phosphate. Ca3(PO4)2. This is then heated in an electric arc furnace with sand and coke, and phosphorus distills over.

An Autonomous Phosphorus Rendering Engine. In the mid eighteen-hundreds an attempt was made to fully automate phosphorus production. A self-powered (coal fired steam) autonomously mobile machine was designed to move about agricultural land, harvesting animals for the phosphorus in their bones. 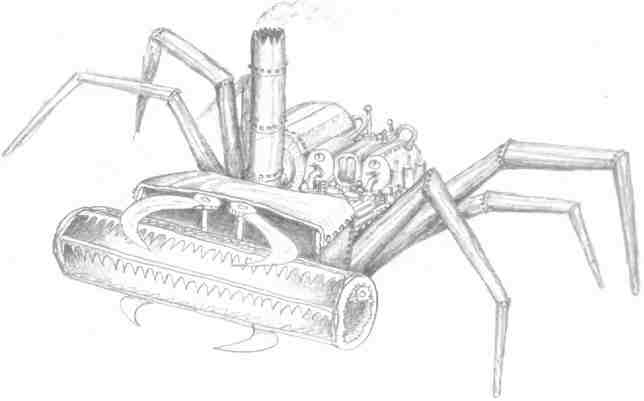 Mummified meat, glue and Dippel's bone oil were welcome by-products of the rendering & processing machine. An account in the February 20th 1861 issue of The Weardale Farming Gazette encourages interest in farming for phosphorus, then becomes more cautionary, as this excerpt illustrates--

"The problems of phosphorus farming are manifold and beset with danger. Ernest Glitch of Weardale has produced a steam powered mechanical bone stripper which can autonomously harvest phosphorus from any concentration of livestock. The deboned flesh is mummified during the phosphorus production.

During a recent Royal visit to the North of England, a demonstration of this machine went sadly wrong. The decimation of the Royal Entourage by the errant Rendering & Mummification machine left Queen Victoria in a state of apoplectic shock. Sixteen pounds of yellow phosphorus was harvested from the court officials, servants, hand-maiden and a Minor Royal. After the carnage, Mr. Glitch presented the phosphorus to Her Majesty, in an attempt to gain Royal patronage of his invention. The burns on Her Royal Highness` hands are said to be slowly de-ulcifying, and this writer hopes that phossy-jaw does not set in.

Her Majesties Government has indicated that present agricultural machinery is entirely sufficient for Britannia's needs, phosphorus stocks presently show a surplus for match production and that demand for mummified meat remains low.

The War Department has, however, shown great interest - Mr. Glitch is presently modifying his rendering-engine for battle-field use." 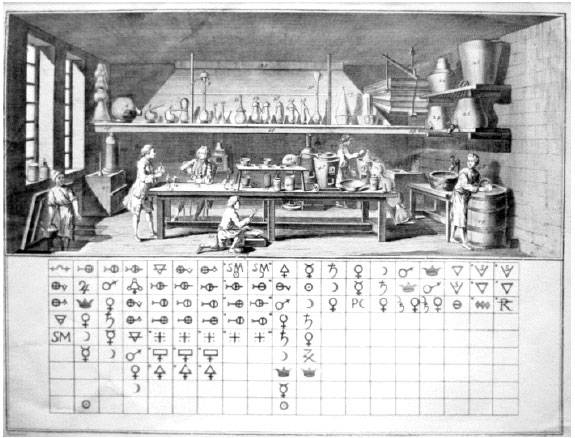 WARNING - Many subjects outlined within this site are extremely dangerous and are provided here for information only. Please don`t experiment with high voltages or chemicals unless you are fully conversant with safe laboratory practices. No liability will be accepted for death, injury or damage arising from experimentation using any information or materials supplied.
Posted by Unknown at 11:48