Ozone, which liquifies as an explosive indigo-blue liquid & solidifies as violet crystals,
was produced in prodigious quantities by a huge 18th century high-voltage generator 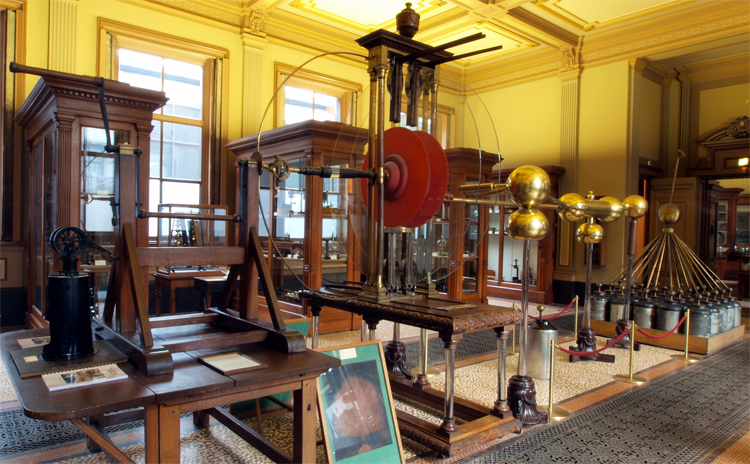 The voltage developed, almost three quarters of a million volts, was easily capable of overwhelming and arcing over the leyden jars. Controlled discharges from the leyden battery were of formidable energy --
During the operation of the machine, spectacular effects were produced - "Persons within 10 feet of the plates experienced a sort of creeping sensation over them, as if surrounded by a spiders web." and, "..a thread became attracted at a distance of 38 feet."
The stench of ozone gas was most apparent during operation of the huge machine. This is not surprising, considering the high electrostatic fields, ".. a pointed wire exhibited the appearance of a luminous star at a distance of 28 feet from the conductor." 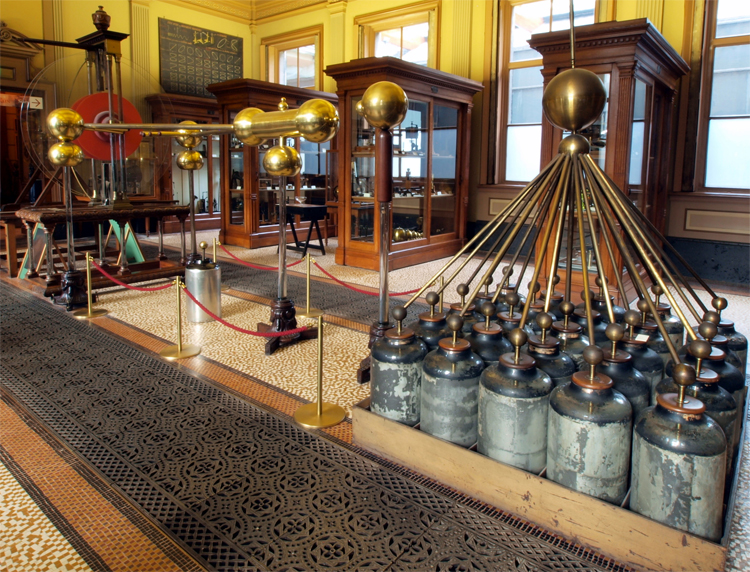 Marum`s electrostatic generator produced ozone in low concentrations, so he was unaware that a beautiful blue gas was being evolved - the colour becoming apparent only when pure. The gas remained un-named for 55 years, until in 1840, C.F. Schonbein detected the same peculiar odour in the oxygen liberated during the electrolysis of acidulated water, and gave it the name -

The passage of a high voltage, alternating electric discharge through a gas stream containing oxygen will result in the breakdown of the molecular oxygen, to atomic oxygen. Some of the atoms of oxygen thus liberated can reform into ozone, while others simply recombine to again form oxygen.

In 1857 Werner Von Siemens designed the ozone generator above, consisting of two concentric glass tubes. The inner tube has a tin-foil coating on its inner surface, the outer tube is similarly coated on its outer surface. 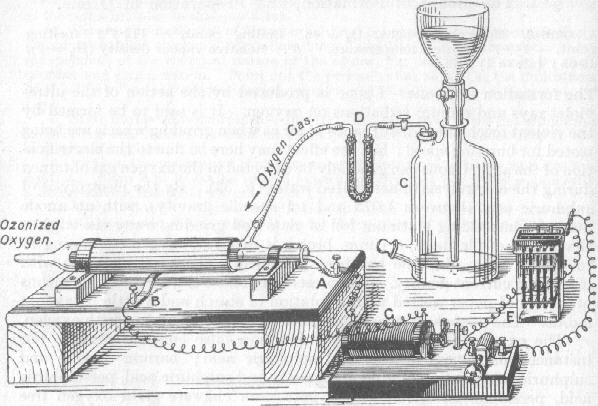 The electrical discharge must be a "corona" or silent discharge - sparks destroy ozone. The apparatus above consists -- 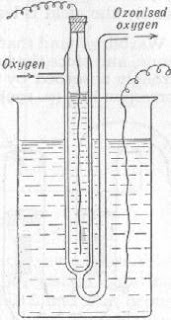 Other Methods of Ozone Production

Ozone, chemically, is the triatomic, allotropic form of oxygen having the chemical symbol O3 and a molecular weight of 47.9982. These three oxygen atoms form a relatively unstable, highly oxidative molecule that serves as a strong oxidant for many commercial and industrial applications. The gas condenses to an indigo blue liquid which is extremely explosive -

Mellor, 1934 - "... a deep indigo blue liquid is obtained which is opaque in layers 2mm thick..... the liquid is particularly liable to explode when it reaches minus 120 o" 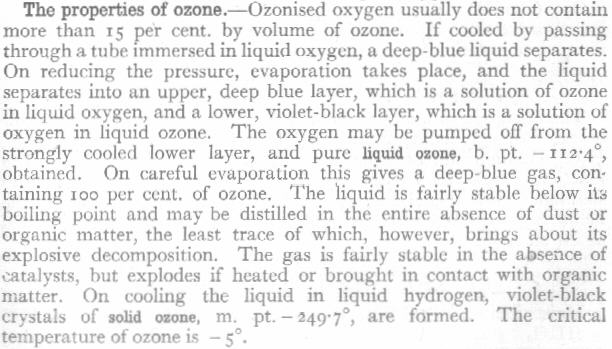 Effect on Quicksilver.   Marum noted that the gas evolved from his great machine tarnished mercury metal. The effect is more remarkable than that. The distinct meniscus displayed by quicksilver is destroyed, and the metal adheres to glass. Upon shaking with water, the mercury recovers its original form. H.B. Baker determined the reaction is due to oxidation to Hg2O, which dissolves in mercury.

The 1929 Encyclopaedia Brittanica mentions another oxygen allotrope, oxozone, under ozone -

"The least volatile portions of liquid ozone contain a denser gas of great chemical activity to which the name oxozone has been given with a molecular formula O4 (C.D. Harries, 1911)"

"...remarkable results subsequently obtained by C.D. Harries (1905 -15) by passing ozonized oxygen into solutions of unsaturated organic compounds in inert solvents.... ...In certain instances unsaturated organic compounds take up O4 at the double linkage. The products are termed oxozonides, and are regarded as being due to the presence of oxozone, O4, in ozonized oxygen. Propylene gives C3H6O4 and butylene forms both ozonide, C4H8O3, and oxozonide, C4H8O4"

Mellor, 1934 - "There is some evidence indicating the formation of an even more condensed form of oxygen than ozone when the latter is produced by a silent electrical discharge of very high voltage - 18,000 volts. The last fractions of the fractional distillation of the liquefied product furnished Harries with a hyperozone, but it has not been isolated"   Modern Inorganic Chemistry p228

WARNING - Many subjects outlined within this site are extremely dangerous and are provided here for information only. Please don`t experiment with high voltages or chemicals unless you are fully conversant with safe laboratory practices. No liability will be accepted for death, injury or damage arising from experimentation using any information or materials supplied.
Posted by Unknown at 12:29