On the Medical Properties and uses of Glonoine or Nitro Glycerine By W.H.Evans Esq, MD, Bradford. 1867 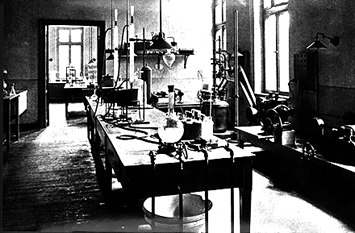 Nobel's laboratory at Krümmel in 1915.

July 1868. The Roberts Petroleum Torpedo Co. had a nitroglycerin store in the side of a hill, two miles from Titusville. Patrick Brophy went there alone to thaw some nitro, and it detonated. The largest portion of Brophy recovered was part of his hip joint. Titusville didn't do too well either. This from The Titusville Morning Herald -

"About a quarter before three o'clock yesterday afternoon our citizens were deafened and appalled by a concussion which shook every building to its foundations, prostrated men in the streets, shattered widows, and seemed veritably the crack of doom.  In an instant the streets were filled with people, looking about for the cause of the disaster, which was indicated by a spiral column of smoke rising from the northwestern part of the city.  There were but few buildings in the city that escaped the effects of the explosion.  Two panes of the large plate glass front of R.T. Hazzard's dry goods establishment were broken into minute particles and added to the general terror of the pedestrians upon the street by its crash upon the sidewalk.  Nearby the entire front of Patrick Goodwin's salon were thrown in and splintered, as were the windows of many residences upon Spring St.  In Fletcher's block large lights of glass were shivered, as were those of nearly every building upon Franklin St., clear to the bridge that crosses Oil Creek.  Several windows of the Union School Building were shattered and the scholars in all the departments rushed tumultuously out, screaming in fright.

"The force of the explosion came perceptibly from the northwest, and it is the south side of Spring and the eastern side of Franklin Streets that suffered the greatest destruction.  The force of the concussion is indicated by the fact that the bell in the Presbyterian church struck two or three times.  Chimneys were thrown down in some parts of the city, while in many houses plastering fell and doors were burst open.  People on the street said the first intimation of the explosion was the falling glass from broken windows, and before the report of the explosion reached this point a crackling sound similar to the sound of rustling paper was heard, followed immediately by the grand concussion which so startled the city and threw teams of horses to the ground.

"At once there was a rush of people towards the scene of the disaster, which lay a few rods north and east of the Driving Park beyond the city line and about one mile from the Post Office.  Hundreds of people were soon congregated near the smoking debris of what was known as The Roberts Petroleum Torpedo Co.'s nitroglycerine magazine, but no one ventured to approach it within a hundred yards.  The effects of the explosion in the vicinity of the magazine can only be imagined by those who have witnessed the terrible destruction attendant upon heavy artillery firing, or the explosion of shells upon forest and field.  For a hundred yards in every direction the earth was torn up and ploughed up as in a newly ploughed field.  Trees a foot in diameter were cut up and splintered as if by the lightning stroke, and those left standing were nearly denuded of limbs.  Heavy logs were lifted from the ground where they had lain embedded for years and hurled an eighth of a mile over the tree tops.  Stones weighing from 10 to 500 pounds were thrown over one and one sixteenth mile from the scene of the explosion, one granite boulder weighing sixty pounds being picked up near Buckland's tavern on the Hydetown Road.  The high board fence surrounding the race track was thrown in every direction, while the ground for many yards beyond the scene of destruction was covered with fresh earth, bits of timber, splinters, and fragments of the torpedo shells or cases used to contain the glycerine when in the torpedo.  The entire field occupied by the race track, together with the highway leading from the city to the trotting course, was literally covered with pieces of cast iron which in many cases, were driven far into the earth by the effects of the concussion.

"Dr. Walter B. Roberts the brother of Col. E.A.L. Roberts, who was on the ground soon after the explosion, expressed the opinion that a considerable quantity of nitroglycerin remained unexploded and there was an imminent peril of a second explosion.  He further stated that previous to the explosion, the magazine contained six thousand pounds of nitroglycerine.  He said that the only person to have been in the magazine at the time of the explosion was Patrick Brophy, employed by the company as an agent.  Brophy had stated that he intended to visit the magazine that afternoon for the purpose of thawing out some nitroglycerin.  He had received no special instructions from the company, and appears to have acted upon his own responsibility.  The fact that there was at least one victim of the explosion was plainly apparent in the fragments of a human body and little shreds of clothing which were found scattered about the fields, and were collected together by pitying hands.  The sum total of his remains ever found consisted of a few shreds of clothing and flesh, the largest portion of his body being a section of the hip joint!" 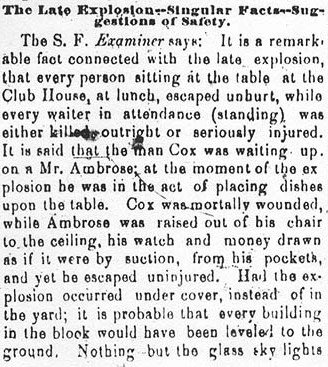 This chart illustrates the length (top) and age (bottom) of a long comet-like tail of material trailing behind a speeding star called Mira (pronounced My-rah). Mira is located in the bulb-shaped structure at right, but it is very small compared to the tail and is difficult to distinguish. The large dot in the lower left corner is another star that is closer to us than Mira.
The unique tail, discovered by NASA's Galaxy Evolution Explorer in ultraviolet light, is startlingly long, as indicated at the top half of the chart. It stretches about 13 light-years through space, which means that light would take 13 years to travel from one end to the other. For reference, the nearest star to our sun, Proxima Centauri, is about four light-years away. If you could see Mira's tail in the night sky, it would span four full moons-worth of sky.

The bottom half of the chart demonstrates the age of material in the tail. The tail is made up of gas and dust that has been shed by Mira slowly over the past 30,000 years, with the oldest material being at the end (far left) and the newest material being closer to Mira (right). This material consists of oxygen and carbon and other elements that will ultimately make their way into new stars, planets and possibly even life.

The chart also lists a few historical events that happened at various points of time in the development of Mira's tail. For example, 26,000 years ago, when material near the end of Mira's tail was just being released, Neanderthals had recently died out.