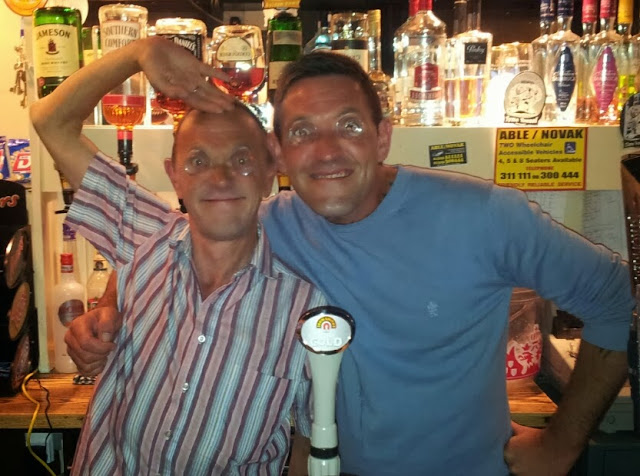 Happy train spotters at the loco

Locomotion No.1 is a lively pub on the road from Aycliffe Village to Heighington, in the North East of England. It's namesake is a machine which changed the world - Locomotion No.1, the first passenger train. The pub stands at a historic level crossing, where the Aycliffe road crosses the railway line. Here, on the 16th Sept 1825, Geordie (George) Stevenson put his just-completed Locomotion No.1 onto its rails for the first time. It is a location on earth imbued with rail history, the very point of genesis of a worldwide rail network of 1.4 million kilometres. 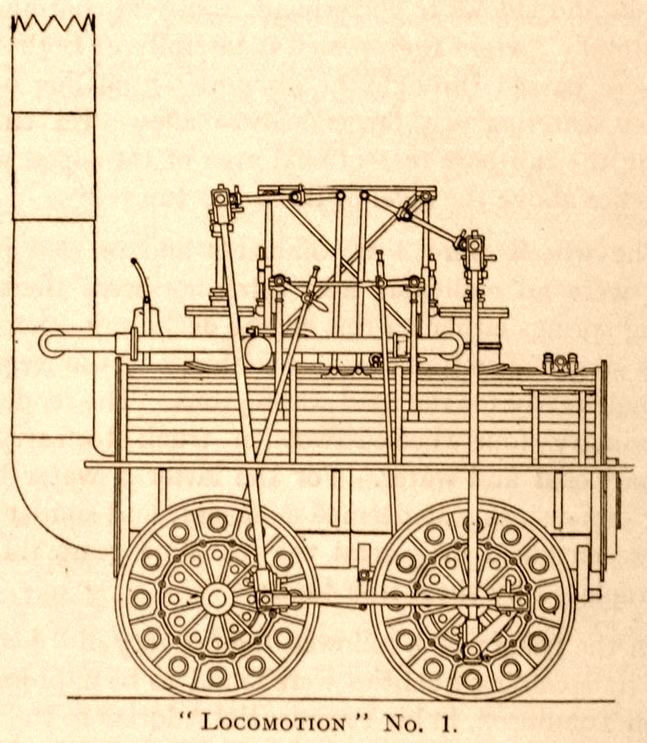 Geordie Stephenson, at a Stockton boozer after a bottle of wine in 1825 -
"Now lads, I venture to tell you that I think you will live to see the day when railways will supersede almost all other methods of conveyance in this country - when mail coaches will go by railway, and railroads will become the great highways for the king and all his subjects. The time is coming when it will be cheaper for a working man to travel on a railway than to walk on foot!"

The Pub building is listed as of special architectural or historic interest (Grade II, details here). It was originally one of the first (1835) station and booking offices on the Stockton & Darlington railway, and therefore in the world. The early 19th century part of the building has dressed stone walls with quoins. Adjacent is a small cobbled area, the only remaining part of the original east platform of 1825, it's the oldest railway platform in the world.

In 1982 the old Heighington Station building was converted into a public house - Locomotion No.1. On the outside wall of the building, a very impressive 3D representation of Locomotion has pride of place, it's a beautiful sculpture. Now, in 2013, after a period of closure, the pub has been reborn as a very tidy boozer, selling real ales and excellent wines and single malt whiskys. It gets lively and dynamic on weekends, especially when there's a band on. Throughout the week, rail enthusiasts, cyclists and businessmen pop in during the day, assured of a warm welcome by Keith & Jade, the young couple who run the pub. Of a night, regulars enjoy the ales, music and the superbly appointed pool room.

MATCHES? MATCHES? We don' need no steeenkin' matches!
When Locomotion was ready on the tracks, that fine day in 1825, Geordie realised that the logistical nightmare was not over. He'd organised the engine's transport from Newcastle to the Aycliffe Level and, with the help of the bemused inhabitants of Aycliffe & Heighington, its haulage onto the tracks, fuelling and watering. Time to light it. Unfortunately nobody had thought to bring a source of ignition.

Since John Walker of Stockton hadn't yet invented the friction match (1827), Geordie asked one of the Aycliffe residents to run down for a lantern. The spectators were underwhelmed at this point, as they'd heard they were to witness an iron horse in action. Locomotion was clearly metallic, but far from equine. “This iron hoss, why it is no more than but a steam engine set on wheels!”

The day was saved by Robert Metcalf, a navvy, who had with him a burning glass he used to light his pipe. Solar hydrogen fusion therefore played a major part on this historic day. 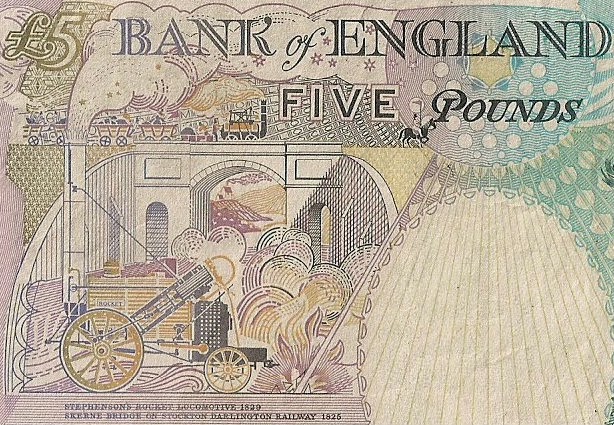 £5. Above, a cropped image from a five pound note (series E), commemorating George Stevenson, contains a stylised representation of Bobby Metcalf's contribution to events. The sun is top right, with a sunbeam lighting tinder on the ground. Upper left, Locomotion No.1 steams over Skerne bridge on the inaugural run of the Stockton & Darlington railway on 27 September 1825. In the foreground, Geordie's later creation of 1829, the Rocket. In 2003, the year this banknote was withdrawn, 54 million printed images of Locomotion No.1 existed. And were subsequently destroyed - quarter of a billion quid up in smoke! 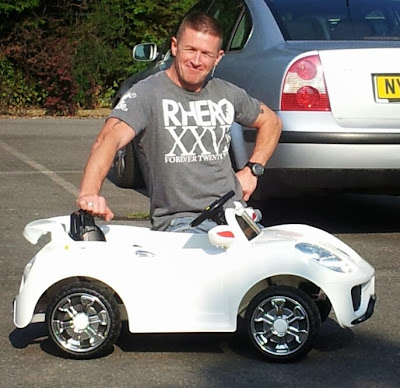 The Locomotion No.1 has a large car park, where customers with motorhomes are welcome to park overnight. Heighington station is literally a few seconds walk from the pub. Here trains can take rail nuts enthusiasts to interesting locations in both directions, after a pint and a bite to eat! North gets you to Shildon Locomotion Museum (8 mins), which houses the Sans Pareil. South gets you to Darlington Railway Centre and Museum (9 mins), which houses Locomotion No.1. Changing trains at Darlington, York National Railway Museum is half an hour away, which houses Mallard. By car, Beamish Museum is 25 miles up the road, where the Locomotion No.1 replica runs. 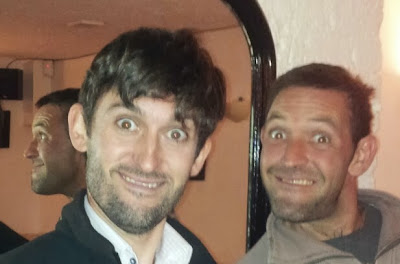 Rail enthusiasts upon their return to the Loco, after having examined
the correctly aligned steam blastpipe of the 1894 GER 2-4-0
steam locomotive No 490, at Shildon


Trains from the Loco - timetable can be found here

GREAT BALLS OF FIRE
The design of Locomotion No.1 was revolutionary, yet fatally flawed. The engine once simply "fell over" at New Shildon. Unstable nature apart, steam production proved hazardous - "The heat raised was sometimes so great, and it was so imperfectly abstracted by the surrounding water, that the chimney became almost red-hot."

Service continued even when the fatalities began in 1828.
The boiler design was highly susceptible to explosion.

The second locomotive (of the same design) from Geordie's Newcastle works was "Hope." It's boiler detonated at Simpasture on the 1st July 1828, throwing the fireman Eddie Corner 16 yards, maiming him and shattering his femur. John Gillespie, the driver, was blown 24 yards and on his way to meet his maker. He was the very first fatality on a passenger railway.

Four months later, Locomotion No.1 was trundling across the Aycliffe Level, where it had begun it's service. It blew. High velocity shards of Locomotion No.1 were scattered over nearby fields, killing a cow where  the Locomotion No.1 public house now stands. The driver, John Cree, was mortally wounded and died two days later. Water pumper Edward Turnbull's head was so badly burned, "that his face was black and speckled like a Dalmatian dog ever after."

Locomotion No.1 was repaired and continued in service for another 13 years, covering umpteen thousand miles a year. It then did it's bit as a colliery pumping engine for a while, then was very nearly scrapped. It's historic significance was fortunately recognised in 1857, was displayed at Darlington North Road station, and was eventually put on display at Darlo Bank-Top Station in 1892. 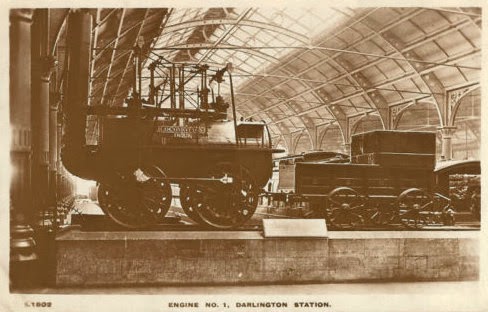 After being climbed upon by countless youngsters (including myself in the early '60s), it was moved in 1975 to the Darlington Railway Centre and Museum, located at North Road station.

Sleepers at the Loco

The pub has on display two of the 64,000 original stone sleepers which supported the tracks that Locomotion No.1 steamed along.

They are 75 kg in weight, are made from sandstone from nearby Brusselton Quarry, and have two bolt-holes where the the rails were held by fixings called chairs. The sleepers weren't up to the job, and during 1831-32 were replaced with larger, 4 bolt stone sleepers. 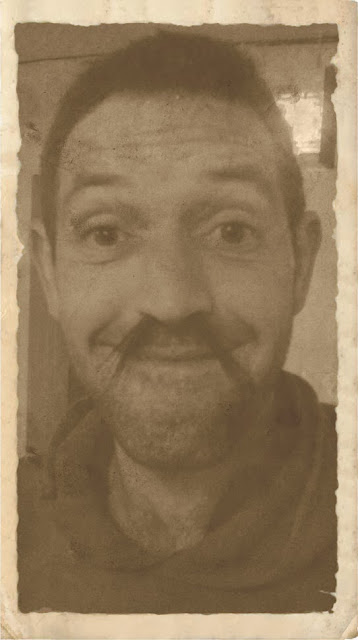 A 4-bolt sleeper, circa 1825,
judging from the nasal coiffure

LOCOMOTION out & about
The Locomotion No.1 was never to raise a head of steam again, yet took part in the Centenary Cavalcade on the 2nd July 1925 -

On this occasion, Locomotion was powered by a small petrol engine in the tender, and oily rags were burned in the grate for the smoke effect. The gentleman wringing his hands in the foreground is clearly worried about this deception. Here's some film of the event, Loco is shown about 25sec in -

LOCOMOTION Replica
A working replica of Locomotion No.1 was built by Locomotion Enterprises of Springwell and ran at the Cavalcade of steam locomotives, starting at Shildon, to mark the 150th anniversary of the Stockton and Darlington Railway. On the 31st of August 1975, the police diligently kept the the hoards of spectators well away from the tracks, as Locomotion trundled past Newton Aycliffe. I'd spent my youth illegally ferreting rabbits along the tracks, so I knew a place I could hide, then pop out next to the tracks to photograph the trains. I'll scan my photos from the day soon eventually. Here's a YouTube video of the Cavalcade - Locomotion can be seen at 9mins 10sec onwards. The replica now resides at Beamish Museum, where it is regularly demonstrated.

STEAMPUNK!
In the novel "The Ernest Glitch Chronicles," a hydrogen peroxide (H2O2) powered train is tested at the Aycliffe Level in 1854.
Ernest Glitch was a psychopathic inventor, assisted by his manservant and test subject, Hodges. The relevant chapter can be read online here

Harry, one of the Loco regulars - 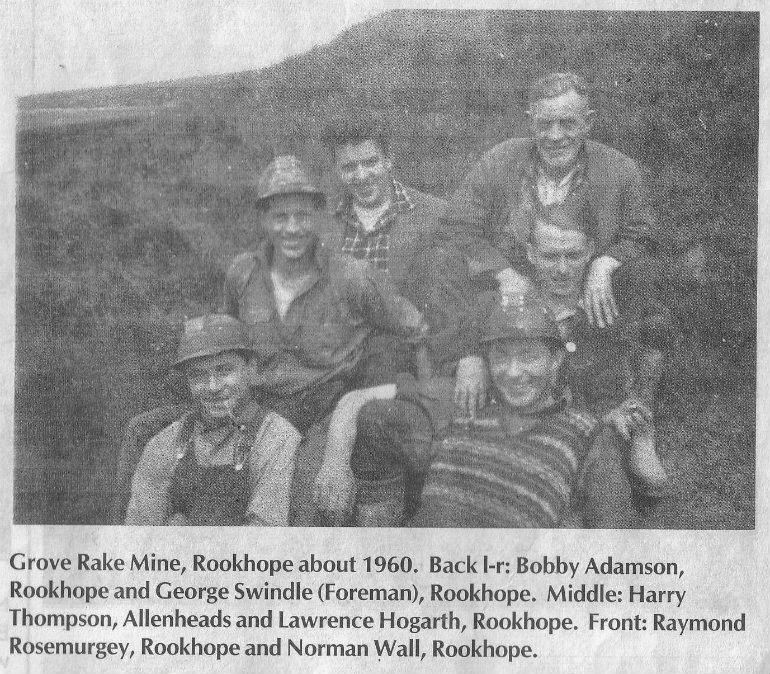 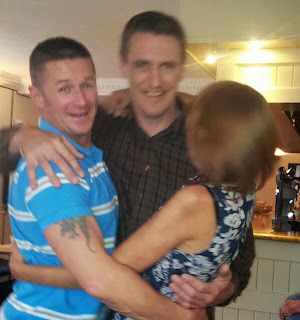 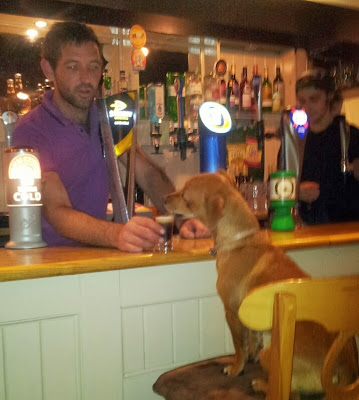 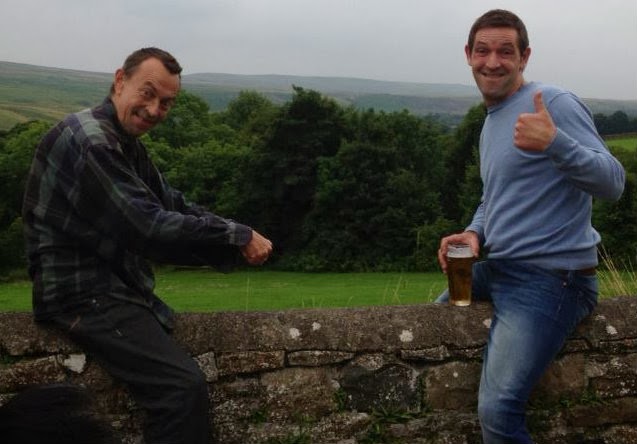 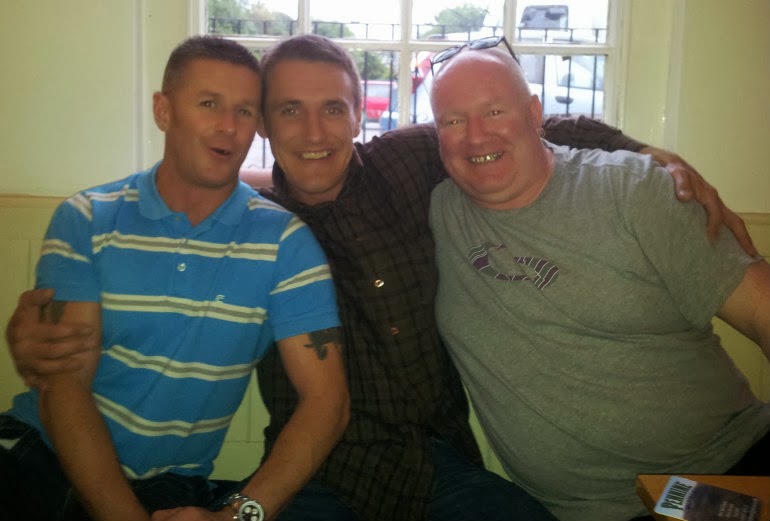 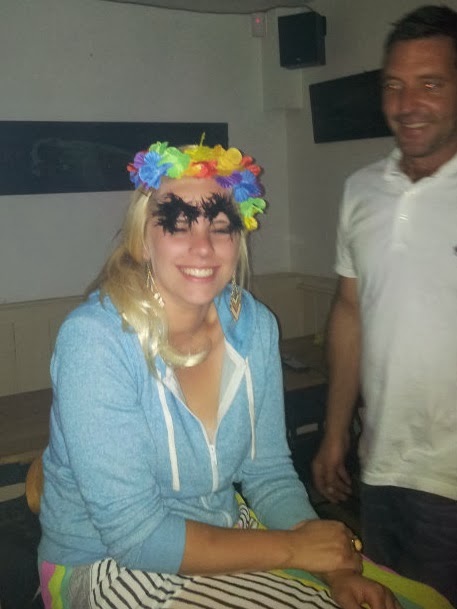 Landlady Jade, before the much needed eyebrow reduction op 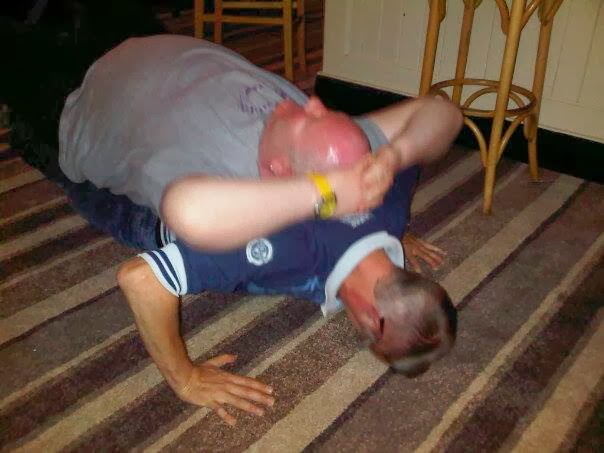 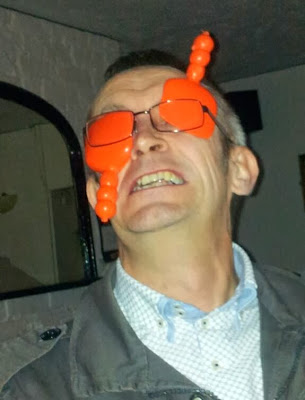 The Warehouse & Distribution Manager of a local firm, relaxing at the loco 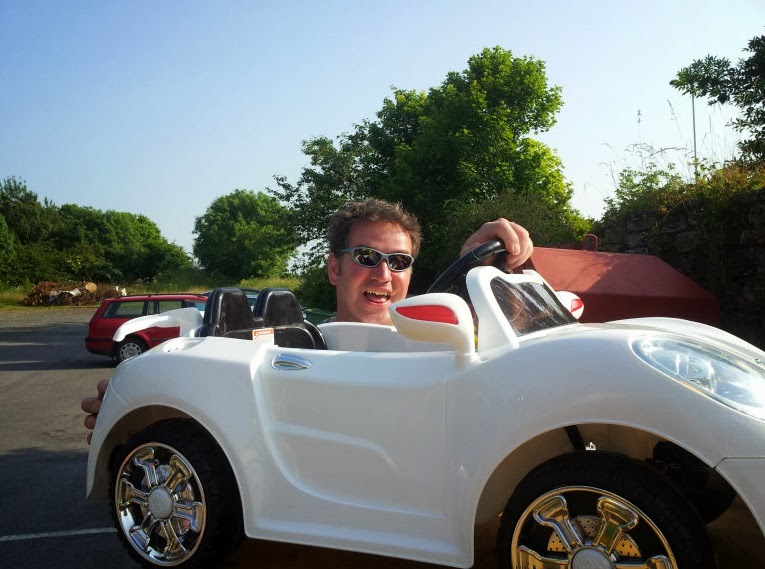 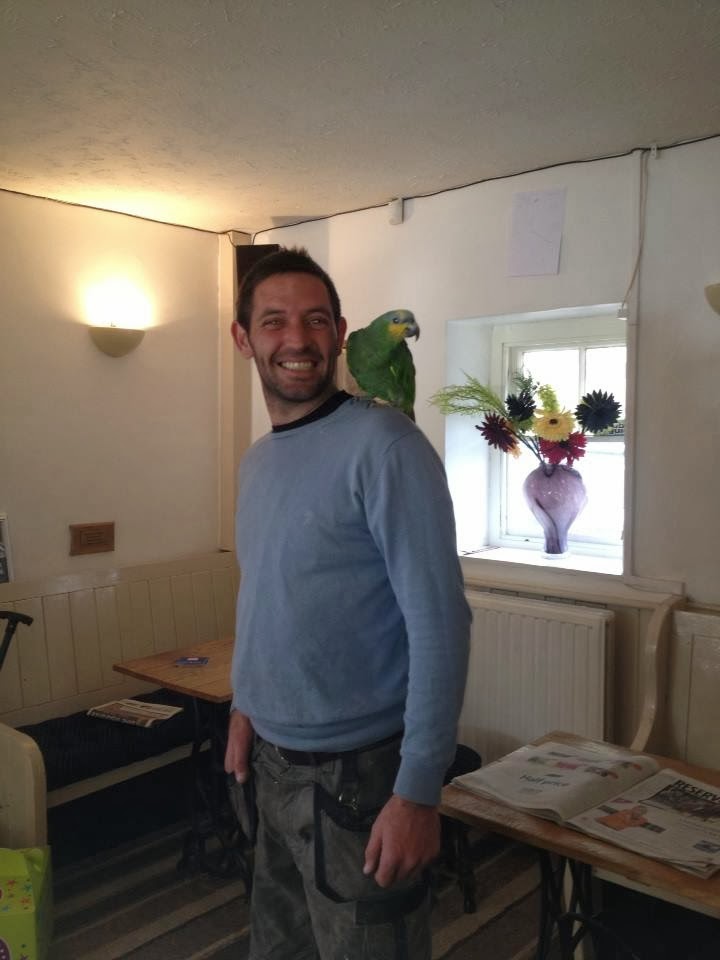 Alfie the pub parrot, relaxing on his stand after a long squawk 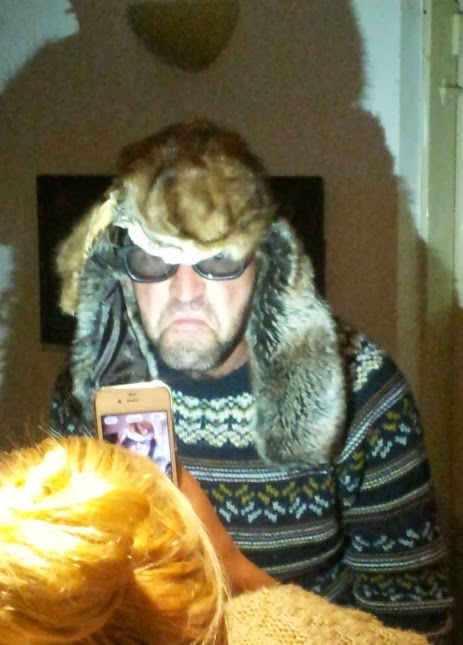 All customers welcome, no matter..... 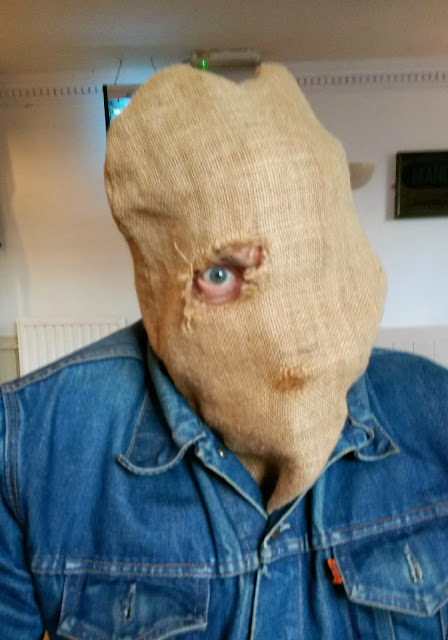 WARNING - Many subjects outlined within this site are extremely dangerous and are provided here for information only. Please don`t experiment with high voltages or chemicals unless you are fully conversant with safe laboratory practices. No liability will be accepted for death, injury or damage arising from experimentation using any information or materials supplied.
Posted by Unknown at 13:53