"The lessons of science should be experimental also. The sight of the planet through a telescope, is worth all the course on astronomy: the shock of the electric spark in the elbow, out-values all the theories; the taste of the nitrous oxide, the firing of an artificial volcano, are better than volumes of chemistry." 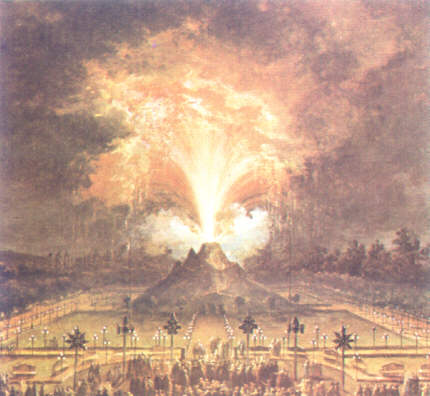 A spectacular firework display at Florence, Italy.
Painted by G M Terrini (1739-1811)
The artificial volcano appears to
be of conventional pyrotechnics


There are two types of chemical artificial volcanoes -


The seemingly innocuous artificial volcano consisting of a pile of ammonium dichromate crystals is now deemed to be hazardous. The voluminous green chromic oxide "ash" is a suspect carcinogen. The inclusion of Pharaoh`s Serpent Eggs (mercuric thiocyanate Hg(CNS)2 "pills") within the orange pile of crystals was always a bad move, and possibly explains why some chemistry teachers of yesteryear appeared as mad as hatters. 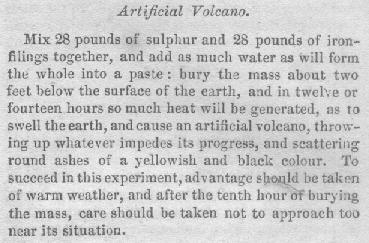 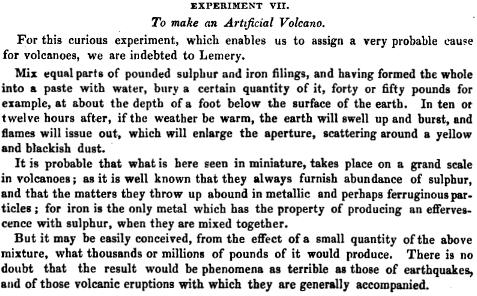 From a letter to Michael Faraday from Ernest Glitch dated June 1856.
Concerning the reaction of sulphur and iron in ton quantities

"..... Upon arrival in the south pasture, I had to agree with them. It looked like an abomination of Lucifer. A carbuncle of perhaps twenty feet had risen from the pasture. The earth itself was riven, clods of earth and grass thrown aside, a hellish red glow emanating from deep fissures. Jets of steam and sulphurous gases noisily blew from its centre. Blue flames licked around the vents of the numerous fumeroles. Red liquid sulphur spilled from within, collecting and crystallising in yellow pools at our feet. 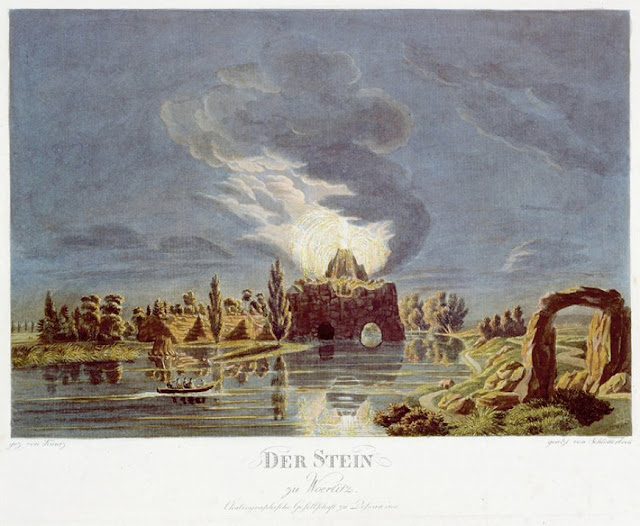 Stone Island of Woerlitz, aquatint by Wilhelm Friedrich Schlotterbeck Karl Kuntz (1797)
The Vesuvius of Wörlitz, an artificial volcano created by 18th century German prince, Leopold III Friedrich Franz. Completed in 1794, the 56 ft high edifice had a pine needle burning furnace for sparks and smoke, and a reservoir of water at the summit, which simulated lava flows when released and backlit with bengal fire.

WARNING - Many subjects outlined within this site are extremely dangerous and are provided here for information only. Please don`t experiment with high voltages or chemicals unless you are fully conversant with safe laboratory practices. No liability will be accepted for death, injury or damage arising from experimentation using any information or materials supplied.
Posted by Unknown at 10:36