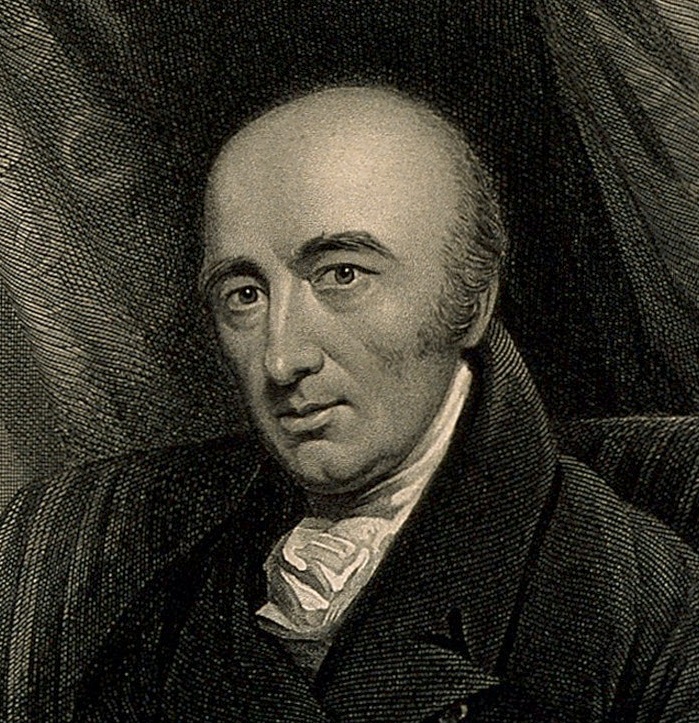 In 1801 Wollaston was getting heavily into the platinum business. He'd perfected a technique of chemical purification and consolidation of native platina, into pure malleable platinum ingots. In the next 20 years, together with his assistant John Dowse, he produced the world's best platinum by refining 47,000 ounces of native platinum, making 36,000 ounces of malleable pure metal with his chemical and powder metallurgical process. 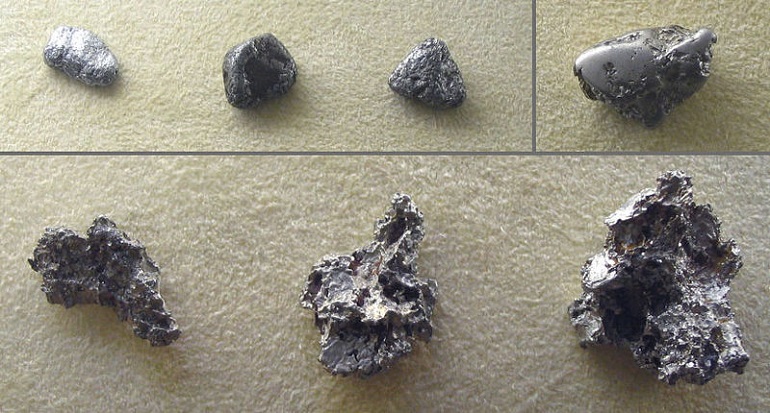 Above, nuggets of native platinum. Wollaston obtained most of his platina from Colombia, via Jamaica. This needs serious refining to produce the quality of platinum required by his customers. Platinum was in demand for laboratory equipment, for boilers in sulphuric acid manufacture, and by gunsmiths such as Manton, who patented "Platina Touch Holes." By far the most of Wollaston's sales of platinum went to quality gunsmiths. 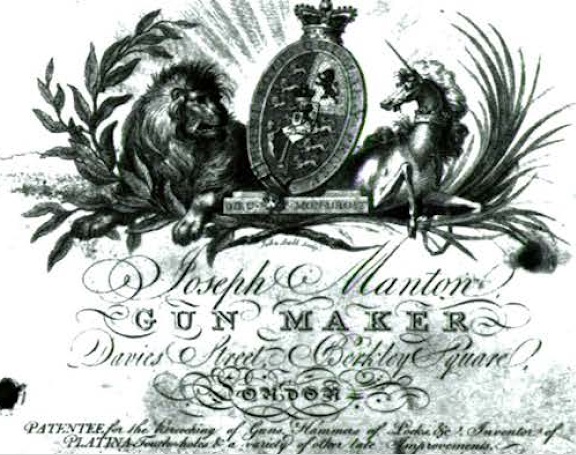 Although obviously after some serious money, Wollaston was a scientist, and very interested in the residues left over from his process. After much investigation, he discovered two new elements and named them Rhodium and Palladium. Normally a scientist would immediately publish their discoveries in one of the learned journals. However Wollaston was initially unwilling to publish. To do so would release trade secrets about his chemical extractions. He was a businessman, and incredibly elected to sell an unknown metal to the public.

The first the World knew about palladium was a single sheet flyer, sent in April 1803 anonymously to scientists in London -

Has these properties amongst others that shew it to be

1. It dissolves in pure spirit of nitre and makes a dark red solution.
2. Green vitriol throws it down in the state of a regulus from this solution as it always does gold from aqua regia.
3. If you evaporate the solution you get a red calx that dis solves in spirit of salt or other acids.
4. It is thrown down by quicksilver and by all the metals but gold platina and silver.
5. Its specific gravity by hammering was only 11.3 but by flatting as much as 11.8
6. In a common fire the face of it tarnishes a little and turns blue but comes bright again like other noble metals on being stronger heated.
7. The greatest heat of a blacksmith's fire would hardly melt it.
8. But if you touch it while hot with a small bit of sulphur it runs as easily as zinc.

It is sold only by

Mr. Forster, a mineral dealer, was Wollaston's front man to sell the new metal. Forster charged a shilling a grain (65mg) for palladium - six times the price of gold! Wollaston hoped to make a few bob, and to induce many scientists to obtain samples, to confirm the discovery of a new element.

The plan went tits-up when the whole stock was bought by a certain Richard Chenevix. An Irish chemist and mineralogist, known for his sharp cynicism and for engaging in combative criticism, Chenevix thought the new metal was a fraud.

He reckoned it was a man-made alloy of platinum and mercury. Totally wrong, but his results were printed in Proceedings of the Royal Society of London, Volume 1 - 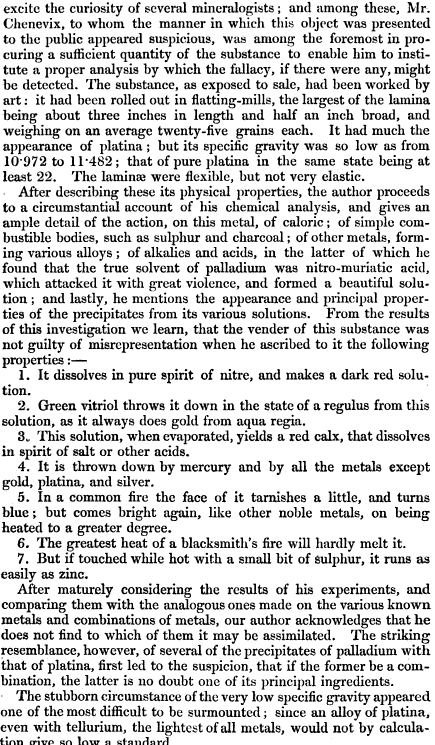 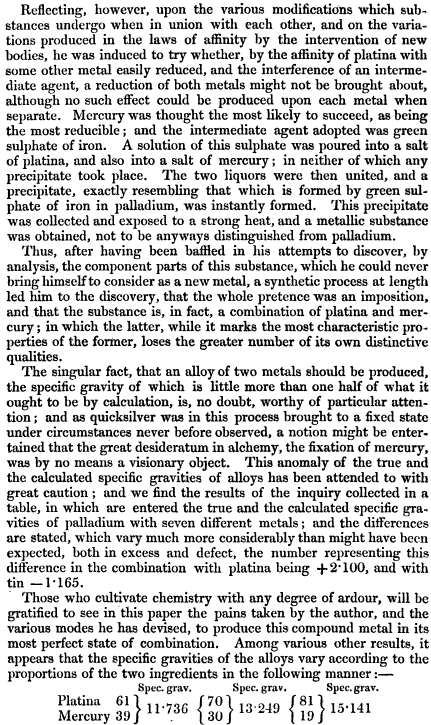 Wollaston responded to this unconventionally. Instead of publishing his work on palladium, he anonymously issued a challenge - £20 for anyone who demonstrated palladium synthesis. This from A Journal of Natural Philosophy, Chemistry and the Arts, 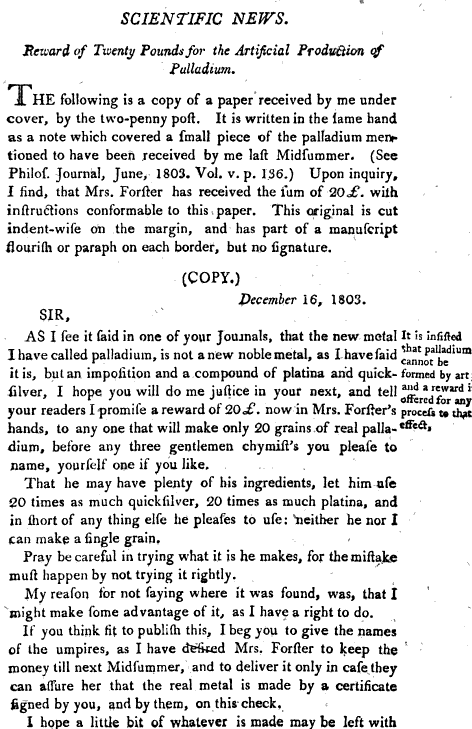 Soon many of Europe's chemists were trying to replicate the work of Chenevix, to make palladium from platinum and mercury. They were all at it, Vauquelin, W. H. Pepys, Humphry Davy, Valentin Rose, A. F. Gehlen, M. H. Klaproth, and not forgetting Professor J. B. Trommsdorff of Erfurt - 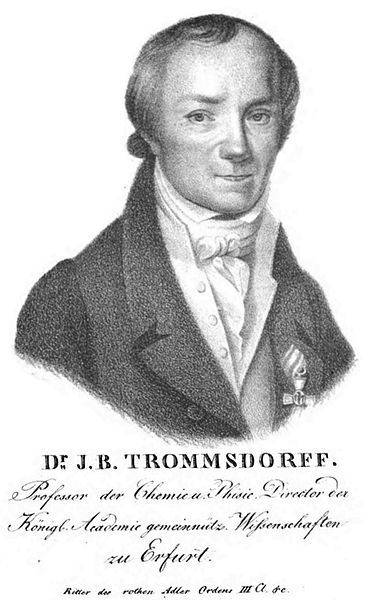 Nobody succeeded. Not even Trommers. Wollaston had privately told Sir Joseph Banks, President of the Royal Society, that he was the source of the anonymous palladium, and that it was most definitely an element. Despite Bank's knowledge that one of his publications was shit,  Chenevix was still awarded the Copley Medal in 1803 for his various Chemical Papers printed in the Philosophical Transactions. Banks was not at all pleased with the underhand way Wollaston was handling the palladium controversy.

Eventually Wollaston had to publish. This from Philosophical Transactions of the Royal Society, London. It's a 15 pager, but thankfully is followed by a nice palladium video! - 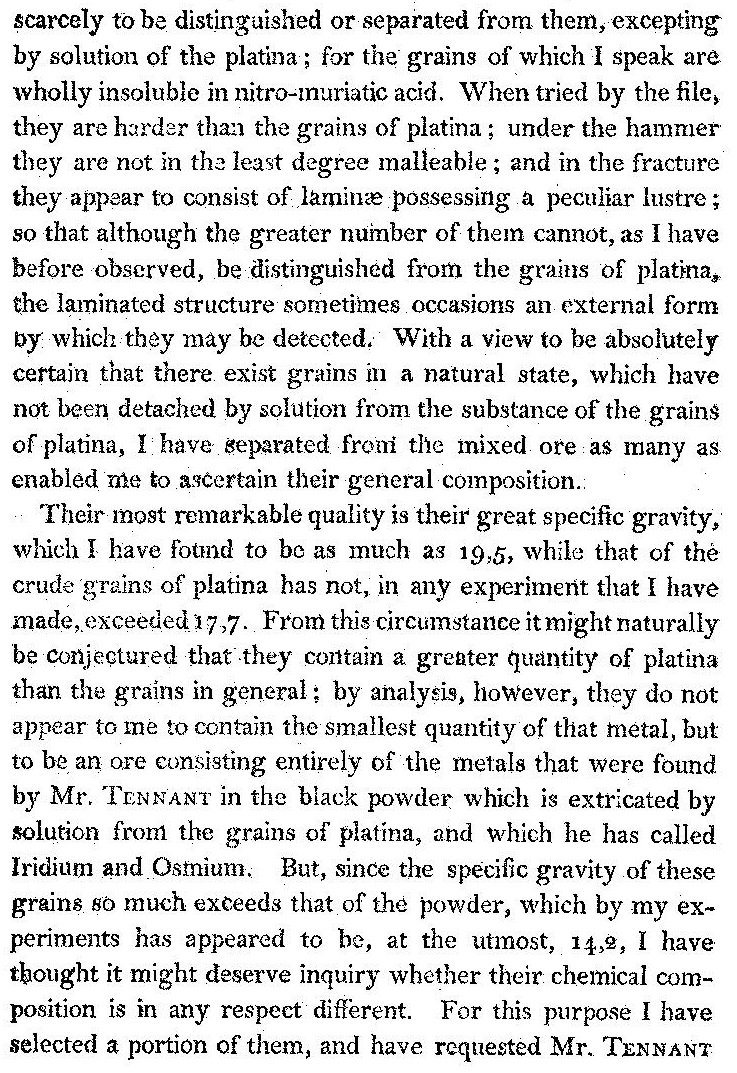 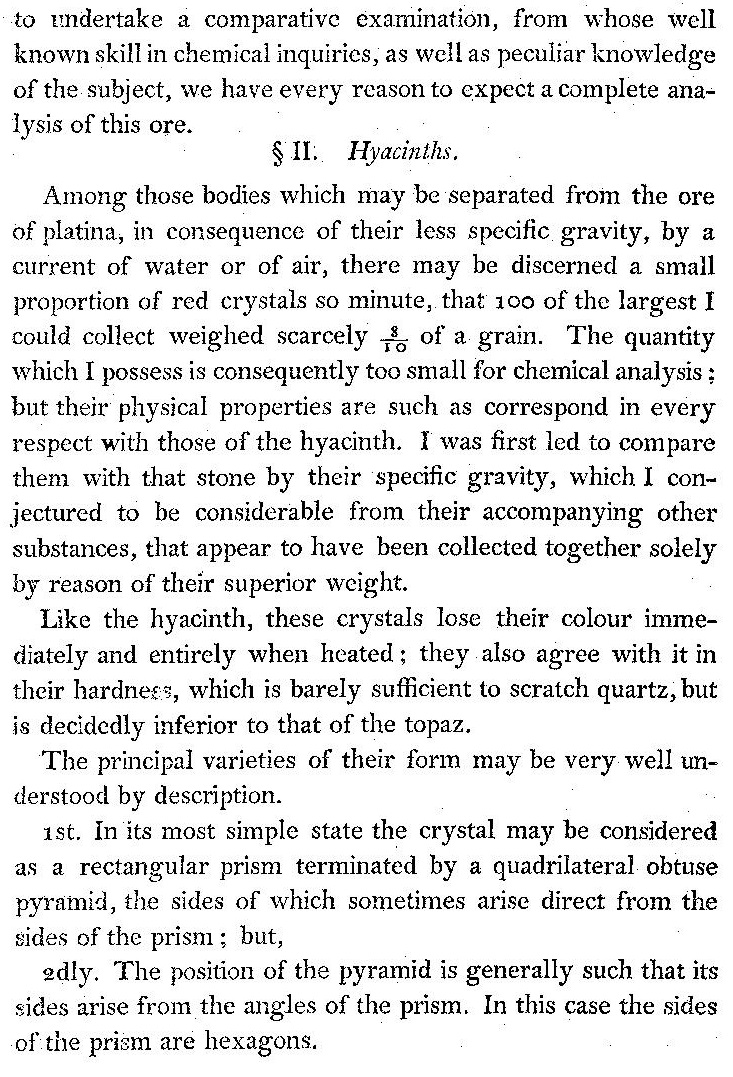 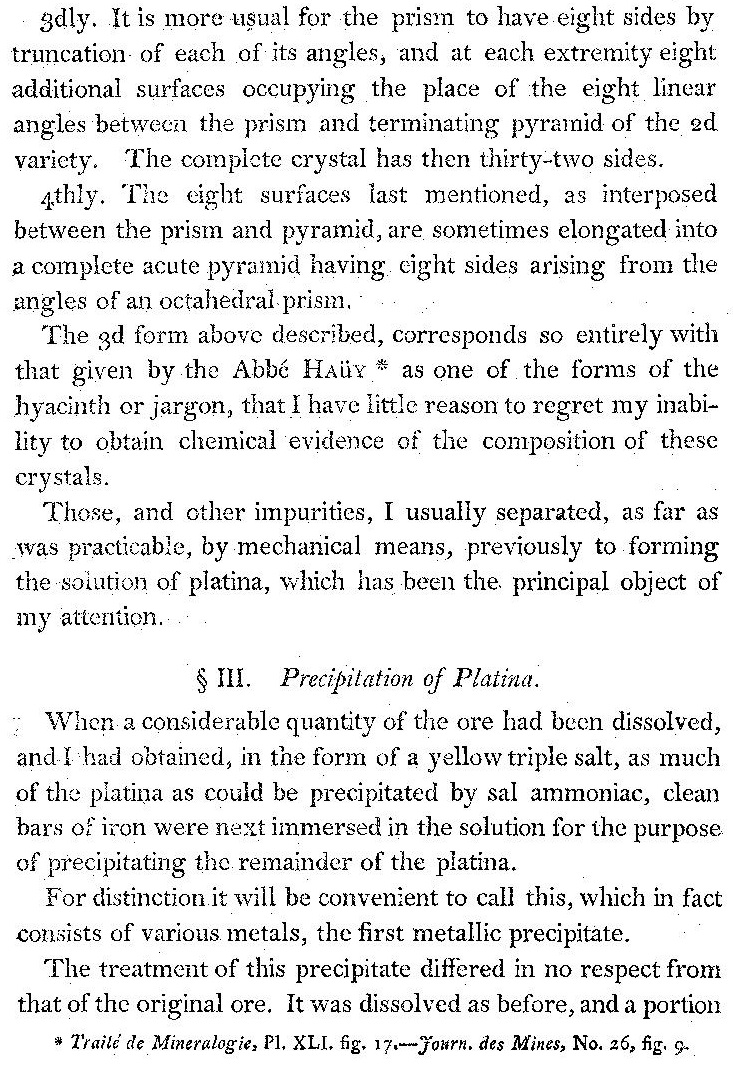 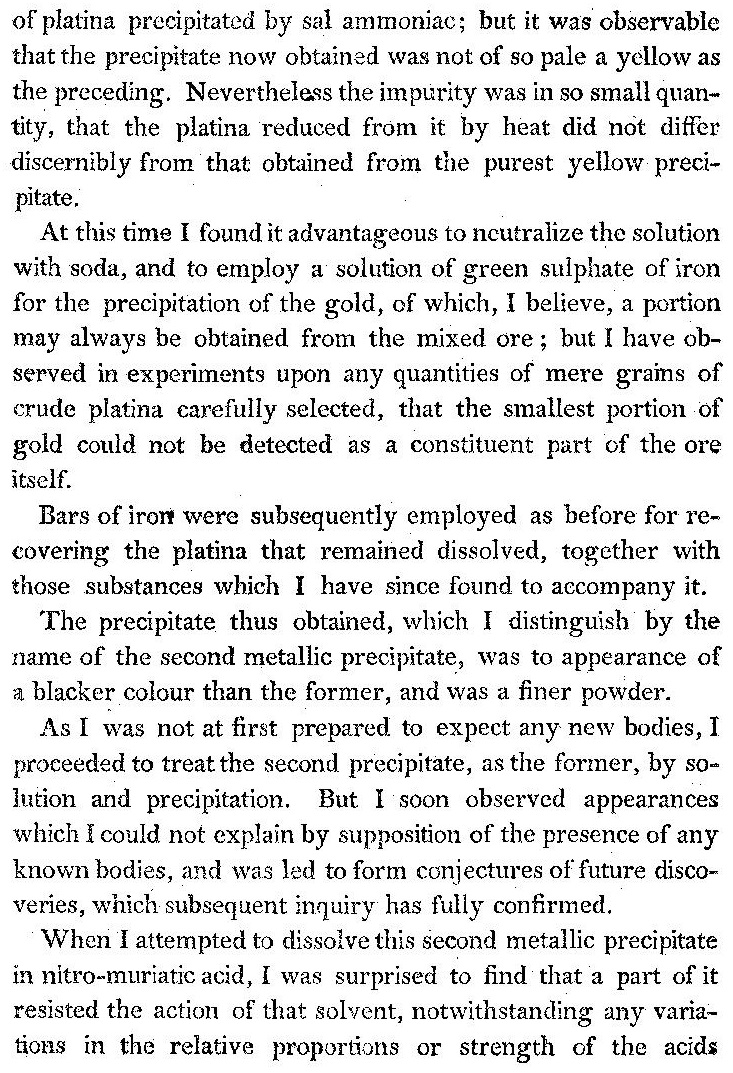 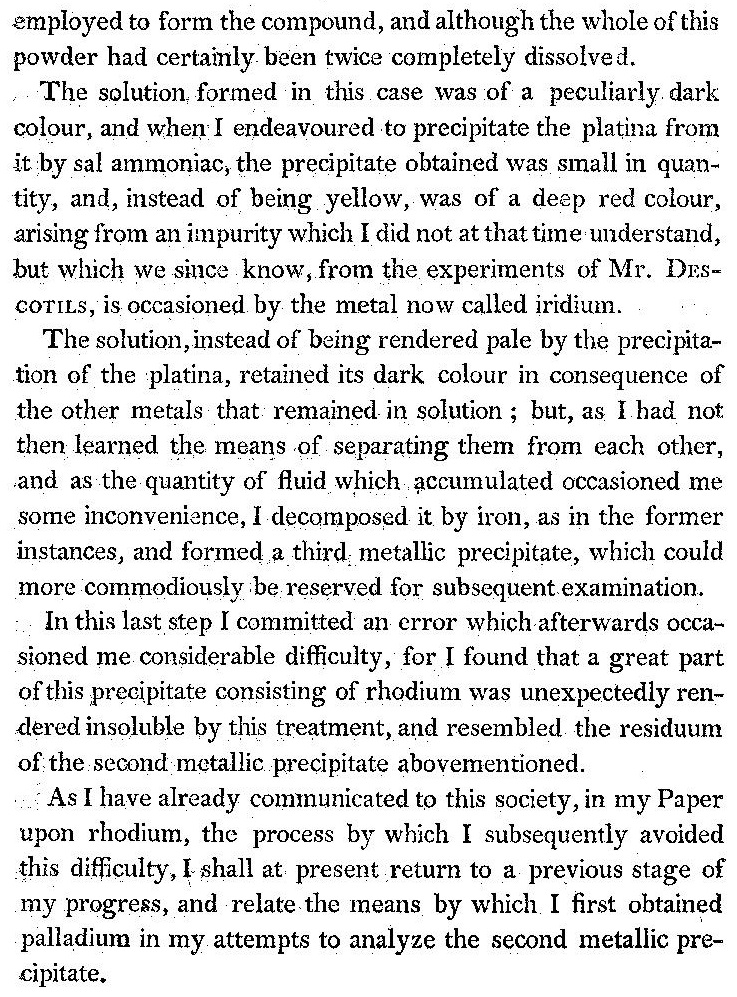 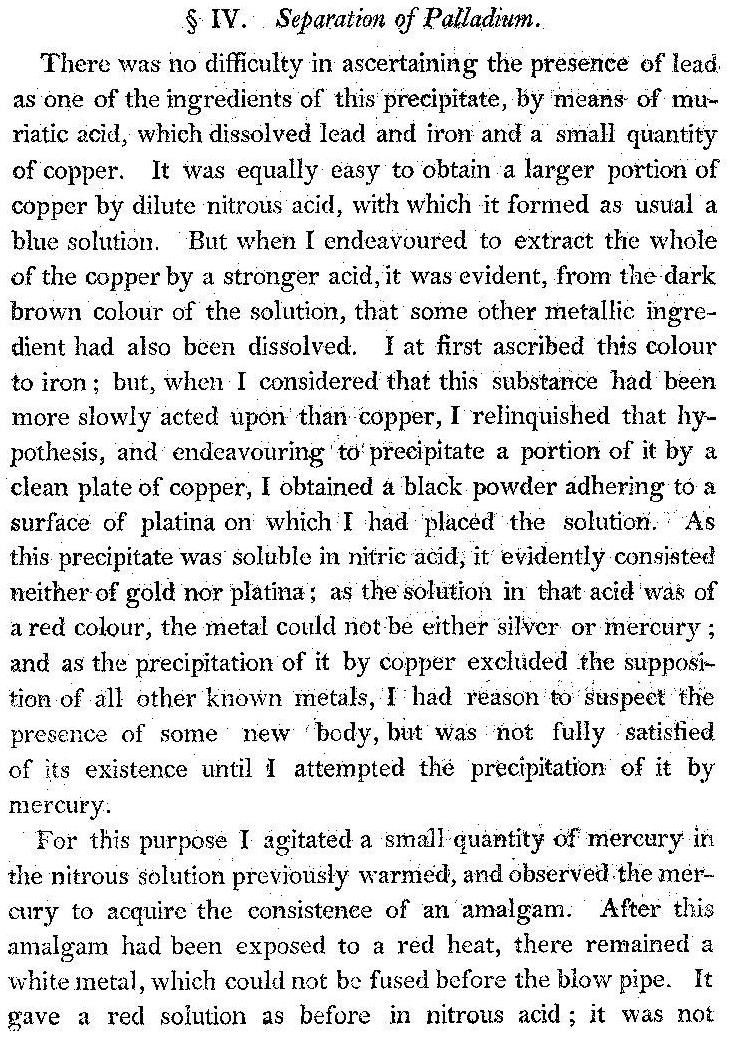 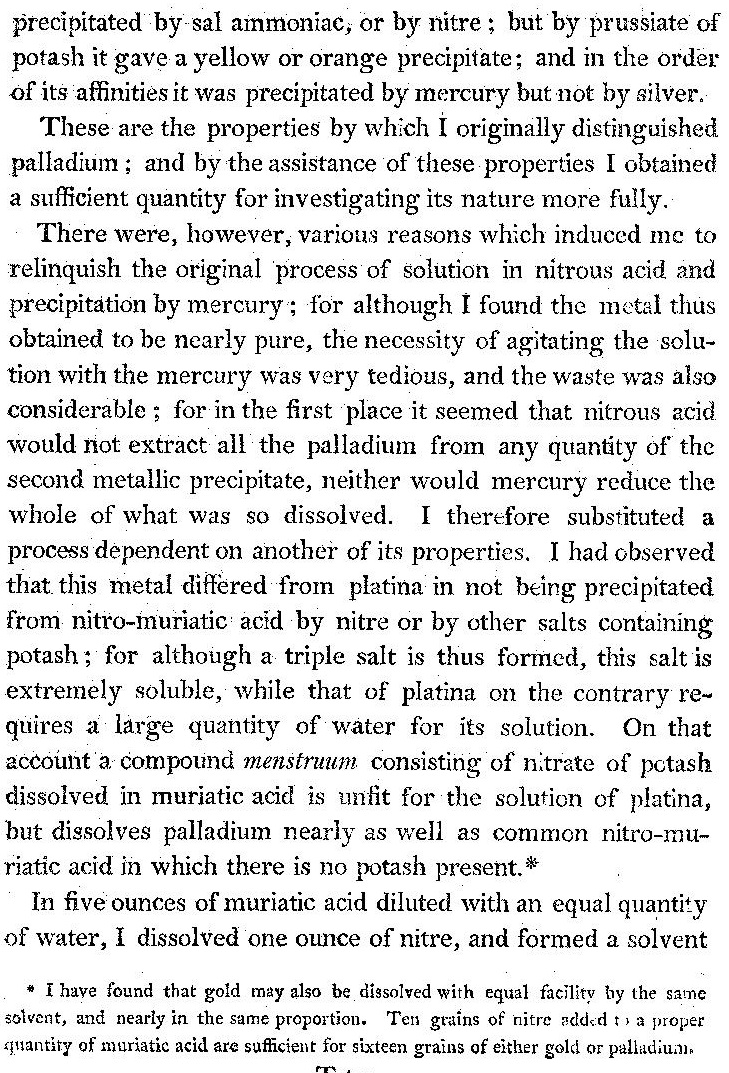 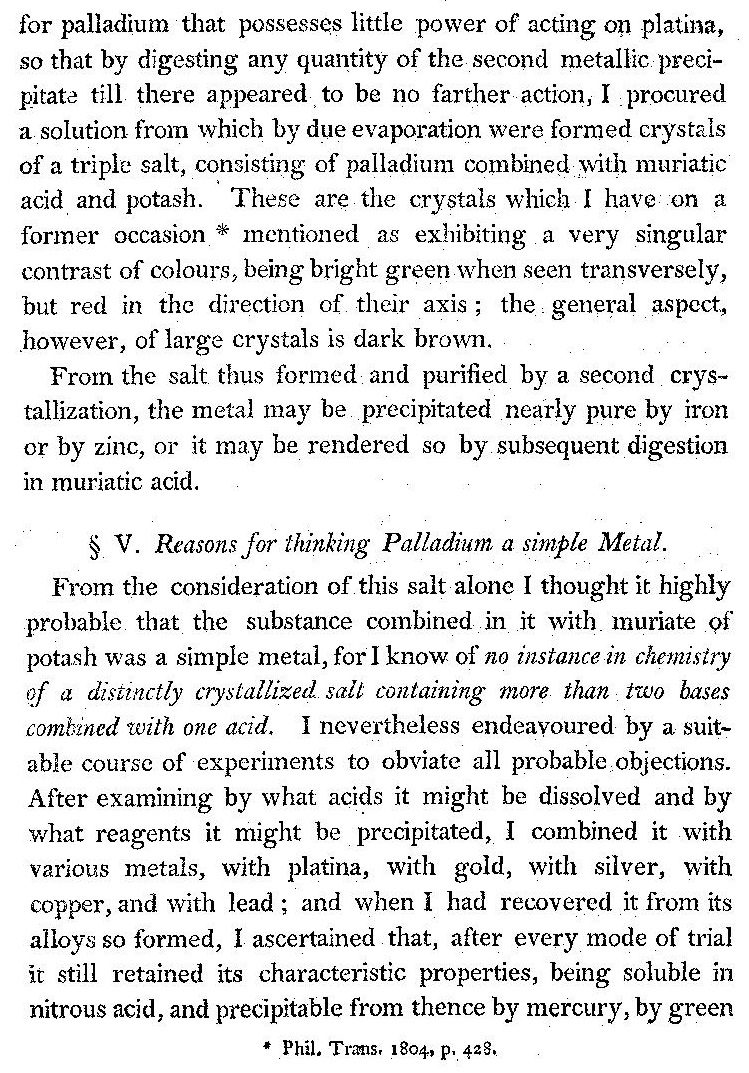 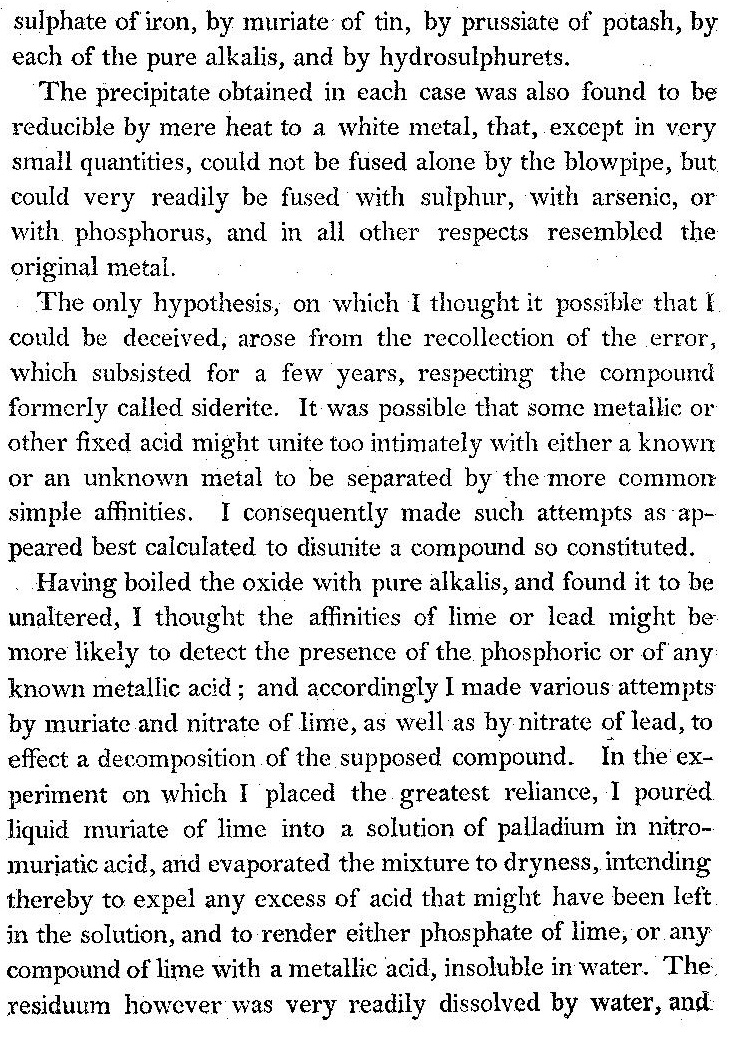 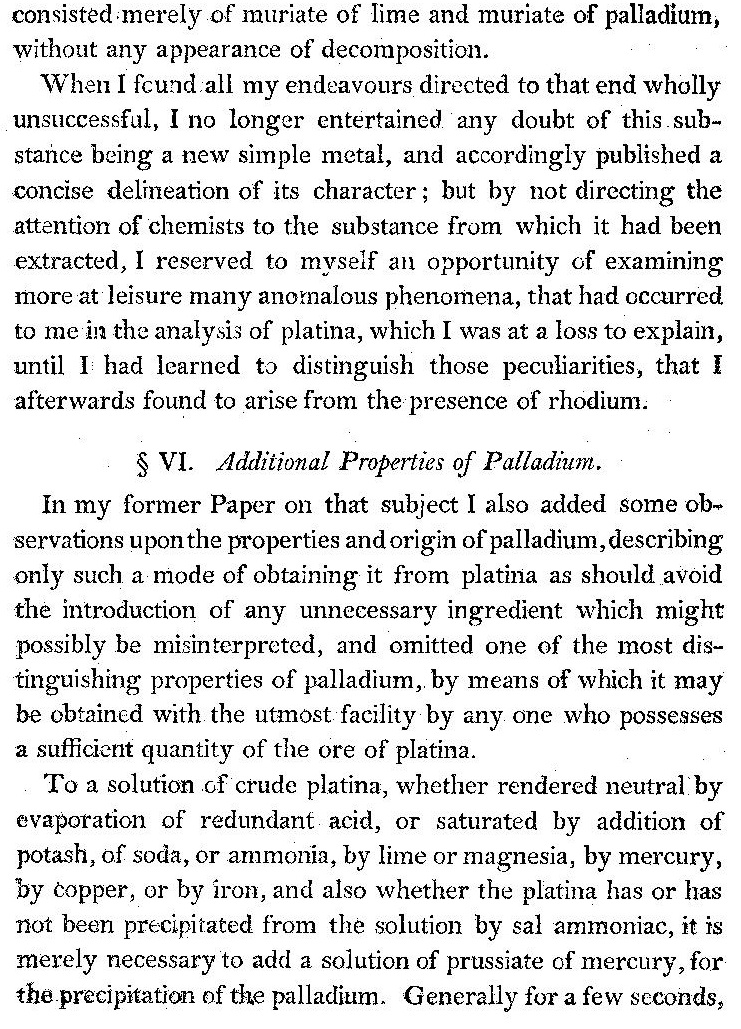 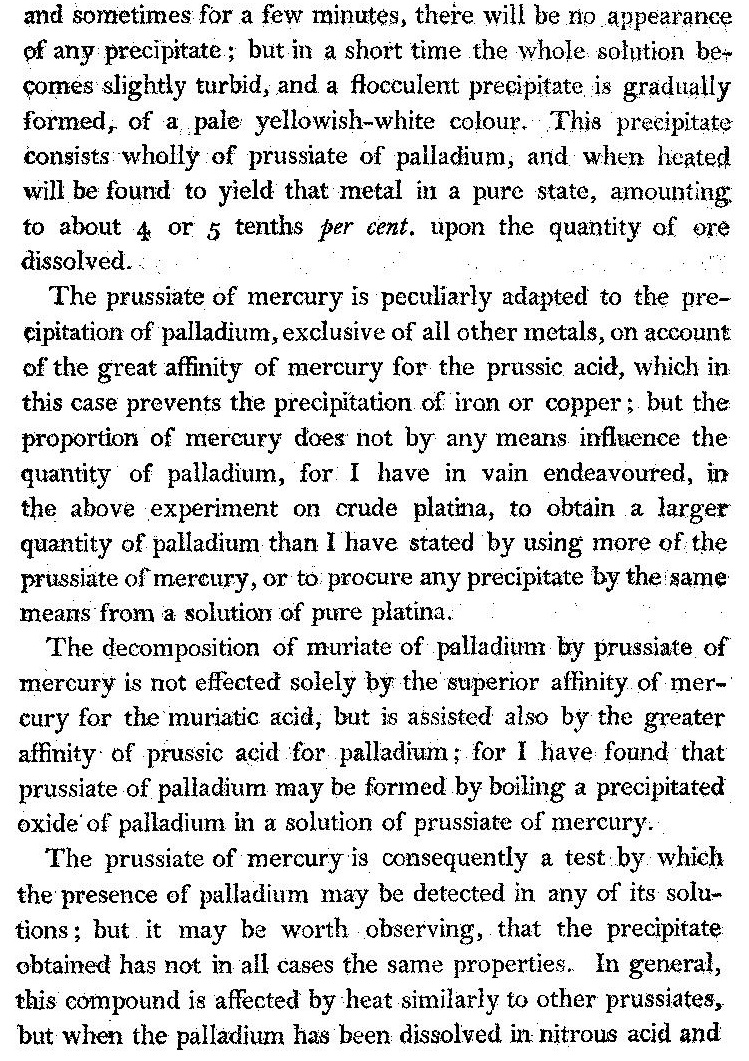 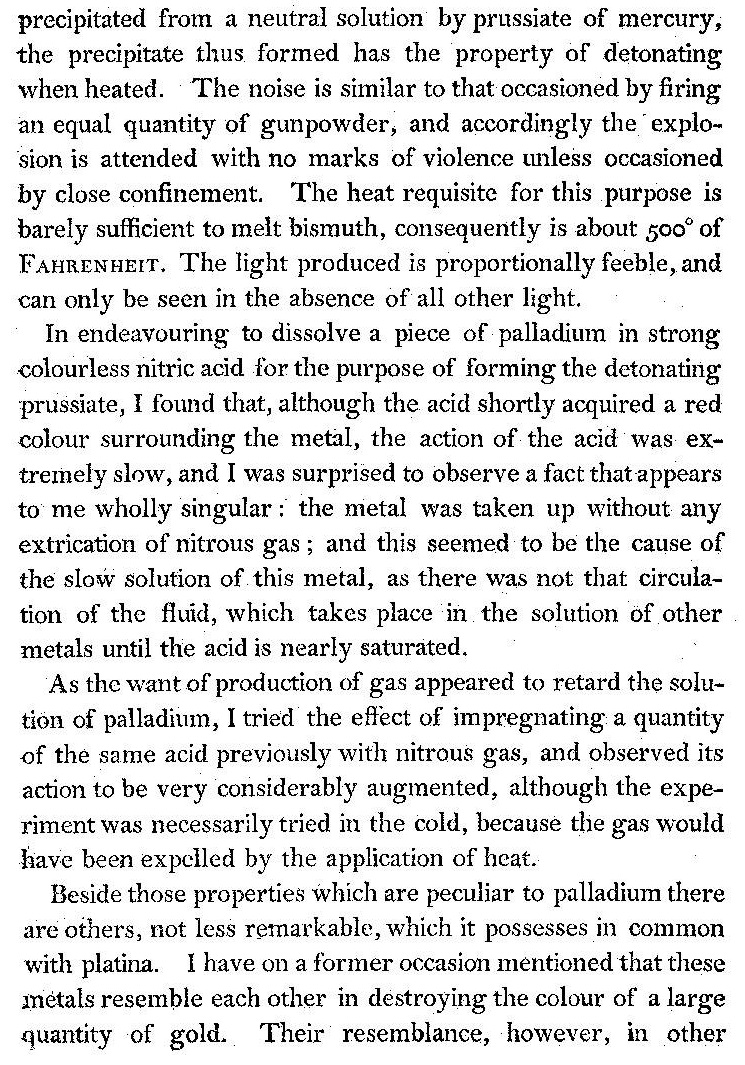 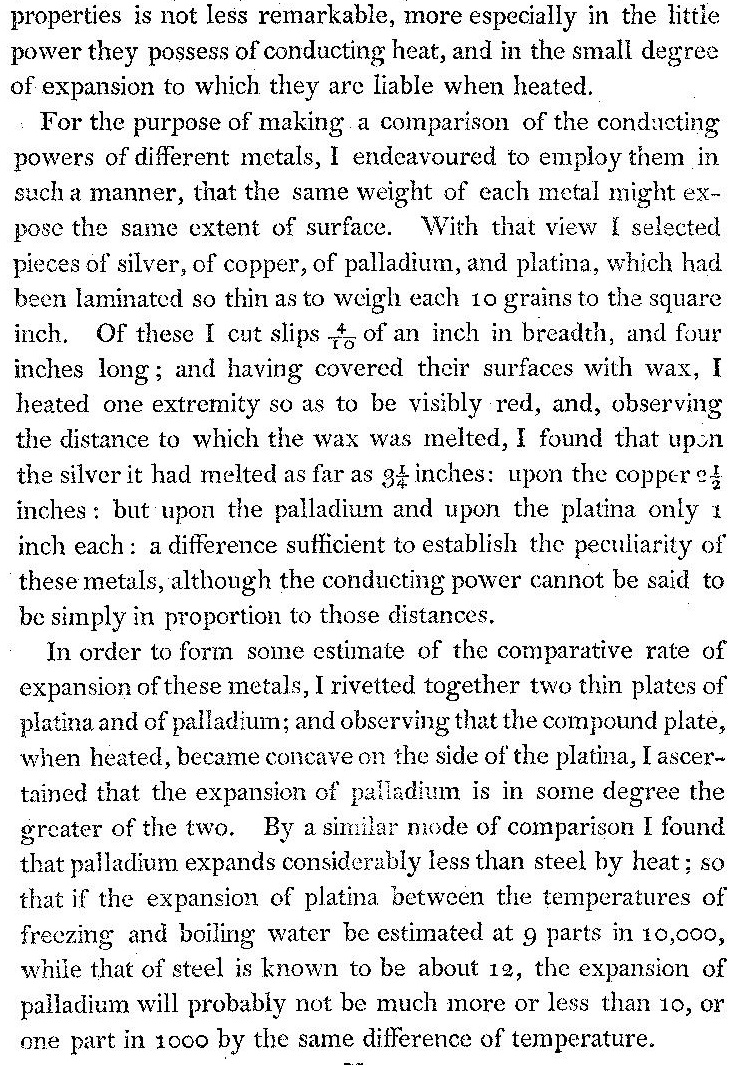 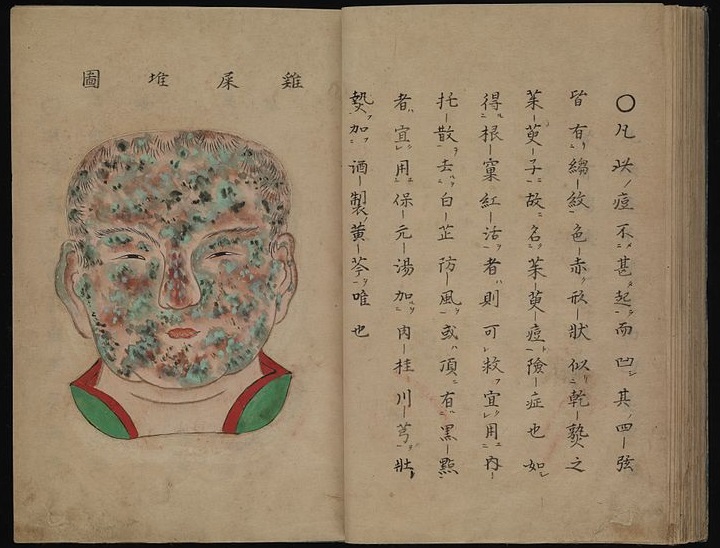 How To Spot Smallpox


WARNING - Many subjects outlined within this site are extremely dangerous and are provided here for information only. Please don`t experiment with high voltages or chemicals unless you are fully conversant with safe laboratory practices. No liability will be accepted for death, injury or damage arising from experimentation using any information or materials supplied.
Posted by Unknown at 22:51