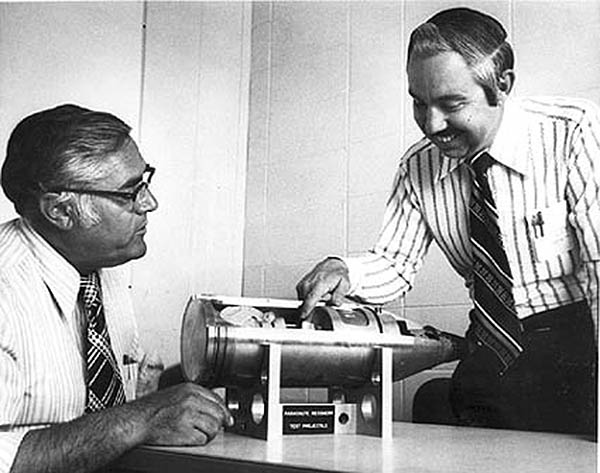 "And then this bit goes kaboom!"
"So... this little mother can freakin' fry thousands of foreigners Harry?"
"Yes Sir! It's an engineering masterpiece!"
"And we phased out these beauties in '92? Goddamn disgrace, I'll tell Trump."

The W48 was an American nuclear artillery shell, capable of being fired from any standard 155 mm (6.1 inch) howitzer, e.g. the M114, M198 or M109. It was manufactured starting in 1963, and all units were "retired" in 1992 (925 of the blighters!).
The W48 was 6.1 inches (155 mm) in diameter and 33.3 inches long. It came in two models, Mod 0 and Mod 1, which are reported to have weighed 118 and 128 pounds respectively. It had an explosive yield equivalent to 72 tons of TNT (0.072 kiloton), which is very small for a nuclear weapon.
The W48 was a small diameter linear implosion nuclear fission weapon. An implosion weapon needs less nuclear material than is required to form a critical mass at normal pressure and configurations, and uses precise explosive assemblies to collapse the material to many times normal density in order to attain critical mass.
A bare critical mass of plutonium at normal density and without additional neutron reflector material is roughly 10 kilograms (22 lb). This amount of alpha-phase plutonium (at a density of 19.8 g/cm3 (11.4 oz/cu in)) takes up 657 cm3 (40.1 in3), giving a sphere of radius 5.4 cm (2.1 in)).
To achieve a large explosive yield, a linear implosion weapon needs somewhat more material, about 13 kilograms (29 lb). The mass, known as the "pit", is configured in a lower density non-spherical configuration. Tampers or reflectors could be used to reduce the mass but the overall diameter of the fissile material plus tamper/reflector increases compared to the volume required for an untamped, unreflected pit. To fit weapons into small artillery shells (155 mm (6.1 in) or 152 mm (6.0 in) are known and 105 mm (4.1 in) has been alleged to be possible by nuclear weapon designer Ted Taylor bare pits are required.
On firing the weapon, small to moderate amounts of high explosive collapse and slightly reshape the nuclear material into a supercritical mass which then begins a chain reaction, goes critical, and explodes in a small nuclear blast. Three methods are known to compress and reshape the nuclear material: collapsing hollow spaces inside the nuclear material, using plutonium-gallium alloy which is stabilized in the low density delta phase at a density of 16.4 g/cm3 (9.5 oz/cu in) (and which collapses to denser alpha-phase under moderate explosive compression), and shaping an explosive around the nuclear material so that the explosive pressure causes a stretched-out elliptical or rugby ball shape to collapse towards a more spherical end shape, which decreases the surface area of the pit.
Linear implosion weapons have much lower efficiency due to low pressure, and require 2-3 times more nuclear material than conventional implosion weapons. They are also considerably heavier, and much smaller than conventional implosion weapons. The W54 nuclear warhead used in the Davy Crockett nuclear artillery unit was about 11 inches (28 cm) diameter and weighs 51 pounds (23 kg). The W48 is 6 inches (15 cm) in diameter and weighs over twice as much, and probably requires twice as much plutonium. Independent researchers have determined that one model of US conventional implosion fission weapon cost $1.25 million per unit produced, of which $0.25 million was the total cost for all non nuclear components and $1 million the cost of the plutonium. Linear implosion weapons requiring 2-3 times more plutonium are proportionally more expensive.

WARNING - Many subjects outlined within this site are extremely dangerous and are provided here for information only. Please don`t experiment with high voltages or chemicals unless you are fully conversant with safe laboratory practices. No liability will be accepted for death, injury or damage arising from experimentation using any information or materials supplied.
Posted by Unknown at 12:59