The days of pushing a lawnmower are history. Today we have lithium-ion battery powered robots that autonomously cut your lawn, day and night, releasing humans from the tedium of healthy exercise and fresh air. These ridiculous lumps of technology automatically plug themselves in, sucking energy from nuclear and coal power stations, whilst depriving hired gardeners of an income. Developed by Husqvarna in 1995, over a million  are now in use worldwide, providing well trimmed lawns with ragged borders, the potential of chopped-up skylark chicks and a veritable mud-bath at the charging station.

The pinnacle of this OTT mower technology is presently the Husqvarna Automower® 450X. This machine even has LED headlights, the utility of which is unknown - perhaps so that during the night the owner can tell where it's stuck? In the following video, such machines are shown being assembled, much being made of their green credentials. Nothing is mentioned of the mining, refining and shipping costs to the environment of these chemical elements -

The carbon footprint of shipping just the PCBs from China isn't referred to, nor the pollution spewed out to transport the finished units from County Durham to the rich customers worldwide. The cost of one of these inessential machines is £3,100 (Husqvarna web page here). The cost to the environment can't be accurately quantified, however, it's virtually zero if grass is cut using a human powered mower, a goat, or some rabbits!

The above video shows the production of the Husqvarna Automower®. Although the author of this document is one of the team shown working on the assembly line (at just over the minimum wage, and with minimal employment rights, being agency workers), please note that Husqvarna UK is in no way connected to, or condones, the content of this document.

A precursor to these rich man's toys was apparently constructed some 158 years ago. Powered by water, an automatic mower was used in Weardale, about 20 miles from the Husqvarna factory, at the Manor house of the eccentric Victorian inventor and industrialist Ernest Glitch. The innovations within the mower include flywheel energy storage (FES) and continuously variable transmission (CVT). Using a natural and renewable energy resource, Glitch's mower was kind to the environment, although a little dangerous to nearby humans, as can be gathered from a letter Glitch sent to Michael Faraday.

This autonomous lawnmower, invented in 1859, was a truly “green” machine. Able to power its all-mechanical operation by harnessing the very rain which enabled the grass to grow, the mower had environmental credentials modern robotic mowers sadly lack. Although dangerous in operation, the Glitch “Artificial Goat” mowed the lawn of Glitch’s manor house to “billiard table” smoothness, and the only globally sourced components were the Burmese rubies used as bearings for its flywheel energy storage system. All the raw materials for its construction were locally sourced, even down to the badger scrotum leather for its clutches.

Unfortunately the Glitch Auto-Mower had none of the attempts at safety features inherent in the products of Husqvarna. However, it was greener than modern mowers...

Those lithium-ion batteries need regular replacement, and there’s only so much cobalt being mined, an essential element used in them, something Elon Musk is getting concerned about. So they’re hardly a “mower for life”, as were the first lawnmowers produced by Edwin Budding in the 1830s, some of which are still operational! 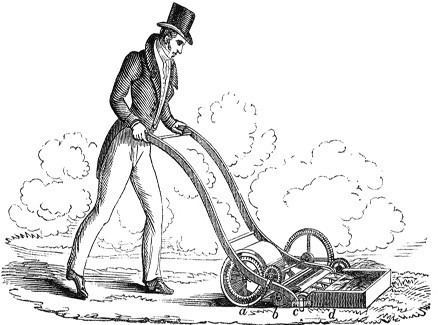 The Lancet Commission on pollution and health has just released a paper with a shocking statistic - that pollution causes 16% of all premature deaths globally. -


“Pollution is the largest environmental cause of disease and premature death in the world today. Diseases caused by pollution were responsible for an estimated 9 million premature deaths in 2015—16% of all deaths worldwide—three times more deaths than from AIDS, tuberculosis, and malaria combined and 15 times more than from all wars and other forms of violence. In the most severely affected countries, pollution-related disease is responsible for more than one death in four.”  source The Lancet, Published: 19 October 2017 (link).

With that in mind it is rather disturbing to realise that unnecessary electronic consumer toys (such as robotic mowers) are contributing to this carnage.

Components are made globally and the carbon footprint of shipping these to the assembly factory, and the pollution spewed out to transport the finished units to rich customers worldwide is not inconsiderable. It’s part of the problem outlined in the Lancet report. The cost of one of these inessential machines is high. In real terms it’s probably the same as Budding charged for one of his original human-powered mowers in Victorian times, however at least the user got some exercise for his money back then.

So what are the alternatives? Besides AstroTurf that is….

Ideas that could be investigated….

Unless a designer/inventor/hacker out there has a really lateral brainwave, the only really possible “greenish” autonomous mower design outcome is to retain a charging station (photovoltaic and/or wind) and to simplify and add longevity to the machine. However the best outcome of this exploration of mower technology (other than amusement with The Artificial Goat) is to realise that a good design of human-powered mower needs to be developed.

A “built for life” rotary (horizontally mounted blades?) push mower, perhaps using a dyson-like ball for manoeuvrability, would tick all green requirements.  Getting exercise is one of the best methods of prolonging one’s lifespan, and a ham and cheese sandwich has around ten times the energy density of a lithium-ion battery!

WARNING - Many subjects outlined within this site are extremely dangerous and are provided here for information only. Please don`t experiment with high voltages or chemicals unless you are fully conversant with safe laboratory practices. No liability will be accepted for death, injury or damage arising from experimentation using any information or materials supplied.
Posted by Unknown at 14:45