During the 1870's a commercial boom started in Britain and the USA, the manufacture of cigarettes to be sold to asthmatics. No cough-producing tobacco was used, only the best psychoactive plants, including cannabis, datura and belladonna. 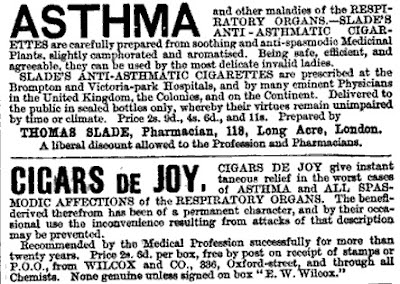 Although smoking these products undoubtedly worked, their composition was highly dangerous - 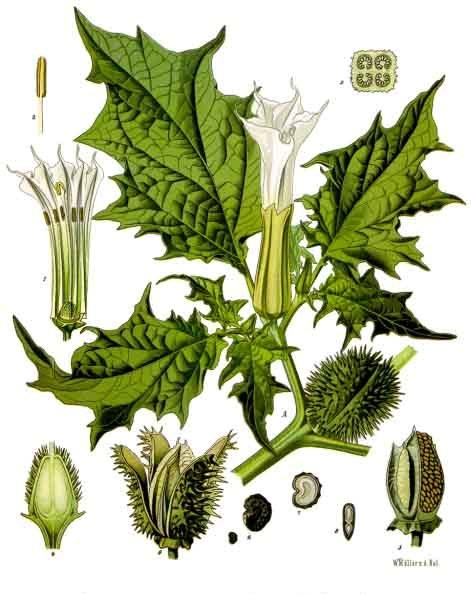 Belladonna is one of the most toxic plants found in the Eastern Hemisphere. All parts of the plant contain tropane alkaloids. Roots have up to 1.3%, leaves 1.2%, stalks 0.65%, flowers 0.6%, ripe berries 0.7%, and seeds 0.4% tropane alkaloids. Consumption of one or two fresh belladonna berries mildly affects perception in adults. Three to four fresh berries act as a psychoactive aphrodisiac, and three to ten berries are a hallucinogenic dose. The lethal dose for adults is ten to twenty berries, depending on the physiological constitution of the consumer. Consumption of two or three berries by children can be lethal.

Atropa belladonna (a.k.a. Deadly Nightshade) was used as a chemical weapon by the Scots  (during a truce!) in 1041 - 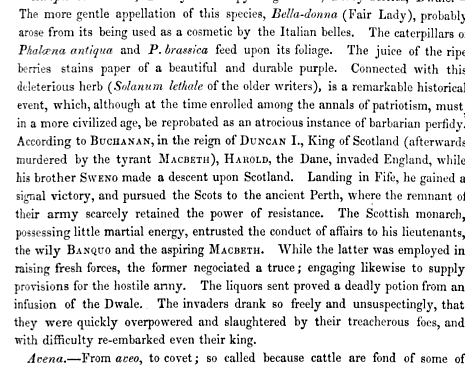 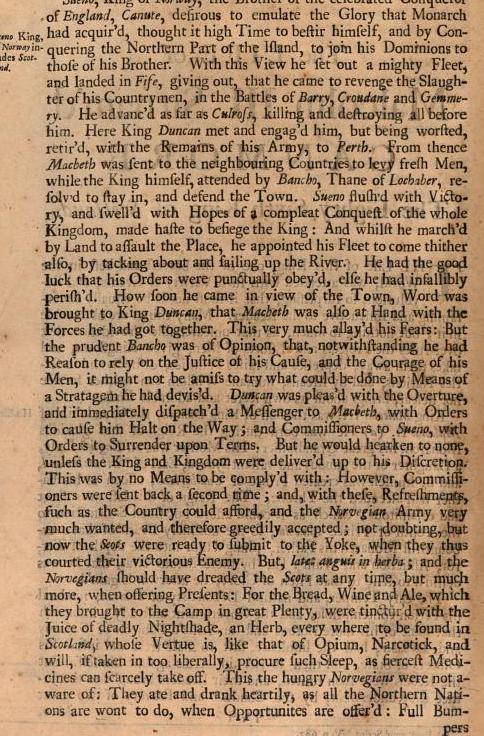 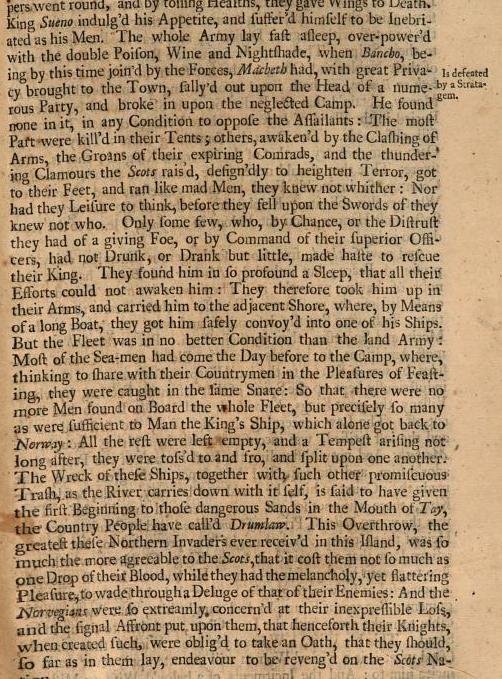 The Martial Atchievements of the Scots Nation, by Patrick Abercromby, 1711
(that is the spelling, full book here) 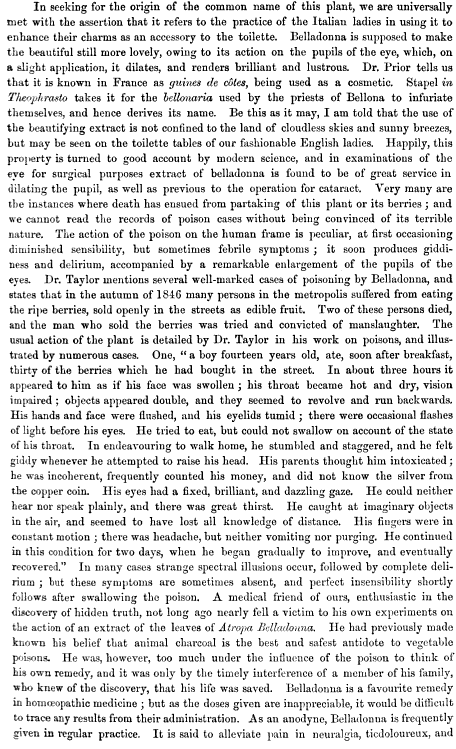 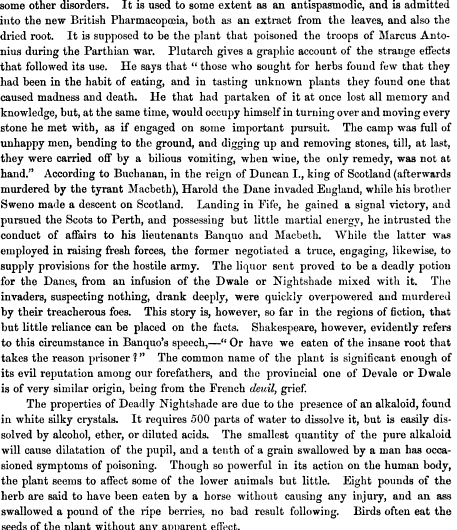 Datura stramonium (a.k.a. Jimson weed) had a rather unfortunate effect on British soldiers, who consumed it while attempting to suppress Bacon's Rebellion in 1676 -

The James-Town Weed (which resembles the Thorny Apple of Peru, and I take to be the plant so call'd) is supposed to be one of the greatest coolers in the world. This being an early plant, was gather'd very young for a boil'd salad, by some of the soldiers sent thither to quell the rebellion of Bacon (1676); and some of them ate plentifully of it, the effect of which was a very pleasant comedy, for they turned natural fools upon it for several days: one would blow up a feather in the air; another would dart straws at it with much fury; and another, stark naked, was sitting up in a corner like a monkey, grinning and making mows [grimaces] at them; a fourth would fondly kiss and paw his companions, and sneer in their faces with a countenance more antic than any in a Dutch droll.

In this frantic condition they were confined, lest they should, in their folly, destroy themselves—though it was observed that all their actions were full of innocence and good nature. Indeed, they were not very cleanly; for they would have wallowed in their own excrements, if they had not been prevented. A thousand such simple tricks they played, and after eleven days returned themselves again, not remembering anything that had passed.
The History and Present State of Virginia, Robert Beverley, 1705

Dr. Crippin, above, purchased 5 grains (0.32g) of hyoscine hydrobromide (a.k.a. scopolamine hydrobromide) in January 1910. He killed his wife with it, then dissected her body and moved another boiler in to wear her jewellery. The chemical is prepared from Datura stramonium.

The use of asthma cigarettes continued until the early 1980s, when their sale was curtailed because of recreational users who drank tea made from them, for the psychoactive effects - 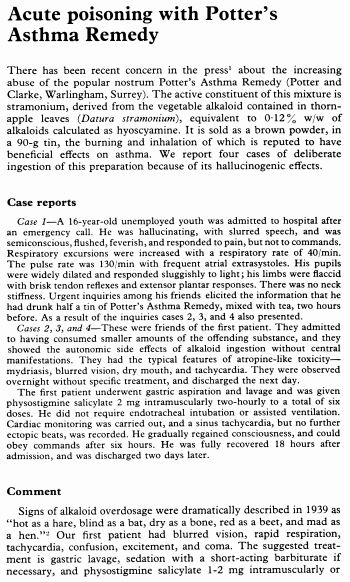 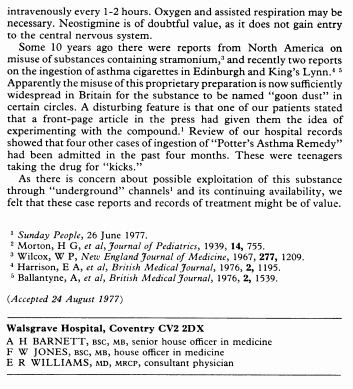 WARNING - Many subjects outlined within this site are extremely dangerous and are provided here for information only. Please don`t experiment with high voltages or chemicals unless you are fully conversant with safe laboratory practices. No liability will be accepted for death, injury or damage arising from experimentation using any information or materials supplied.
Posted by Unknown at 21:24