The 1855 Grand National Steeplechase at Aintree.

The entry of "Stan" by Ernest Glitch, a Weardale Savant, into the 1855 Grand National was always controversial. An ungelded eighteen hand Shire Cart-Horse, Stan is of some fifteen years and previously had only limited sporting experience, as a fighting-stallion at Appleby. His nature, when not enhanced by the electrical and chemical devices of his owner & trainer, is said to be quite placid. Not so last Saturday!

After considerable research, this reporter can now bring you the truth about The National this year. My own and other eye-witness accounts, from the surviving jockeys, race officials and those in the Royal Enclosure, have been collated herein, in an attempt to piece together the events of this sporting debacle & tragedy, for readers of "The Turf"

The Glitch retinue arrived on the morning of the race. A brightly painted Romany Caravan was dragged into Aintree by Stan the Cart-Horse. Ernest Glitch with his Jockey Hodges proceeded to unload racing tackle (the like of which we will hopefully never see again). I was attracted to the Glitch encampment when a commotion of sound, together with plumes of steam and smoke, signalled I was told, "...pneumatic charging of the pig-adrenaline injectors".

The giant (2,715lb) Cart Horse looked completely out of place in the paddock with the English Hunters & Arabians, and was subject of a great deal of ribaldry and genuine amusement from the steeple-chasing & turf cognoscenti. I questioned Mr. Glitch about his choice of a muscle and bone bound animal such as Stan, for the distance and height of the fences at Aintree. His answer was that muscle bulk equated to power, particularly when - and I quote - "...the flesh is enlivened with the testicular excrescences of the larger species of Proboscidea, Elephas Maximus in must, together with a belladonna, ergot & arsenic tincture applied intramuscularly, and activated by violent Leyden jar discharges." Thinking the man quite mad, I retired to the press enclosure. I wish now that I had taken seriously this Northerner.

Accounts from the Stewards at the start vary, but all agree that Stan was the last horse to assemble. When they were off, Stan was left at the line for some moments, cropping grass, until the Jockey Hodges pulled back a lever on the saddle-work he was sewn into. A description of the highly unusual seating arrangement and control tackle will now be of interest to the reader.

The jockey's position was almost like that used when racing camels, well to the rear. His legs and rump totally enclosed and sewn into a thick black crocodile-hide girdle, which was riveted to the rear saddle. In front of him, an array of plungers and levers, and a small boiler for the steam-powered frictional electric generator. A large bank of Leyden Jars lay in double rows up the horse's back to it's neck. Pipes led from cylinders and bottles to various intravenous metal tubular needles inserted into the beast. Copper wires led from spherical brass electrical terminations and connected to Stan`s procreational equipment.

The Starter, Mr. Edgecombe Esq., is still traumatised by events but kindly recounted the moments after the start to this reporter from his sick-bed, "I saw the Jockey pull on a lever, then the horse trembled, it's eyes bulged and it fixed me with it's suddenly demonic stare!" At this point Mr. Edgecombe became unintelligible, but other accounts tell of the Shire Horse suddenly attaining a fearsome enlargement of it's member, and mounting the starting box. Frantically working levers and valves whilst sewn onto the Amorous Horse, the Jockey Hodges got the beast down off the Starter, applied a Leyden discharge to it's right gonad to turn the animal towards the race ahead, and pushed forward a blue plunger. The beast leapt into pursuit like, and I quote, "....a greyhound with a ferret up it's arse."

The mountain of galloping horse-flesh that was Stan took over a complete circuit of the Aintree course to close the gap. The progress of the animal was of an angular nature, slight changes of direction being accomplished by the Jockey Hodges using the application of lateral testicular electrical shocks. Once Stan caught the tail-enders the Jockey turned the valves of the pneumatic injectors to full-on. Three gills of wild-boar adrenaline pulsed into Stan's bloodstream.
Stan veritably charged past all the thoroughbreds.

Unfortunately the huge amount of elephantine testosterone coursing through the horse caused an aggressive about turn at Bechers Brook. Stan refused the fence and faced the oncoming race. The owner, Mr. Glitch, had chemically cauterised Stan's nasal membranes with hydrogen chloride gas. Unable, therefore, to smell the difference between the mares and colts, or indeed between elephants and colts, the Cart-Horse Stan attacked the whole of the approaching pack of Race-Horses.

Chaos ensued, with the sad death of the beautiful chestnut "Blighty", with "Ambassadore" left lame and "Horatio" badly bitten. Three jockeys died. Throughout this appalling demonstration of Horse-Fighting, the Jockey Hodges was seen to be battling to control the Shire. He was even seen to withdraw a pipe and needle from Stan's femoral artery and plunge it into his own neck, furiously working the belladonna and elephant testosterone pumps to chemically enhance his chance of controlling his mount.

Thirty horses pulled up in terror at Bechers. But Wanderer, at 25 to 1, had sneaked past the carnage, and was well on his way to victory, when the Jockey Hodges noticed. Even while Stan was savaging a fine three-year Arabian gelding, the jockey was seen to stoke the saddle-boiler and a cloud of steam indicated that the electrical generator was charging the Leydens. With a loud detonation, the jars discharged into Stan's reproductive organs. With blood and shreds of equine flesh spraying from his mouth and hooves, Stan spun round and, with an incredibly short run up, leapt over Bechers.

The fighting had obviously winded Stan, as it was not until the 30th, and last fence, that the animals raced neck to neck. Wanderer was tiring, and it could be seen that Stan was trying to bite the face off Wanderer's Jockey. The last furlong looked to be easy for Stan, although alarming amounts of bloody foam was erupting from the mouth, both of Horse and Jockey. Suddenly Stan noticed the Royal Enclosure and veered off the course, barging through fences and scattering commoners. Stan charged directly for Her Royal Highness, his member hugely....       -- continued on page five -- 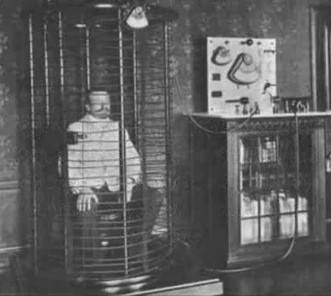 WARNING - Many subjects outlined within this site are extremely dangerous and are provided here for information only. Please don`t experiment with high voltages or chemicals unless you are fully conversant with safe laboratory practices. No liability will be accepted for death, injury or damage arising from experimentation using any information or materials supplied.
Posted by Unknown at 15:58