Mascart Electrometer, with Photographic Register, July, 1892.
Blue Hill Meteorological Observatory.
insulated, and the kite high in air, the observer closely watching the index of the electrometer could tell positively, and as quickly as one outside watching the kite, whether it rose or fell. When the kite rose, up went the voltage, and vice versa. In other words, the electric potential of the air increased with elevation. It must be confessed that the kites made to-day would have behaved better and flown with more steadiness than the one we used. It may have been the varying wind, or more likely wrong proportions in the kite and tail; but our old hexagonal kite would dive even when high in air. Once we kept the kite aloft from the forenoon until late at night, but that was something unusual.
Passing now over six years in which we had been busy measuring the electrification of the air under all conditions, and discovering, for example, that a snowstorm was almost identical with a thunderstorm in its tremendous electrical changes, we come to the year 1891, when we again flew kites for the purpose of electrically exploring the air. Our experiments at the top of the Washington Monument in 1885 and 1886 (especially those during severe thunderstorms, when we obtained potentials as high as three and four thousand volts just before the lightning),

Multiple Quadrant Electrometer, July, 1892. Blue Hill Observatory.
had given us an insight into the strains and stresses in the air, and taught us what to expect at such times. There was still little improvement in the kite, but much better electrical apparatus was at hand. It may seem ridiculous, but we hauled nearly a wagon-load of electrical apparatus to the summit of the hill, and found occasion to use all of it. Our insulators were delicate glass vessels, curiously shaped, containing sulphuric acid, and 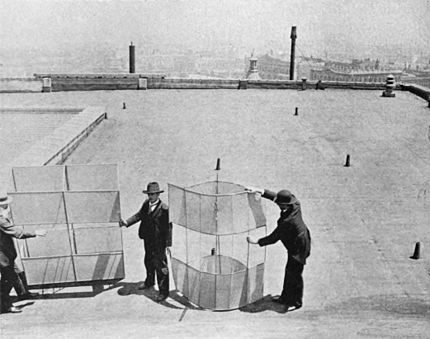 Kite-Flying on Roof of City Building.
able to hold with little leakage the highest known potentials. Besides these fine Mascart insulators, we had hundreds of dis tilled-water batteries and two electrometers, one a Mascart quadrant, the other a large multiple quadrant. The chief aim that year was to secure by mechanical means (discarding the photographic and eye methods) a continuous record of the potential. When we can study the potential at any moment and still have a record of it, the relation of the electricity of the air to the pressure, temperature, and moisture will be more easily investigated. Among our records that year there is one date, June 30, 1891, where a direct comparison of the electrification of the air fifteen or twenty feet from the ground and at a height of about five hundred feet is shown. In one, the potential was obtained by a water-dropper collector from a second-story window in the observatory, and in the other was obtained by means of the kite. It will be seen how much higher the kite values are, although the kite was a much slower accumulator of electricity. In the next year, 1892, the kite was flown several times during thunderstorms, but generally during afternoon storms; and in the lull preceding the wind rush the kite would fall. It was not until August 9th that we succeeded in going through a storm with the kite still flying. About 11 a. m. the kite was sent aloft, and it remained aloft until after 10 p. m. From the observatory one can see to the west fifty or more miles, and a thunderstorm came into view just about sunset. The kite was flying steadily, and whenever a finger was held near the kite wire there was a perfect fusillade of sparks. As the darkness increased, the polished metallic and glass surfaces in the large electrometer reflected the sparks, now strong enough to jump across the air gaps, and the incessant sizzling threatened to burn out the instrument. The vividness of the lightning in the west also made it plain that the storm was one of great violence, and as the observatory itself would be jeopardized, one of the four men present proposed to cut the wired string and let the kite go.
But even that was easier said than done, for to touch the string was to receive a severe shock. It was necessary, however, to get out of the scrape, and one of the party took the kite string and broke the connection with the electrometer and insulators. While he was in the act of doing this, the others, who by this time were outside the building, saw a flash of lightning to the west of the hill. The observer who was undoing the kite wire did not see this flash. He saw a brilliant flare-up in the electrometer, and at the same instant felt a severe blow across both arms. Notwithstanding, he loosened the wire, and, dropping an end without, it took but a few moments to make it fast on the hillside some distance away from the observatory. There it remained for the rest of the night. A 105-volt incandescent lamp was placed between the end of the kite wire and a wire running to the ground. There was some light, but no incandescence of the filament. It was more in the nature of a creeping of the charge over the outer glass surface of the lamp. Stinging sparks were felt whenever the kite wire was touched. The storm gradually passed over, the lightning being vivid and frequent in the west and north, and, as we learned next day, doing considerable damage. The nearest flash to the hill, however, as well as we could determine by the interval between thunder and flash,

Hargrave Kite in Air. Same kite as in preceding cut.
was forty-five hundred feet away, so that the discharge which the observer felt while loosening the wire must have been a sympathetic one. We obtained a photograph of the prime discharge, and very curiously this shows a remarkable change of direction.
This year, in some interesting experiments made on the roof of the Mills Building at San Francisco, it was noticed that the roof, which has a covering of bitumen, was a good insulator. Ordinarily one may touch the reel on which the kite wire is wound without being shocked, but if a wire be connected with the ventilating pipes running to the ground there are small sparks. Introducing a condenser in the circuit, the intensity of the spark is increased. It only remains to construct an appropriate coil of the kite wire and place within it another independent coil. In the outer coil a quick circuit breaker may be placed, and theoretically at least we shall transform down the high potential and low amperage charge of the air to a current of less potential and greater amperage. This can be put to work and the long-delayed realization of Franklin's plan of harnessing the electricity of the air be consummated. It may not be a profitable investment from the commercial standpoint, but no one can say what this tapping of the aërial reservoir may lead to. Determining the nature and origin of the aurora will be as great a scientific achievement as utilizing the energy of Niagara Falls.
Popular Science Monthly Volume 51 October 1897