A couple of fulgurite articles from the 1880s 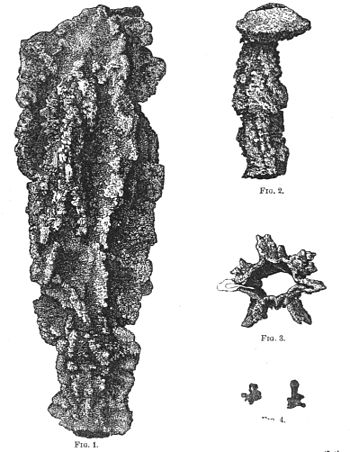 Fulgurite Tubes (natural size). (Reproduced from Proceedings of the United States National Museum, vol. ix, 1886.) Fig. 1, portion of tube, common form; Fig. 2, tube with bulb-like enlargement; Fig. 3, cross-section of tube, characteristic form; Fig. 4, holes fused by lightning in sheet-copper, and resembling fulgurite tubes in outline.
One of these was traced into the sand for a distance of about seven feet, and was found to increase in size slightly from above downward. They were frequently branched, and often sent out small, nearly flat horizontal branches or shoots, about one quarter of an inch wide, and half as thick, the greater diameter being horizontal. The hole in these was quite small, and closed abruptly at the end. Fig.2 is peculiarly striking, and seems quite different in form from any yet described. These "bulbs" are said to correspond with the stratification in the sand.
Concerning the microscopic and chemical properties of the fulgurite, little seems to have been done until within a comparatively recent period. In 1875, Harting[12] examined some fulgurites found in acorn-field at Elspeet. He describes these as vitrified tubes, having a form scoriaceous, rough, and very irregular. Exteriorly they were coated with sand and carbonaceous particles, while interiorly they were of a white glass which was sometimes streaked with brown or black, a coloration which he judges to be due to distillation products from the vegetable matter in the sand. A complete chemical analysis of the fulgurite yielded results as follows: SiO2, 90,2 per cent; Al2O3, 0,9 per cent; Fe2O3, 0,7 per cent; CaO, 0,1 per cent; MgO, 0,5 per cent; K2O, 0,5 per cent; NaO, 0,6 per cent; insoluble in HCl, 0,9 per cent; carbonaceous matter, 5,6 per cent.
Discussing the results, the author argues that the alkalies and other bases, belonging to the vegetable matter, have been driven off by the heat of the flash, since the percentages shown are not greater than is contained by the sand itself. He also conceives that the presence of these bases may have aided in the reduction of the refractory silica—an idea which seems to have also been adopted by Gümbel and Wichmann. When, however, we consider the extraordinary brief duration of the flash and heat, this reaction seems scarcely possible.
Gümbel[13] describes fulgurites from the Libyan Desert between Dachel and the Ammon Oasis, in which the tube-wall consists of an amorphous glass enveloping un fused quartz-kernels. A partial chemical analysis led him to conclude the interior lining to be a true quartz glass. To this conclusion Wichmann[14] takes exceptions. This gentleman pulverized portions of the fulgurite tubes from Senner Heide, from Elspeet, and from Starczynow, and by means of a solution of great density[15] succeeded in separating the glass of the fulgurite from the inclosed sand. Chemical analysis of this yielded silica as follows:
Thus proving that the glass was not a pure quartz glass. Owing to the small amount of material at his disposal, the other constituents could not be determined.

By STANISLAUS MEUNIER.
THE effects of lightning on the tops of mountains are often very intense. Among them have been cited such works as the transportation of large masses to a considerable distance. They also frequently include the development of high degrees of heat. The clearest possible proof of this fact is afforded by the superficial fusion of rocks, even of such refractory ones as granite and other crystalline stones. Laussure long ago described vitrifications of this kind on the summit of Mont Blanc; Ramond has found them on the Pic-du-Midi, and Humboldt in Mexico; and the characters they exhibit are everywhere uniform.
The vitrifications are generally only a few tenths of a millimetre thick, but they sometimes extend over surfaces of nearly a square metre, on which the rock appears to be veneered with a kind of gray or yellowish enamel, in which bubbles or swellings several millimetres in diameter may be distinguished. The specimen represented in Fig. 1, which is exhibited in the geological department of the museum at

Fig. 1.—Block of Diorite from the Pic-du-Midi, showing on its Surface a Melted and Vitrified Track produced by the Passage of Lightning. (From a specimen in the Museum; figure one fourth the natural size.)
Paris, was found on the top of the Pic-du-Midi by MM. Baylac and Albert Tissandier. It is of special interest. The rock is of a granitoid diorite, that is, a mixture of triclinic feldspar and hornblende amphibole. The melted portion does not constitute a veneer, as in the examples previously mentioned; it is a track exactly marking the course of the electric spark and ramifying as it did. The vitrified portion extends along the natural external surface of the rock, and then plunges into a fissure, within which it disappears. In this respect the fulguration is extremely like another accident which is known under the name of fulgurites or fulminated tubes, splendid specimens of which may be seen at the museum. As the two cuts in Fig. 2 show, there are irregular tubes, the substance of which, a kind of natural glass, is the product of the solution of siliceous sands that have been struck by lightning. The tube is smooth within, but rugose on the outside, on account of the agglutination of imperfectly melted particles of sand. Fulgurites are generally ramified at their lower end. Their interior diameter varies from a millimetre to five centimetres, or two inches; and their length, which is variable, may reach ten metres, or more than thirty feet.
These curious accidents do not seem to have been remarked before 1711, when Hermann observed them in Silesia; since then all the museums have secured specimens of them for their collections. It is hard to get large ones, and they command a high price. At first, their true nature was misapprehended. They were regarded successively as incrustations formed around roots that had disappeared; as the cells constructed by worms of extinct species; and as a kind of stalactites. Hentzen seems to have been the first one who attributed them to lightning; 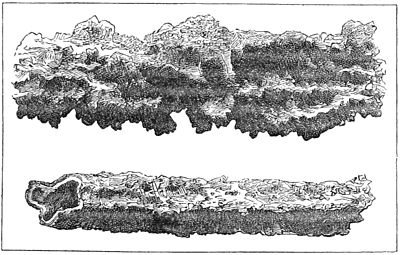 Fig. 2.—Fulgurites. Tubes produced by the vitrification of sand by the passage of lightning through the soil in the deserts of Poland. (From a specimen in the Museum; figure one third the natural size.
and his opinion has been shown to be correct by Blumenbach and by Tiegler. More recently, Nature has been caught in the act; that is, fulgurites have been found in sand which was still hot, at the spot where the lightning had been seen to strike. Besides, several experimenters, as Beudant, Huchette, and Savart, have obtained tubes analogous to fulgurites by discharging the great electrical battery of the Conservatoire des Arts et Metiers through beds of pounded glass, or of sand mixed with sea-salt to make it more fusible. Fulminated tubes are found principally in places where beds of sand lie upon a soil which contains water, and is consequently a conductor of electricity; for example, at certain points in Silesia, in Eastern Prussia, Poland, Cumberland, and Brazil. 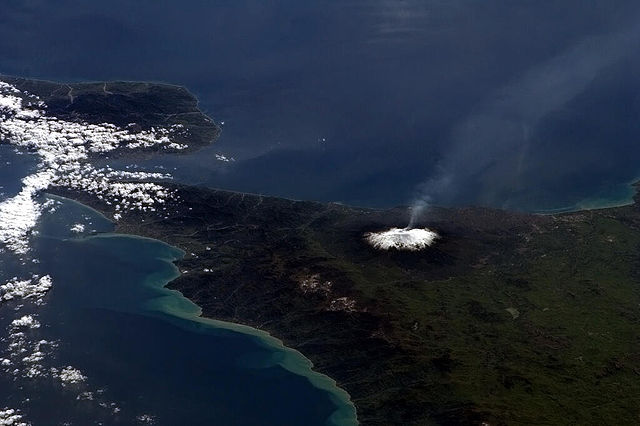