I've recently been trimming part of a clay-ironstone septarian concretion. It's from the namurian shales exposed in Coldberry Gutter in Teesdale; the trimming was to better display its millerite spray (a similar millerite of mine, after trimming, is shown in the video below, and the specimen is discussed on Mindat here).


The detritus from the trimming I examined under magnification. In amongst the kaolinite dust, odd millerite hairs and tiny sceptre quartz crstals, I noticed a flash of red. My cheap stereo microscope soon revealed something I'd never seen before... 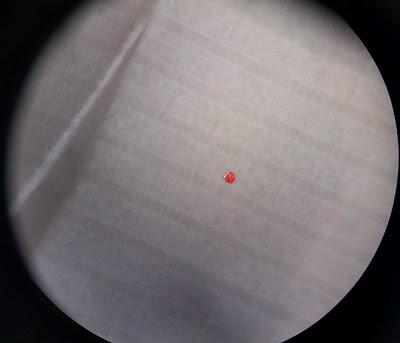 A single, vivid red tabular hexagonal crystal, with a bright metallic lustre, around 0.2mm greatest dimension, and very thin. I think it's pyrrhotite.

It's a beautiful crystal, with only one edge showing a former point of attachment. The edges show modification from an ideal prism - i.e. there appears to be a chamfer around the edge.

It's like the Pyrrhotite no.15 - Goldschmidt (1913-1926) diagram shown above, from the Mindat pyrrhotite page (here) "Crystal Atlas" (although the Coldberry crystal is much thinner than this).

The photos above were taken through an eyepiece of my microscope with a hand-held 4 year old HTC Wildfire 5MP smartphone camera. Sorry about lack of focus, it's not an ideal setup!

The above video shows nowt but the diminutive size of the specimen. As you can see, it's presently stored wrapped in a cigarette paper. It's certainly the smallest specimen of any kind in my collection. And it's the only one I've found. I've always had a close look at the debris from trimming parts of my three millerite bearing nodules, found in the eighties, after smashing many, many Coldberry nodules. So it's rare at Coldberry, as far as I know. This could be the first time anyone's found such a crystal in Teesdale, so I'm seeking further information on the Mindat forum.

Although the colour of the crystal nicely shows why the mineral was named (from the greek pyrrhos - red or flame), another characteristic of pyrrhotite, that it's magnetic, isn't apparent with this crystal. A strong neodymium magnet doesn't even budge it.

Since pyrrhotite isn't mentioned on the Mindat Coldberry page (here), I looked at the other occurrences of millerite bearing ironstone nodules in Britain. I found this reference from the National Museum Wales webpage on pyrrhotite (here).

"South Wales Coalfield: pyrrhotite is an uncommon component of the septarian ironstone nodule-hosted sulphide assemblage, better known for its millerite specimens. Hexagonal platy crystals were recorded from Parc Colliery, Cwm Parc by Firth (1971), while more recently specimens have been found at tips derived from the Gelli and Ferndale collieries in the Rhondda Valley (I.E. Jones, unpublished data)."

I'm sending the crystal to a Mindat member who has very kindly offered to take some better photos and hopefully determine the density of the crystal. A lot of my confidence with the pyrrhotite ID was from the quote above, from the National Museum Wales webpage. This info is now in doubt.

UPDATE - 18.09.14    This morning, my girlfriend just suggested that the tiny crystal "could be anything", meaning something man made. I hadn't considered this, and it got me thinking........ I now know what it is....

It's f***i** GLITTER! Living with my partner and her two teenage daughters, accidental glitter contamination is possible. Upon looking through the Mindat ID thread, I had myself described it "this tiny crystal reflects light like glitter" - and applying the principle of Occam's razor...... A quick search on the internet revealed that this stuff is indeed manufactured as hexagonal flakes. You can even see the bevel I thought was a crystal face. 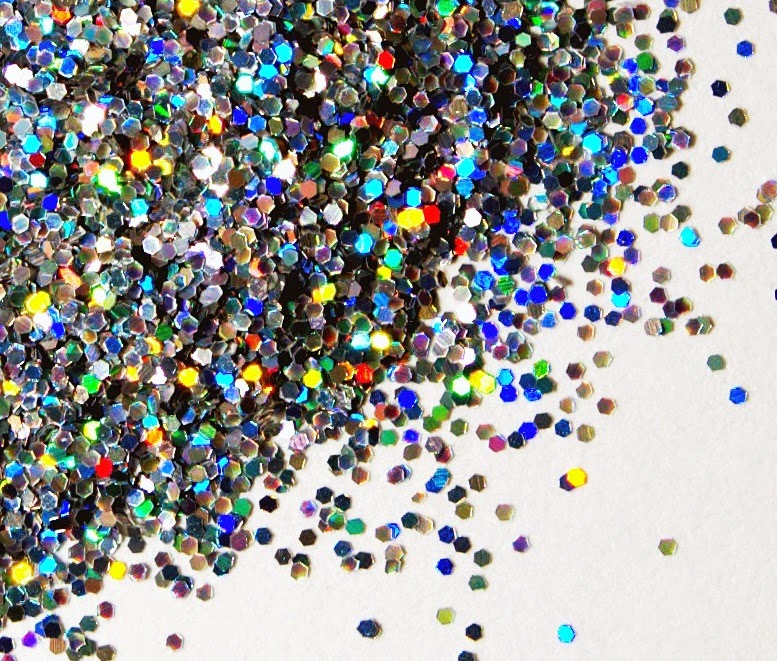 Apparently so much of this stuff is about (millions of kilos), it's used forensically -

It's given me a laugh, even though I'm bloody disappointed it wasn't pyrrhotite!! Thank f*** I hadn't embarked on mounting the thing on a camel's hair brush bristle, or sent it away to waste someone else's time! Beware micro-mounters!

This representation of the photoelectric effect would have Einstein turning in his grave. Wrong!