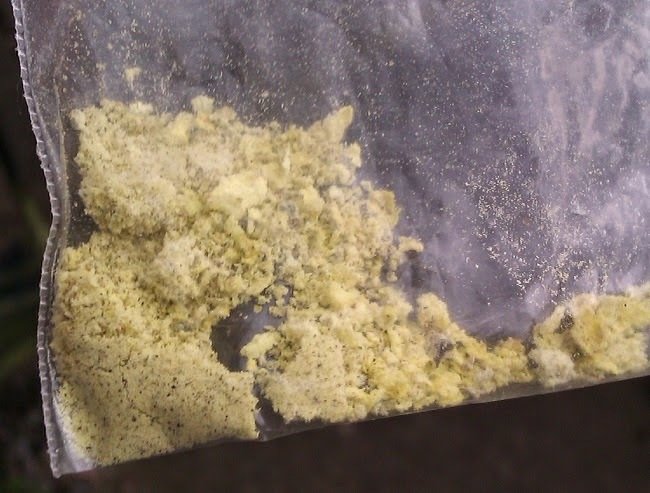 At our place, we like a good fire in the garden of a night. It keeps the chill away, provides excellent sensory input, and illuminates drunk friends. We've had a variety of wood burners, all constructed from scrap. Our latest is built simply using the stainless steel drum from a washing machine, with legs welded on. I'd been given most of the roof lats from an old house which was being re-roofed, so there was no fuel problem, even after it became apparent that the burner really ate wood. Many fires later, and having made no attempt to empty the drum of ash, I noticed a yellow efflorescence appearing at the holes in the stainless steel drum. 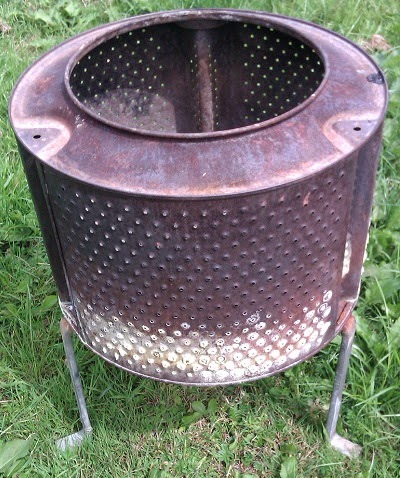 It could only be a chromate, I thought. Somehow the 13 to 26 % chromium in the stainless steel was being removed from the metal. I had vague recollection that chromium was extracted from the mineral chromite by roasting with soda-ash (sodium carbonate) to give sodium chromate. Perhaps the sodium carbonate in the accumulated wood ash was attacking the stainless during burns, producing the chromate. Then, soaked into the wood ash during rain, it leached out as the brightly coloured chemical crystalline efflorescences during dry days. Wrong.... 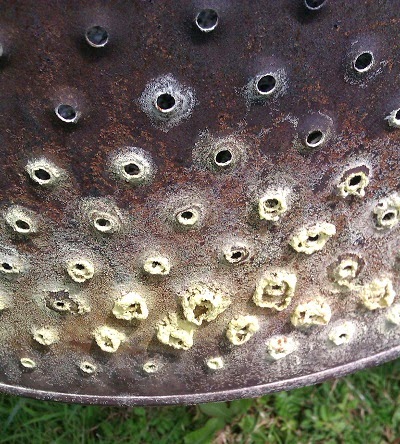 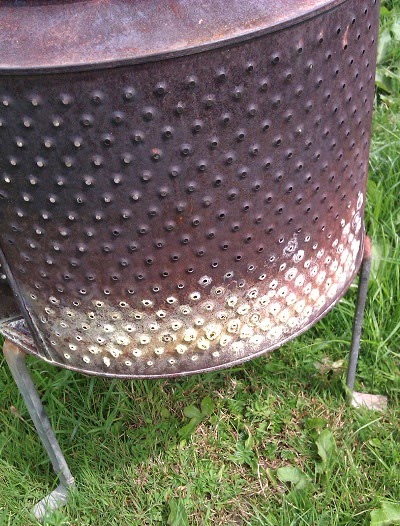 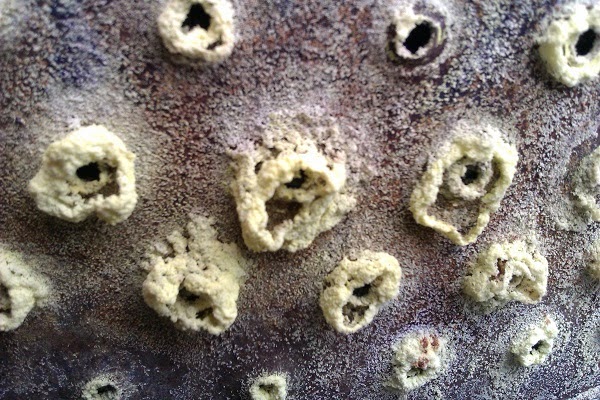 I collected some to look at through the microscope. Individual crystals were discernible, although no distinct morphology was recognised. The yellow crystals had colourless, very tiny, transparent crystals on the outer surfaces of the efflorescences. More on the alarming possible nature of these colourless crystals later.... 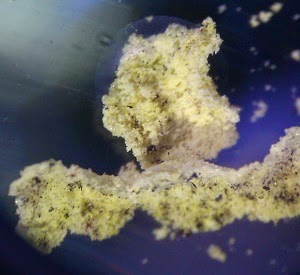 The stuff is very soluble, forming a bright yellow solution. Definitely a chromate. Wood ash contains calcium, sodium and potassium, so it's the chromate of one, or all, of those. I collected the majority of the chemical, a few grams, before digging out the still damp wood ash, to get rid of what I already regarded as toxic waste. There was a lot in the bottom of the tub, which has no holes in it. The damp wood ash had a dirty green tinge to it. The colour reminded me of chromium trioxide "ash" left when an ammonium dichromate volcano is fired. It was the remnants of many fires, and had been contained in the tub, subjected to successive damp after rain, fine weather, and high temperature episodes.

After a thorough wash-down to get rid of all the toxic chemicals, I examined the stainless steel. The drum is corroded, but not to the degree I would have thought. The amount of chromate I collected (a couple of grams), represented only one episode of dry weather. I live in the North East of England, and summer showers (and driving rain) are frequent. Each downfall would dissolve the efflorescences formed in drier weather, and wash the chemicals into the ground. Therefore the amount of chromium in the accumulated wood ash had to be substantial. Far more than I thought could have been released though the corrosion of the steel.

The wood. I'd not really given much attention to the wood I'd been given, from the roof of a 60 year old house. You don't, with stuff that's free. The occasional blue flames from our fires, and the slight green tinge to the wood before it was burned,  I attributed to "some sort of copper based chemical preservative." We never cooked using this wood, except for foil wrapped spuds and yams, because of this.

A modicum of internet research educated me about the alarming chemical concoction actually used as wood preservative - chromated copper arsenate.

CCA for short, this shit had turned my wood burner into veritable heavy metal environmental disaster area! The ash from burning CCA treated wood has been analysed,  "Results of this study indicate that metal concentrations (chromium plus copper plus arsenic) can be as high as 36% of the ash by weight..." (Journal of Hazardous Materials, full report here). With the unusual "design" of the burner, up to a kilo of ash had accumulated at the sealed bottom of the drum and up to the lower "air holes." Even with a more conservative 10% heavy metal concentration, this would account for the continued production of the bright yellow efflorescences on sunny days after a downpour.

Before finding out about chromated copper arsenate, my best guess at the composition of the efflorescences was that it was mainly sodium chromate, mixed with a smaller proportion of potassium chromate. Both are highly toxic, mutagenic and carcinogenic.... Now arsenic had entered the arena. I remembered about the tiny colourless crystals. Out came the stereo microscope again. This time I dissolved a small quantity, put a drop of the solution on a slide and let it evapourate. The dried drop consists of a rim of yellow acicular crystals, with one or two ill-defined green crystallised areas. Inside the rim consists of a dusting of very small colourless crystals. 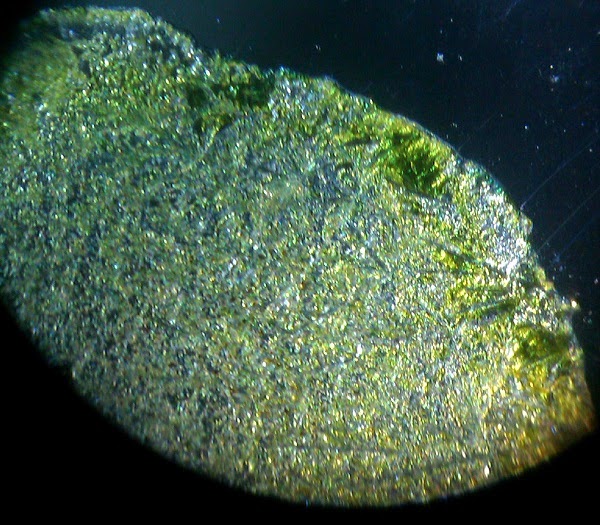 This differential crystallisation is presumably caused by the dissimilar solubility of the various chemicals present.
Solubility of chemicals that could be in the efflorescence -

The green crystals could be a copper salt, but as with all the above, this is pure guesswork. The stuff needs expert analysis. Whatever's in the efflorescences, it's not good. The few grams harvested, if injested, I suspect would make one quite ill... or dead.

I'm going to do some slow crystallisation with half the quantity I have. Larger crystals may show distinctive morphology. The other half I'll make available for analysis. I hope to be able to interest a local university, perhaps they can tell me exactly how lethal my wood burner had become! 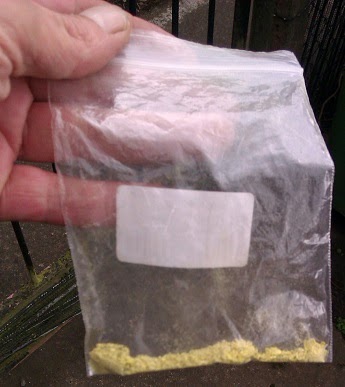 From now on, we'll only be burning untreated wood on the burner, and again, the ash won't be cleared out because of lethargy. I'll then see if stainless steel erosion has played a part in this. If I get results from my crystallisations or from a lab analysis, I'll post them here.

Many thanks to my builder mates, without their generous donation, this intriguing, unintended, back-yard science investigation would not have happened.

Neptunium 237 sphere with highly enriched uranium and then iron neutron reflectors.
The neptunium sphere was 8.29-cm in diameter and its calculated density was 20.29 g/cc. The sphere weighed 6070.4 g and the chemical analysis showed that the sphere was 98.8 wt % neptunium, 0.035 wt % uranium, and 0.0355 wt % plutonium, the remainder being crud. See full details on this criticality experiment here.