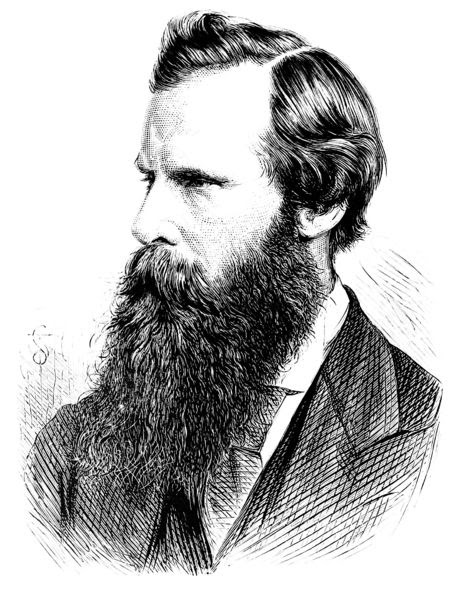 Inventor of the radiometer & crookes tube, discoverer of thallium, Billy Crookes was also a big bang experimentalist with access to radium bromide and a great interest in diamonds. He published his book "Diamonds" in 1909 - Here's what he had to say about diamond synthesis, followed by his radium experiments with diamonds.

GENESIS OF THE DIAMOND
By W. Crookes

SPECULATIONS as to the probable origin of the diamond have been greatly forwarded by patient research, and particularly by improved means of obtaining high temperatures, an advance we owe principally to the researches of the late Professor Moissan.

Until recent years carbon was considered absolutely non-volatile and infusible; but the enormous temperatures placed at the disposal of experimentalists by the introduction of electricity show that, instead of breaking rules, carbon obeys the same laws that govern other bodies. It volatilises at the ordinary pressure at a temperature of about 3600° C, and passes from the solid to the gaseous state without liquefying. It has been found that other bodies, such as arsenic, which volatilise without liquefying at the ordinary pressure, will easily liquefy if pressure is added to temperature. It naturally follows that if along with the requisite temperature sufficient pressure is applied, liquefaction of carbon will take place, when on cooling it will crystallise. But carbon at high temperatures is a most energetic chemical agent, and if it can get hold of oxygen from the atmosphere or any compound containing it, it will oxidise and fly off in the form of carbonic acid. Heat and pressure therefore are of no avail unless the carbon can be kept inert.

It has long been known that iron, when melted, dissolves carbon, and on cooling liberates it in the form of graphite. Moissan discovered that several other metals, especially silver, have similar properties ; but iron is the best solvent for carbon. The quantity of carbon entering into solution increases with the temperature.

For the artificial manufacture of diamond the first necessity is to select pure iron free from sulphur, silicon, phosphorus, etc. and to pack it in a carbon crucible with pure charcoal from sugar. The crucible is then put into the body of the electric furnace and a powerful arc formed close above it between carbon poles, utilising a current of 700 amperes at 40 volts pressure (Fig. 20). The iron rapidly melts and saturates itself with carbon. After a few minutes' heating to a temperature above 4000° C. a temperature at which the iron melts like wax and volatilises in clouds the current is stopped and the dazzling fiery crucible is plunged beneath the surface of cold water, where it is held till it sinks below a red heat. As is well known, iron increases in volume at the moment of passing from the liquid to the solid state. The sudden cooling solidifies the outer layer of iron and holds the inner molten mass in a tight grip. The expansion of the inner liquid on solidifying produces an enormous pressure, and under the stress of this pressure the dissolved carbon separates out in transparent forms minutely microscopic, it is true all the same veritable diamonds, with crystalline form and appearance, colour, hardness, and action on light, the same as the natural gem.

Now commences the tedious part of the process. The metallic ingot is attacked with hot nitro-hydrochloric acid until no more iron is dissolved. The bulky residue consists chiefly of graphite, together with translucent chestnut-coloured flakes of carbon, black opaque carbon of a density of from 3-0 to 3-5 and hard as diamonds black diamonds or carbonado, in fact and a small portion of transparent, colourless diamonds showing crystalline structure. Besides these there may be carbide of silicon and corundum, arising from impurities in the materials employed.

The residue is first heated for some hours with strong sulphuric acid at the boiling point, with the cautious addition of powdered nitre. It is then well washed and for two days allowed to soak in strong hydrofluoric acid in cold, then in boiling acid. After this treatment the soft graphite disappears, and most, if not all, the silicon compounds have been destroyed. Hot sulphuric acid is again applied to destroy the fluorides, and the residue, well washed, is attacked with a mixture of the strongest nitric acid and powdered potassium chlorate, kept warm but not above 6o° C, to avoid explosions. This treatment must be repeated six or eight times, when all the hard graphite will gradually be dissolved and little else left but graphitic oxide, diamond, and the harder carbonado and boart. The residue is fused for an hour in fluorhydrate or fluoride of potassium, then boiled out in water and again heated in sulphuric acid. The well - washed grains which resist this energetic treatment are dried, carefully deposited on a slide, and examined under the microscope. Along with numerous pieces of black diamond are seen transparent, colourless pieces, some amorphous, others with a crystalline appearance. Although many fragments of crystals occur, it is remarkable I have never seen a complete crystal. All appear shattered, as if on being liberated from the intense pressure under which they were formed they burst asunder. I have singular evidence of this phenomenon. A fine piece of artificial diamond, carefully mounted by me on a microscopic slide, exploded during the night and covered the slide with fragments. Moissan's crystals of artificial diamond sometimes broke a few weeks after their preparation, and some of the diamonds which cracked weeks or even months after their preparation showed fissures covered with minute cubes. I have explained that this bursting paroxysm is not unknown at the Kimberley mines. So far, all such artificial diamonds are microscopic. The largest artificial diamond is less than one millimetre across.

These laboratory diamonds burn in the air before the blowpipe to carbonic acid. In lustre, crystalline form, optical properties, density, and hardness they are identical with the natural stone.

In several cases Moissan separated ten to fifteen microscopic diamonds from a single ingot. The larger of these are about 0-75 mm. long, the octahedra being 0-2 mm.

Along with carbon, molten iron dissolves other bodies which possess tinctorial powers. We know of blue, green, pink, yellow, and orange diamonds. One batch of iron might contain an impurity colouring the stones blue, another lot would tend towards the formation of pink stones, another of green, and so on. Cobalt, nickel, chromium, and manganese, all metals present in the blue ground, would produce these colours.

A New Formation of Diamond

I have long speculated as to the possibility of obtaining artificially such pressures and temperatures as would fulfil the above conditions. In their researches on the gases from fired gunpowder and cordite, Sir Frederick Abel and Sir Andrew Noble obtained in closed steel cylinders pressures as great as 95 tons to the square inch, and temperatures as high as 40000° C. According to a paper recently communicated to the Royal Society, Sir Andrew Noble, exploding cordite in closed vessels, has obtained a pressure of 8000 atmospheres, or 50 tons per square inch, with a temperature reaching in all probability 54000 Ab.

Here, then, we have conditions favourable for the liquefaction of carbon, and were the time of explosion sufficient to allow the reactions to take place, we should certainly expect to get the liquid carbon to solidify in the crystalline state. [Sir James Dewar, in a Friday evening discourse at the Royal Institution in 1880, showed an experiment proving that the temperature of the interior of a carbon tube heated by an outside electric arc was higher than that of the oxy-hydrogen flame. He placed a few small crystals of diamond in the carbon tube, and, maintaining a current of hydrogen to prevent oxidation, raised the temperature of the tube in an electric furnace to that of the arc. In a few minutes the diamond was transformed into graphite. At first sight this would seem to show that diamond cannot be formed at temperatures above that of the arc. It is probable, however, for reasons given above, that at exceedingly high pressures the result would be different.]

By the kindness of Sir Andrew Noble I have been enabled to work upon some of the residues obtained in closed vessels after explosions, and I have submitted them to the same treatment that the granulated iron had gone through. After weeks of patient toil I removed the amorphous carbon, the graphite, the silica [The silica was in the form of spheres, perfectly shaped and transparent, mostly colourless, but among them several of a ruby colour. When 5 per cent of silica was added to cordite, the residue of the closed vessel explosion contained a much larger quantity of these spheres.], and other constituents of the ash of cordite, and obtained a residue among which, under the microscope, crystalline particles could be distinguished. Some of these particles, from their crystalline appearance and double refraction, were silicon carbide ; others were probably diamonds. The whole residue was dried and fused at a good red heat in an excess of potassium bifluoride, to which was added, during fusion, 5 per cent of nitre. (Previous experiments had shown me that this mixture readily attacked and dissolved silicon carbide ; unfortunately it also attacks diamond to a slight degree.) All the operations of washing and acid treatment were performed in a large platinum crucible by decantation (except the preliminary attack with nitric acid and potassium chlorate, when a hard glass vessel was used) ; the final result was washed into a shallow watch-glass and the selection made under the microscope. The residue, after thorough washing and then heating in fuming sulphuric acid, was washed, and the largest crystalline particles picked out and mounted.

From the treatment the residual crystals had undergone, chemists will agree with me that diamonds only could stand such an ordeal; on submitting them to skilled crystallographic authorities my opinion is confirmed. Speaking of the largest crystal, one eminent authority calls it " a diamond showing octahedral planes with dark boundaries due to high refracting index." After careful examination, another authority writes of the same crystal diamond, " I think one may safely say that the position and angles of its faces, and of its cleavages, the absence of birefringence, and the high refractive index are all compatible with the properties of the diamond crystallising in the form of an octahedron. Others of the remaining crystals, which show a similar high refractive index, appeared to me to present the same features."

It would have been more conclusive had I been able to get further evidence as to the density and hardness of the crystals; but from what I have already said I think there is no doubt that in these closed vessel explosions we have another method of producing the diamond artificially. 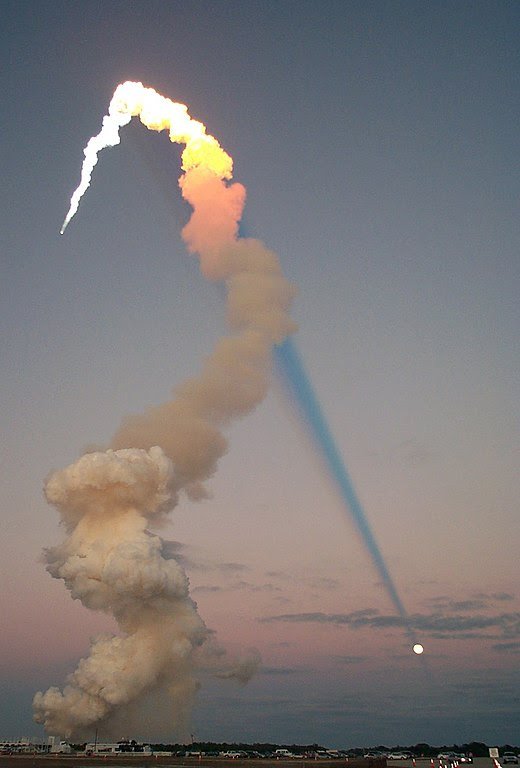 Interesting Shuttle launch just after sunset.
The rocket plume casts a shadow towards the full moon.
Photo by Patrick McCracken.

WARNING - Many subjects outlined within this site are extremely dangerous and are provided here for information only. Please don`t experiment with high voltages or chemicals unless you are fully conversant with safe laboratory practices. No liability will be accepted for death, injury or damage arising from experimentation using any information or materials supplied.
Posted by Unknown at 13:36