Galvanic Reanimation of the Dead 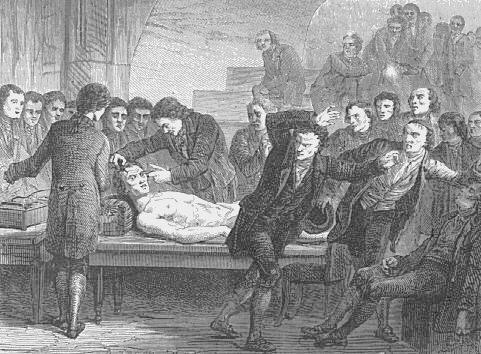 The Galvanic Reanimation of Matthew Clydesdale

Experiments were performed on the corpse of Matthew Clydesdale (a freshly killed murderer) at the Glasgow University anatomy theatre, by Dr. Ure and Prof. Jeffray on the 4th november 1818

This account, from The Young Man`s Book of Amusement. 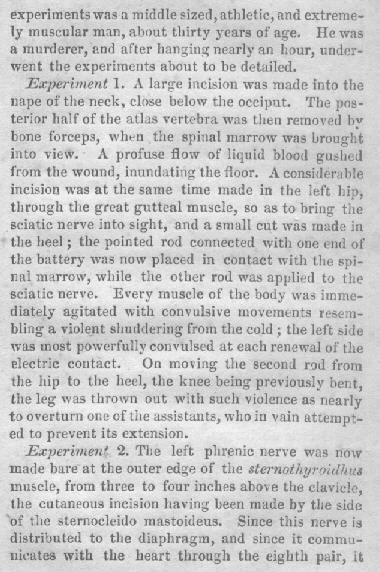 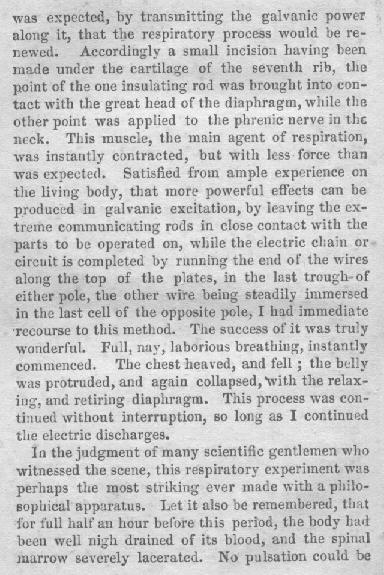 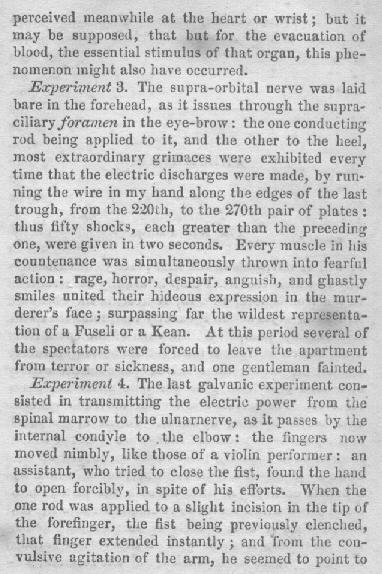 In 1803 Giovanni Aldini (Galvani`s nephew) performed experiments, in public, upon the severed heads of "malefactors" despatched in Bologna and at Newgate, London. A few accounts of these horrific demonstrations - 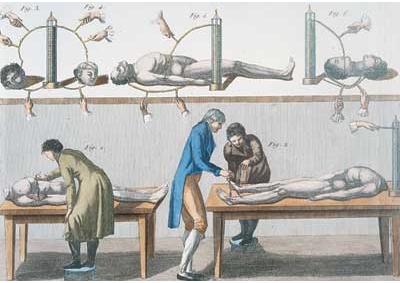 A very ample series of experiments were made by Professor Aldini which show the eminent and superior power of galvanism beyond any other stimulant in nature. In the months of January and February last, he had the courage to apply it at Bologna to the bodies of various criminals who had suffered death at that place, and by means of the pile he excited the remaining vital forces in a most astonishing manner.

This stimulus produced the most horrible contortions and grimaces by the motions of the muscles of the head and face; and an hour and a quarter after death, the arm of one of the bodies was elevated eight inches from the table on which it was supported, and this even when a considerable weight was placed in the hand.

George Forster was hung at 8am on 18th January 1803 at Newgate Prison, for the drowning of his wife and youngest child in the Paddington Canal. After hanging for an hour in sub-zero temperatures, Aldini procured the body and began his galvanic experiments.

On the first application of the process to the face, the jaws of the deceased criminal began to quiver, and the adjoining muscles were horribly contorted, and one eye was actually opened. In the subsequent part of the process the right hand was raised and clenched, and the legs and thighs were set in motion. Mr Pass, the beadle of the Surgeons’ Company, who was officially present during this experiment, was so alarmed that he died of fright soon after his return home.

“the jaw began to quiver, the adjoining muscles were horribly contorted, and the left eye actually opened … The action even of those muscles furthest distant from the points of contact with the arc was so much increased as almost to give an appearance of re-animation … vitality might, perhaps, have been restored, if many circumstances had not rendered it impossible.”

"Galvanism was communicated by means of three troughs combined together, each of which contained forty plates of zinc, and as many of copper. On the first application of the arcs the jaw began to quiver, the adjoining muscles were horribly contorted, and the left eye actually opened."


"The first of these decapitated criminals being conveyed to the apartment provided for my experiments, in the neighbourhood of the place of execution, the head was first subjected to the Galvanic action. For this purpose I had constructed a pile consisting of a hundred pieces of silver and zinc. Having moistened the inside of the ears with salt water, I formed an arc with two metallic wires, which, proceeding from the two ears, were applied, one to the summit and the other to the bottom of the pile. When this communication was established, I observed strong contractions in the muscles of the face, which were contorted in so irregular a manner that they exhibited the appearance of the most horrid grimaces. The action of the eye-lids was exceedingly striking, though less sensible in the human head than in that of an ox."

"As you can see, the positive prime conductor is connected to the common lower plate. I use a copper wire conductor (from my galvanic experiments on the dead body of a criminal) to communicate the upper plates." from Victorian Nitrogen Laser

"It is somewhat of an improvement since his dreadful grey pallor (induced by either mercurial silvering or by the concentration of glowing barium) was causing me to wonder if I‘d soon be galvanically re-animating his corpse." from Victorian Tesla Coil

"Well, I know a blatant attempt to cover up lazy ineptitude with half-baked theoretical excuses, as well as you do Faraday. But the serious nature of his delusional madness caused me to refrain from thrashing him on this occasion. Instead, on Friday when Mr. Groves the horse doctor is due, I‘ll ask him to not only remove Hodges right hand (which, I‘m afraid, has gone completely black, is thumbless, and has started to emanate the most appalling stench), but to drill into Hodges cranium at the left temple, and then to work his magic with his carbuncle lance & flencing hooks.

I have seen Mr. Groves completely alter the nature of an uncontrollable rabid war stallion with a few deft intra-cranial thrusts, Faraday, and I think Hodges will much benefit from Mr. Groves experience in these matters. Hodges should present Mr. Groves with little difficulty, his skull being much thinner than that of a horse, and his condition being much less grave than that of the aforementioned equine veteran of the Crimean campaign.

I must confess, Faraday, that I do hope to be able to discharge a Leyden Jar or two into Hodges‘ grey-matter, should the opportunity arise during Mr. Groves‘ ministrations. I‘m not one to miss out upon galvanic experimentation upon a living brain, and violent electrical discharges direct to the grey matter could perhaps enhance the effects of the flencing, and be of further benefit to Hodges. I will shirk no possible endeavor to return Hodges to Sanity, and Newtonian thought! I will, of course Faraday, inform you of the result of these experiments.

I think Hodges is expecting to be rendered unconscious with diethyl ether for the amputation on Friday, however both Mr. Groves and myself prefer him to be conscious and aware. Mr. Groves needs to accurately judge flencing depth by the look of the eye and the twitching of the fetlocks. And I, to be quite honest Faraday, would prefer to observe and record Hodges‘ conscious facial expressions upon discharge to the brain, a phenomenon I have previously witnessed only with the dead." from Victorian Cyclotron

"Glitch dragged his eyes from the dead face and consulted his timepiece, "My goodness! We have only a minute to effect re-animation! Ted, remember well that quotation from Leonardo Da Vinci, it is a philosophy I continually try to instill into my assistant. Hodges! The digitalis, coramine and strychnine syringe with, I think, a five inch needle. Look smart man! These men are dead!" from The Glitch Ranunculaceous Death-Spray

"How I, then a young girl, came to think of, and to dilate upon, so very hideous an idea?"
asks Mary Shelley, who conceived the idea for her novel during the "Year Without a Summer," following the eruption of Tambora.

Frankenstein: or, The modern Prometheus
By Mary Wollstonecraft Shelley
scroll down using controls at right

Another reanimation theme is presented in the following grippingly dull short story, published in 1863


Sentenced to Death. A True Story. By Wilmot Buxton

"Quick, Reuben, the battery," exclaimed Asphodel to his assistant, " there is yet strong hope of reanimating this seeming corpse ; there is no dislocation of the vertebral column." The galvanic battery was quickly adjusted, ...


scroll down using controls at right, use + button to magnify

"Le docteur Ure galvanisant le corps de l'assassin Clydsdale."
Note the electric battery to the far left of Clydesdale's head and the drunk who is unaware of the dead man's grimaces
An engraving from Les merveilles de la Science (1867) by Louis Figuier

WARNING - Many subjects outlined within this site are extremely dangerous and are provided here for information only. Please don`t experiment with high voltages or chemicals unless you are fully conversant with safe laboratory practices. No liability will be accepted for death, injury or damage arising from experimentation using any information or materials supplied.
Posted by Unknown at 18:17