The flats of the Boltsburn Mine, under Rookhope in the North Pennines, produced the best crystallised fluorite in Britain. Here are two accounts of the mineralisation, one from 1904, the other 1926.

"The Boltsburn Flats - Their Interest to the Student of Nature" by Stephen Watson. 1904.

"The lead ore deposits of Weardale are met with in the form of the fissure vein and the flat. We can gain a rough idea of the former by imagining the rocks for miles in length and unknown fathoms in depth being split in two at right angles, or nearly so, to the bedding planes, and separated a distance of say 3, 6, or 9 feet, the open space between then filled in with spar, ore, and other minerals forming the usual contents of a lode.

The flat, on the contrary, is a horizontal deposit lying conformable to the strata, generally three or four feet thick, but in the case before us reaching a thickness of many fathoms... The horizon of the flats is the great limestone... (this) is from 10 to 12 fathoms in thickness, and it contains three flats termed the high, middle and low flat, the top one being the thickest and most productive. The flats under notice in this paper are those in connection with Boltsburn vein, which are now being worked eastward from the watershed of Rookhope and Stanhope burns at a depth of over 100 fathoms below the surface, the mining excavations on which have revealed phenomena of interest to the geologist, the mineralogist, and the general student of nature.... Instead of the usual well defined three flats we find one large flat, and as a consequence the loughs or cavities are on a larger scale than ordinary, in some cases forming caverns of considerable magnitude.

These spacious chambers give Nature the opportunity of modelling her creations on larger lines hence the massive cubes of fluor spar and huge bosses of crystallized galena. Entering one of these caverns immediately after being broken into by the miners, you find yourself surrounded by crystallized fluorite, the only stepping places being points and angles of six inch cubes. You admire the various shades of purple blue and heliotrope in the translucent crystals, and notice that some of the others are pale and cloudy. As you move carefully along its winding course, new forms of groups arrest the eye, and you note that some of the cubes are studded with calcite, and others are coated with fine white quartz, the diamond-like sparkle of the latter showing very effectively against the dark background of fluor. Another bend any you are confronted with an isolated cube measuring 12 inches across its face, and perfect in every line and angle. Having walked some 20 or 30 feet you find your further progress barred, although the vista of beauty still extends as far as the light of your candle can penetrate.

Another type of lough is low and wide-spreading, paved with fluorite and roofed with pure galena 6 to 12 inches thick in some cases, chemical affinity thus showing itself curiously antagonistic to the force of gravitation; more commonly however these minerals are found irregularly distributed over floor and roof alike. Chalybite or iron carbonate sometimes predominates in a lough, every part of which is then rounded off and combed over with a moss-like formation, light brown, pale yellow, or whitish in colour, with a few minute crystals of fluorite scattered here and there upon its surface. Some of the smaller loughs are the most showy, the fluorite displaying a finer finish, the galena a more silvery lustre... Among the curious formations in the loughs may be mentioned the cubes or rectangular blocks found loose on the floor, differing in appearance from the attached crystals, and showing no signs of fracture - all the surfaces being equally smooth. They are of all sizes, from 1/4 inch to 10 inches, and do not appear to have formed on any nucleus... Another is a remarkable deposit of of calcite, 2 feet thick in places, found abutting on the prevailing fluorite... In conclusion I would say the student cannot fail to observe, in the mine as on the surface, how largely the idea of beauty enters into the plan of Creation."

Copied from pages 17 & 18 of Ian Forbes' excellent book "Secret Worlds, SPAR BOXES of the North Pennines." ISBN 0-902178-21-0. Originally written by the mine manager and agent for the Weardale Lead Co., Steven Watson, and published 1904 in the Weardale Naturalists' Field Club Transactions.

"At Boltsburn we were received by Mr. H. S. Willis, the general manager of the Weardale Lead Company, and were conducted to the workings by Mr. Thomas Maddison, the manager of the mine. After descending the shaft, a journey of over two miles was made in the ore-wagons along a level driven on the vein. A further descent followed by a short walk brought us to no. 3 Flat, one of the remarkable deposits of galena for which this mine is famous, which lie in the Great Limestone on either side of the vein and appear to be the result of metasomatic replacement. Here we found ourselves in a large room-like excavation, some 10 to 15 feet high, in which work was busily in progress. An examination of the walls revealed a mass of lenticles and strings of galena and also numerous cavities lined with brilliant cube-octahedra of this mineral with which were associated cubes of fluorite and saddle-shaped crystallizations of chalybite or ferruginous dolomite. Much excellent collecting was done here, and it was with reluctance we tore ourselves away to follow our guide to other similar excavations in which we were rewarded by the sight of cavities lined with great cubes or fluorite measuring up to 6 or even 10 inches along their sides. The visit to these flats marked the culminating point of our excursion, and we could only regret that circumstances did not permit us to linger longer in this in treasure house."

Here's an excerpt from Charles V. Clark's extremely interesting book  "Beyond My Own Lamp's Beam" (Details his attempt to reopen Greenlaws Mine East Vein, ISBN 1-906775-03-6), a quote from Sir Kingsley Dunham -

"Although the North Pennines orefield has produced a wealth of minerals through the years, it is fluorite that has made the region famous with collectors because of the well developed and generally colourful nature of specimens occurring in cavities in both the veins and the flats of the many mines. The "habit" is almost always cubic and crystals under approximately 3 cm are almost invariably penetration twins, whereas larger crystals are typically untwinned and opaque. The one notable exception to this is the Boltsburn Mine which produced  twinned fluorite crystals of  "good clarity" in excess of 10 cm on edge. Cavities were found in "flat" deposits which occurred on both sides of a fissure vein. Irregular cavities up to 50 feet long and only a few feet high were encountered in this belt completely lined with crystals. Fluorite in partly-developed cubes as much as 15 inches on the side were observed. Complete cubes up to 6 inches side with penetration twinning were not uncommon and were picked out for use in optical work."

Information about the Boltsburn Mine with respect to fluorite production - 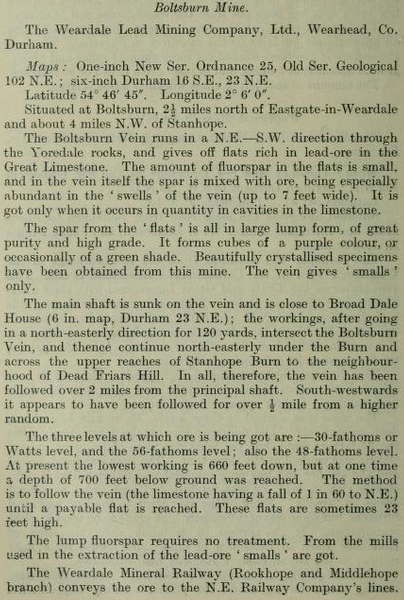 Information about the Boltsburn Mine with respect to galena production - 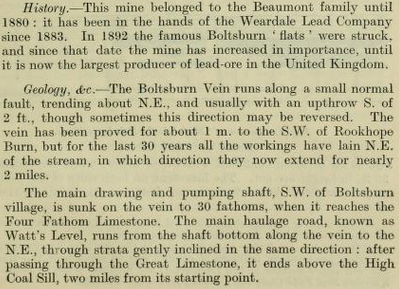 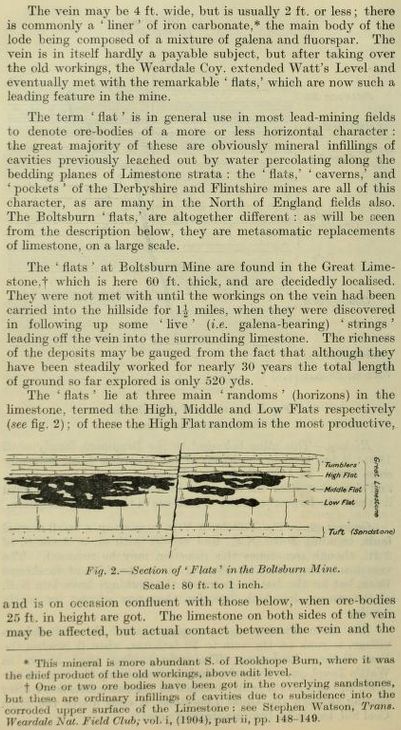 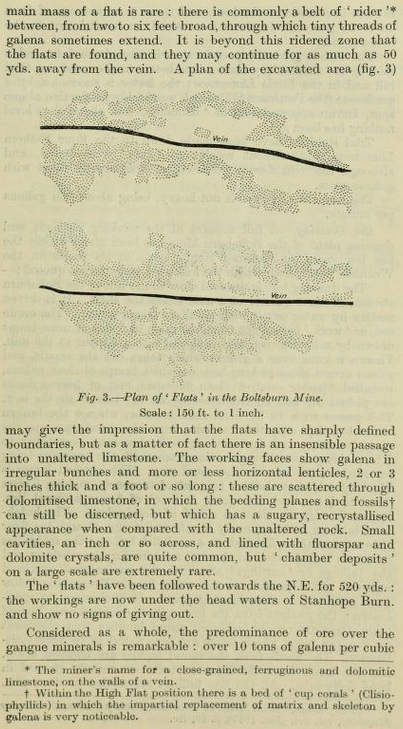 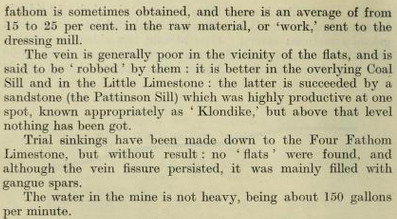 WARNING - Many subjects outlined within this site are extremely dangerous and are provided here for information only. Please don`t experiment with high voltages or chemicals unless you are fully conversant with safe laboratory practices. No liability will be accepted for death, injury or damage arising from experimentation using any information or materials supplied.
Posted by Unknown at 15:21