From the evidence brought out at the inquest, it appeared that a considerable quantity of a very dangerous material, which, on examination, proved to be nitro-glycerine (for blasting purposes in mines, &c.), was stored in a cellar at the White Swan Yard, Cloth Market. On examining the cellar, the police found eight tins. After conferring with the magistrates and Town Clerk, it was ordered to be removed out of the town or destroyed. Not being able to induce the Railway Company to carry it, it was decided to destroy it by removing it to the Town Moor, and emptying it into the earth at a part of the Moor where there was a subsidence in the ground, caused by the workings of the Spital Tongues Colliery.

The Sheriff and Mr. Bryson determined to accompany the material to its destination, and see it destroyed. When on their way to the Moor, Mr. Mawson thought it desirable to examine one or two of the cases, for the purpose of ascertaining what kind of instruments would be required for opening them. While this was being done a number of people congregated round the cart which was conveying the material, and afterwards accompanied it to the Moor. On arriving at the spot on the Moor, which is a little to the west of the Cholera Hospital, there were eight canisters in baskets, and one without a covering of that kind, taken from the cart and placed upon the turf; and, by direction of the Town Surveyor and the Sheriff, the cartman, the labourer, Sub Inspector Wallace, and P.C. 34 A. Donald Bain (who had also been sent on this duty), proceeded to draw the corks.

Mr. Bryson drew several of the corks, a pricker being used for the purpose. They emptied the liquid of the whole nine into the subsidence of the earth, and after this was done they found that three of the canisters still felt weighty. The Sheriff thereupon ordered the men to take off the ends, which was done by means of a shovel, when it was found that a portion of the contents had crystallised, and were adhering to the tin. The Sheriff expressed a desire to obtain a piece of the crystallised material, and asked for a piece of paper, but what followed is not known. He said, however, "Bring them away and we will bury them on the other hill," referring to a hill a little further from where they put the liquid material. He also gave directions to Sub-Inspector Wallace to place some soil over the spot into which they had poured the liquid.

Wallace immediately engaged himself in this occupation, and Bain, Shotton, Appleby, the Sheriff, and the Town Surveyor, went away to the hill with the three canisters containing the crystallised nitro-glycerine, for the purpose of burying it. What occurred here is unknown, and probably never will be. The Sub-Inspector had got his task completed, and was about leaving to join the others, when a dreadful explosion took place. Wallace felt the earth shake, and at the same time saw fragments f clothing and other articles flying high up in the air. Though so near to the scene of the explosion, he was happily uninjured himself, his escape being accounted for by the fact that the bank was between him and the explosion.

He immediately proceeded to the spot, and, on the west side of the hill, where the explosion took place, found a portion of the body of P.C. Bain dreadfully mutilated and shattered - the other portions of the body, horrible to relate, being blown away. On the south side of the hill was also a body frightfully mutilated: this was the body of Thomas Appleby (he was thought to be  a 'carter's boy'); and, near at hand, was the body of Shotton, the labourer, also mutilated. In a hole of the ground, immediately above, was a boy alive, but greatly injured: this was the son of Mr. Wadley, living in Villa Place, The body of another man, unknown, was also found. Mr, Bryson, severely injured, was lying on the side of the bank to the eastward; and immediately on the top of the bank was Mr. Mawson, who was also much injured. Wallace raised Mr. Bryson, but he was unable to speak. Mr. Mawson was able to raise himself up, and sat upon the grass. Wallace, seeing nothing could be done by himself to aid the unfortunate sufferers, promptly got into the cab which had brought Mr. Mawson and Mr. Bryson up, and which was waiting some distance off, and drove into the town in order to procure medical aid.
Roxburgh, the cabman, when left by Mr. Mawson and Mr. Bryson, was told to remain a few minutes. After waiting for a time, his horses began to get cold and weary, and he got upon the box and drove them about a little. His attention was thus drawn away from what was going on amongst the others. In a short time, however, the explosion took place. The force of it blew him off his seat on to the horses, and also broke the windows of the cab, though he was at least one hundred yards from the spot. On looking round, he saw clothes and one of the canisters flying in the air. He drove Sub-Inspector Wallace rapidly down into the town, and Wallace gave information of the occurrence to Mr. Joseph Fife and Dr. Heath, who immediately proceeded to the scene of the disaster.

It was singularly fortunate that, at the moment of the catastrophe, Mr. Walpole, one of the resident surgeons at the Infirmary, was walking upon the Moor, at no great distance from where the explosion took place. Dust, stones, fragments of clothing, and other things suddenly surrounded him. Three hundred yards or so from the spot where the proceedings had been going on, he found the foot of a human being - presumably that of poor Bain; and shreds of clothing, human flesh, and other matter lay scattered about. Mr. Walpole hurried forward, and discovered Mr. Bryson - a ghastly spectacle - lying in one of the excavations.

After those about had recovered their senses, it was proposed that, as Mr. Bryson to all appearance was dead, it would be as well to leave him in the adjoining hospital. Mr. Walpole, however, persevered, administered stimulants, and upon his suggestion, the cart which had brought the destructive material to the ground was made a means of conveying those injured to the Infirmary. They were Mr. Bryson, Town Surveyor; Mr. Mawson, the Sheriff of Newcastle; and Samuel Wadley, a boy who had been a spectator. The boy Wadley died about two hours after being admitted into the Infirmary. Mr. Mawson and Mr. Bryson both died the following night.
The jury returned the following verdict:- "That death has been caused by the explosion of nitro-glycerine accidentally; and the jury are unanimously of opinion that the law in reference to the storing of nitro-glycerine has been grossly violated in this case." 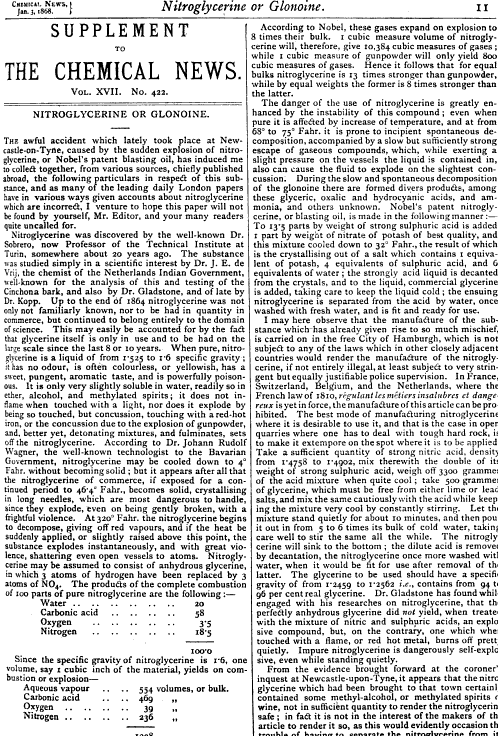 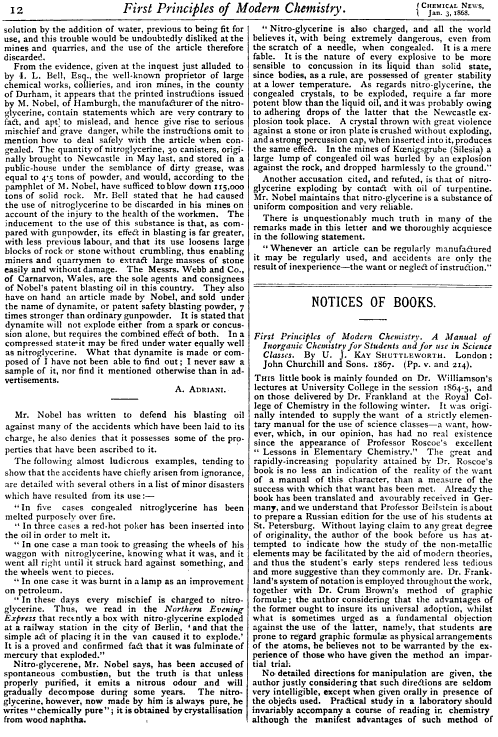