"Tore off both legs from the unfortunate M. Hervy" 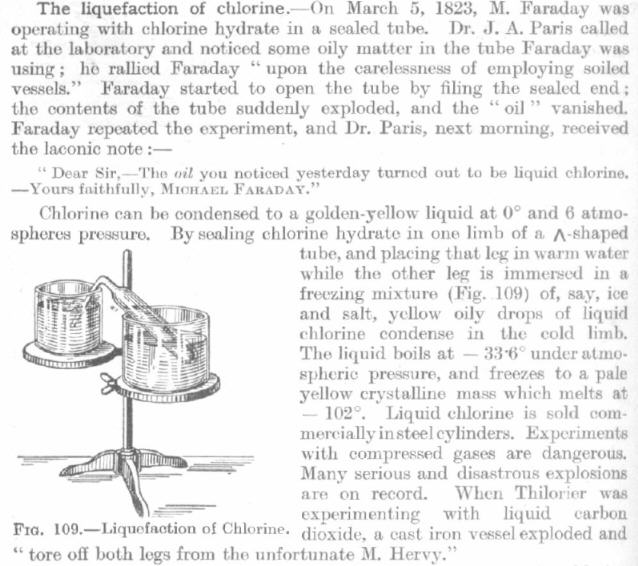 The accident is mentioned in an 1843 letter from Justus Liebig -

"When sulphuric acid is poured upon limestone in an open vessel, carbonic acid escapes with effervescence as a gas, but if the decomposition is effected in a strong, close, and suitable vessel of iron, we obtain the carbonic acid in the state of liquid. In this manner it may be obtained in considerable quantities, even many pounds weight. Carbonic acid is separated from other bodies with which it is combined as a fluid under a pressure of thirty-six atmospheres.
The curious properties of fluid carbonic acid are now generally known. When a small quantity is permitted to escape into the atmosphere, it assumes its gaseous state with extraordinary rapidity, and deprives the remaining fluid of caloric so rapidly that it congeals into a white crystalline mass like snow: at first, indeed, it was thought to be really snow, but upon examination it proved to be pure frozen carbonic acid.
This solid, contrary to expectation, exercises only a feeble pressure upon the surrounding medium. The fluid acid inclosed in a glass tube rushes at once, when opened, into a gaseous state, with an explosion which shatters the tube into fragments; but solid carbonic acid can be handled without producing any other effect than a feeling of intense cold. The particles of the carbonic acid being so closely approximated in the solid, the whole force of cohesive attraction (which in the fluid is weak) becomes exerted, and opposes its tendency to assume its gaseous state; but as it receives heat from surrounding bodies, it passes into gas gradually and without violence.
The transition of solid carbonic acid into gas deprives all around it of caloric so rapidly and to so great an extent, that a degree of cold is produced immeasurably great, the greatest indeed known. Ten, twenty, or more pounds weight of mercury, brought into contact with a mixture of ether and solid carbonic acid, becomes in a few moments firm and malleable.
This, however, cannot be accomplished without considerable danger. A melancholy accident occurred at Paris, which will probably prevent for the future the formation of solid carbonic acid in these large quantities, and deprive the next generation of the gratification of witnessing these curious experiments. Just before the commencement of the lecture in the Laboratory of the Polytechnic School, an iron cylinder, two feet and a half long and one foot in diameter, in which carbonic acid had been developed for experiment before the class, burst, and its fragments were scattered about with the most tremendous force; it cut off both the legs of the assistant and killed him on the spot. This vessel, formed of the strongest cast-iron, and shaped like a cannon, had often been employed to exhibit experiments in the presence of the students. We can scarcely think, without shuddering, of the dreadful calamity such an explosion would have occasioned in a hall filled with spectators."

In The Land Of The Northern Lights from Ole C. Salomonsen on Vimeo.

WARNING - Many subjects outlined within this site are extremely dangerous and are provided here for information only. Please don`t experiment with high voltages or chemicals unless you are fully conversant with safe laboratory practices. No liability will be accepted for death, injury or damage arising from experimentation using any information or materials supplied.
Posted by Unknown at 19:32