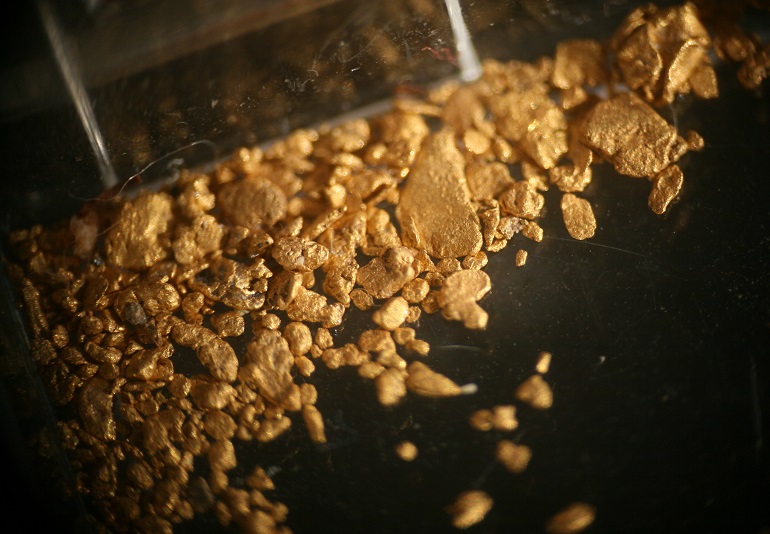 In 1977 I drove my Dad's Mazda way up north. To the site of the Great Scottish Gold Rush of 1869. I camped at the old site of Carn na Buth – Gaelic for ‘hill of tents,’ the former settlement of 69'er gold diggers on the Suisgill Burn. 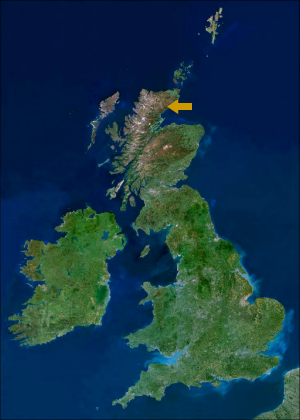 Together with the nearby Baile an Or – ‘town of gold’ on the Kildonan Burn, these shanty villages housed some 500 folk who had flocked to the area in early 1869.

The above zoomable map shows the location of my auriferous endeavours in '77. Not having a "proper" Estwing plastic gold-pan, I used an aluminium camping frying pan for the panning. It worked. In 1869 the pan I used would have been worth it's weight in gold, aluminium being so scarce. I was employed at the GEC chemilab at Aycliffe at the time, a summer job between 6th form and university. Being in the lab enabled me to very accurately measure the weight of my gold, and to seal it in a nice glass tube -

The above tube of gold was unfortunately stolen from my house by a workman some years ago :(  Not all my Scottish gold was nicked however. Fortuitously I'd driven up to the Suisgill burn again in the summer of 1978, and then in 1980 with best friends Jeff Rand, Alan Hornsby and my Dad, Alan Curry. These combined efforts, when we weren't drinking heavily at the Bridge Hotel, Helmsdale, gleaned .539 grams. Fortunately this gold wasn't being stored in my (rifled) mineral drawers, so it's survived to this day, including the 2.6 x 2.0 x 1.2 millimetre Hornsby Nugget, a 27 milligram beauty - 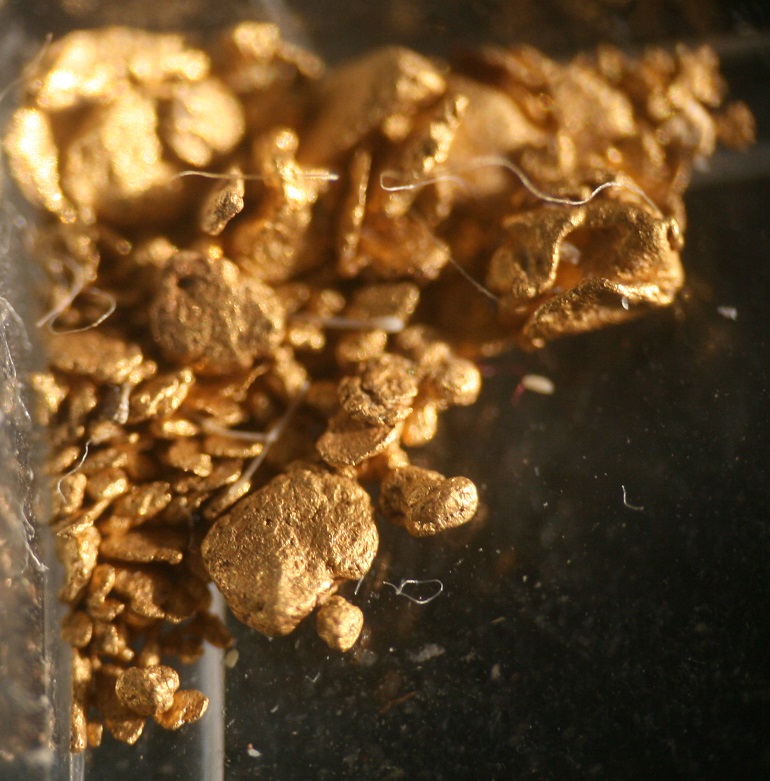 When the panning of Suisgill burn alluvium is complete, the gold (Au & Ag) remains in the pan with magnetite (Fe3O4), ilmenite (FeTiO3), almandine garnets (Fe3Al2[SiO4]3) and No.8 shotgun pellets (Pb). Here's what I collected from a few pans (11.2 grams), with the gold and most of the magnetite removed - 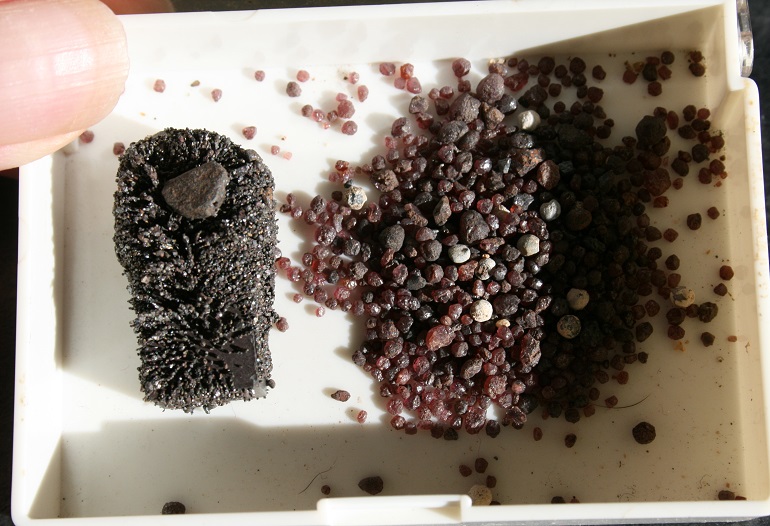 The magnetite can be seen sticking to a magnet, the purple/pink almandine garnets are mixed with black ilmenite particles, and the shotgun pellets are weathered white with a coating of cerrusite and anglesite. Here's some close-ups, with the dodecahedral crystalline form apparent on some garnets (this is mentioned in the 1869 article below, note that "titanoferrite" is an old term for ilmenite) - 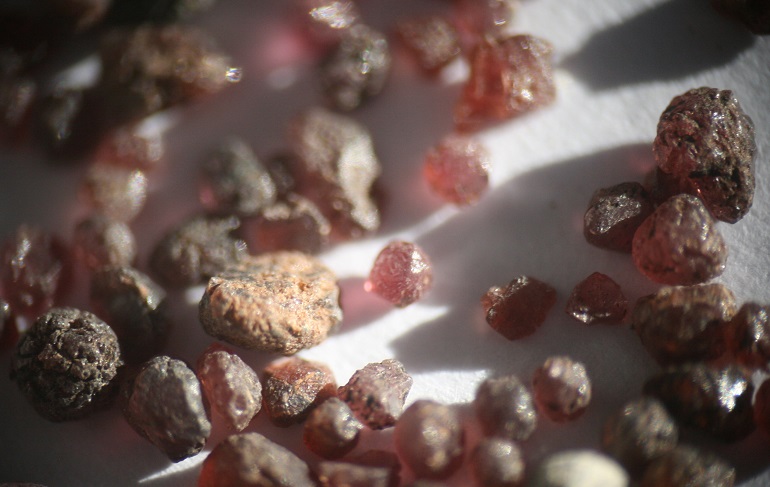 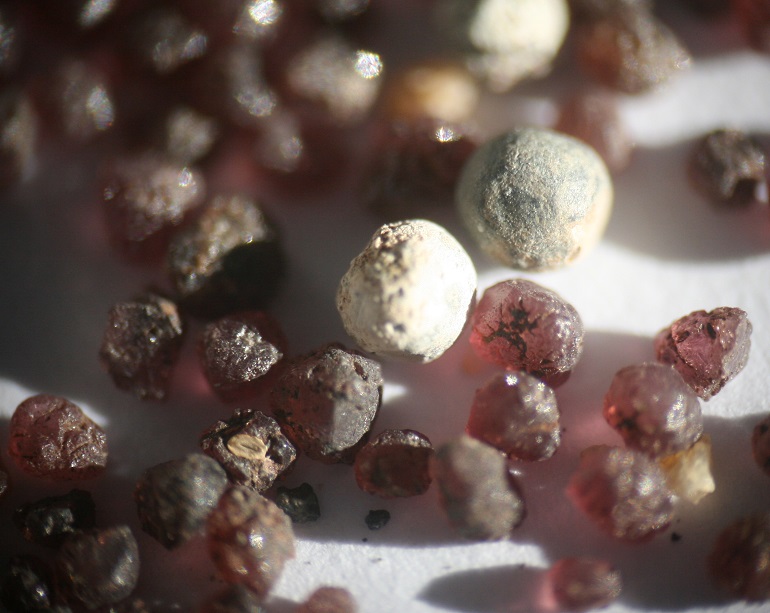 The shotgun pellets found in the Suisgill burn. I measured the average of 9 well formed shot = 0.068 gram ea. = 1.05 grains. No. 8 shot is 1.09 grains, and is the primary load used in 12 bore cartridges intended for grouse. Prince Charles regularly shoots on the Strath of Kildonan grouse moors.... Does the possibility of .974 grams of Royal lead-shot add value to the gold-free alluvium? Who knows? Royalist collectors of such relics will probably leave this web-page after reading some history.... 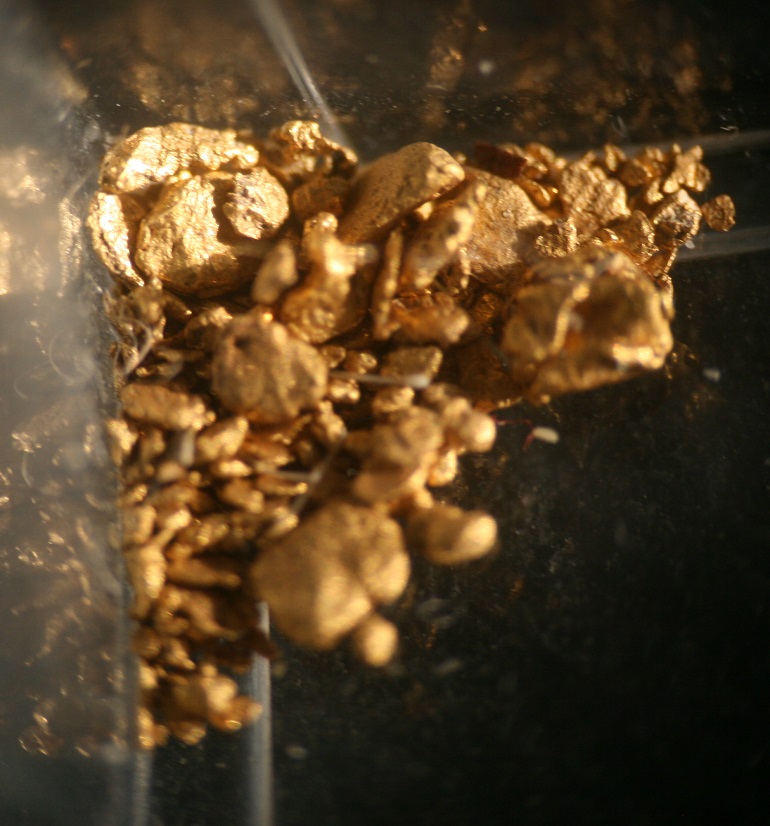 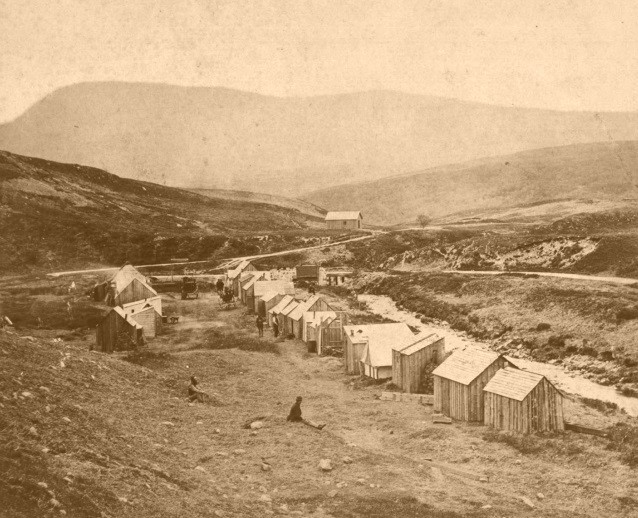 Baile an Or, April 1869.
Early in January 1870 the huts were burned and the ground was cleared

The existence of gold in the burns of the area was probably apparent in Pictish times, but the first recorded discovery was in 1818, with a ten pennyweights (15.6 grams) nugget being found in the River Helmsdale. This was used to make a ring for George Leveson-Gower, 1st Duke of Sutherland. 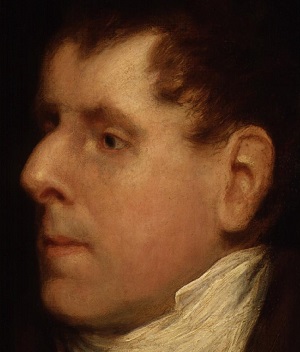 The compassionate face of the landed gentry
George, 1st Duke of Sutherland

He was busy at the time with the Sutherland Clearances, brutally evicting a staggering 2000 families per day.  Houses were set alight, possessions were destroyed. The inhabitants left destitute with nowhere to go and no means to feed themselves.

50 years later, those "peasants" remaining in the area got a glimmer of hope, with the publication of the prospecting results of a certain Robert Gilchrist, a Helmsdale native who had just returned after 17 years prospecting in Australia. He found significant deposits of gold within the Strath of Kildonan in November 1868, especially in the Suisgill and Kildonan Burns. The news was even reported as far away as Sydney, see press clipping at foot of this document.

A miniature gold-rush ensued. It lasted only 14 months. 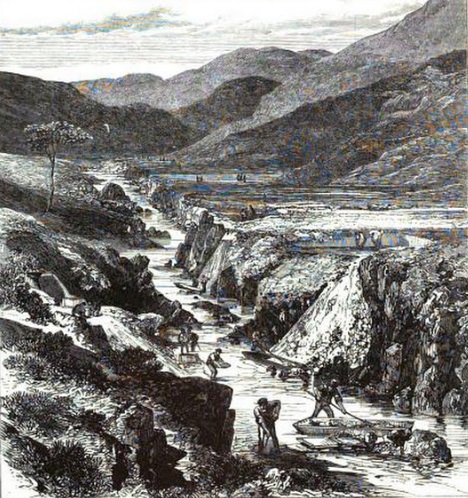 It was sometimes possible for a person to get a couple of ounces of gold in a good week. On occasion large nuggets turned up, such as the 2 oz 19 grains (58 gram) Rutherford Nugget found in the Suisgill, and sold for £9. It was honest hard work that could feed a family, with the possibility of a rich find. 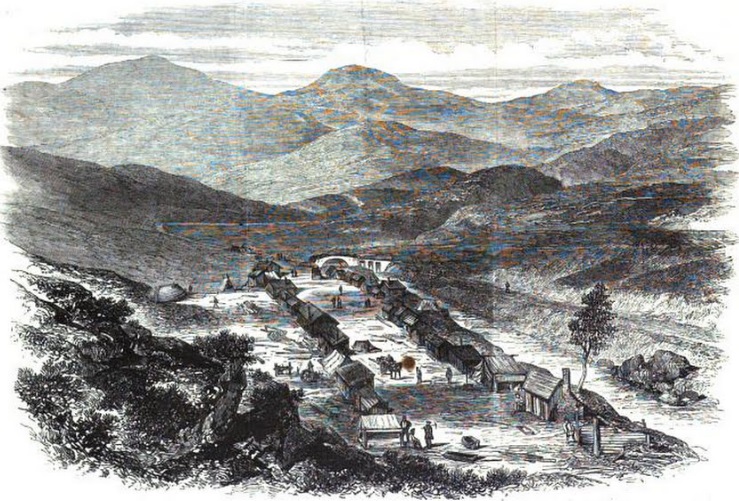 Baile an Or
"The Sutherlandshire gold diggings," Illustrated London News, May 1869

The 3rd Duke of Sutherland, George Sutherland-Leveson-Gower, stopped the operation at midnight on 30th December 1869. Although getting 10 per cent royalty on all finds, and charging each man £1 per month for a licence, the duke considered it "bad form" for the peasants to continue digging his estates up. 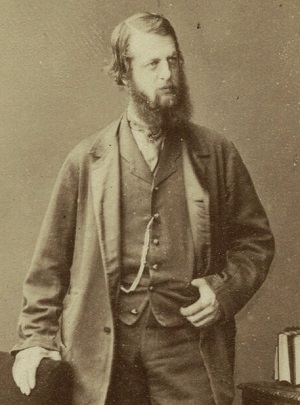 The ever compassionate face of the landed gentry
George, 3rd Duke of Sutherland

Both the Kildonan & Suisgill burns feed the River Helmsdale, a prime salmon river. The hills were full of game; deer, ptarmigan, grouse and blackgame abounded. Grouse shooting on the surrounding moors and fly-fishing the rivers have Royal Patronage nowadays, as the duke decided to take away the livelihood of the gold diggers, in order to cater to the pastimes of the landed gentry, from then to this day. Duke George torched the Baile an Or in January 1870.

Prince Charles is particularly enamoured with the Strath of Kildonan. Since he was a young man he's shot grouse on the moors and fished salmon from the River Helmsdale. He even did a watercolour of the river - 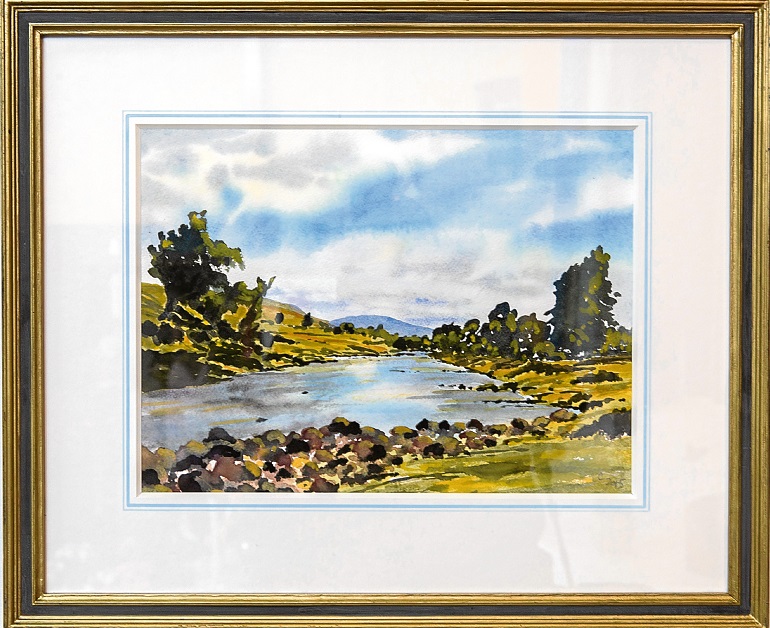 Prince Charles dragged his new bride Diana (who hated bloodsports) there in 1981 during their three-month honeymoon tour....

"Sorry but no.., my er.., darling princess..., you do look absolutely divine in that skimpy diaphanous silk lingerie..., but I have to be up at 5 tomorrow, the salmon are running, we're on the river in the morning and then bagging few brace of blackgame with my new Purdey after lunch! You could perhaps join the gamekeeper and I for high tea? Wear proper tweed clothing though my dearest, the keeper has a heart condition!" 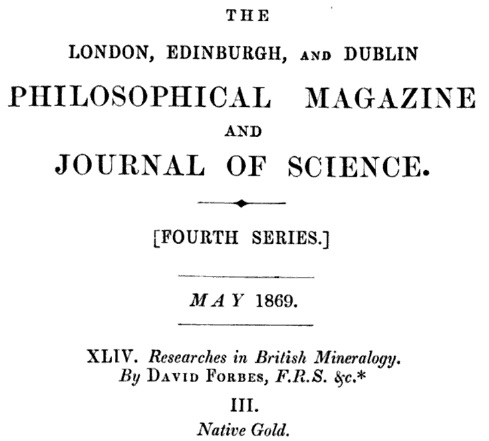 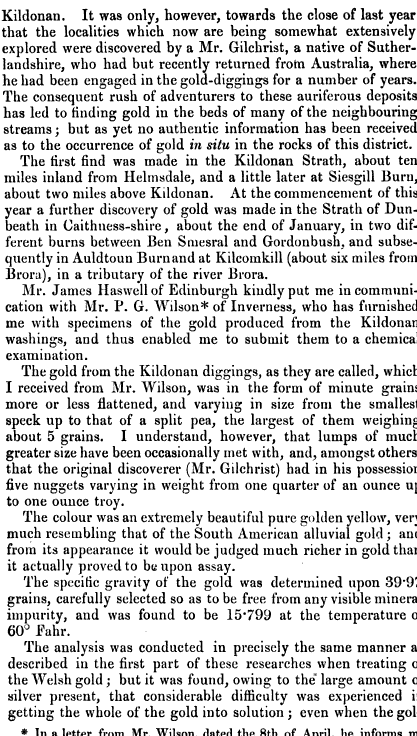 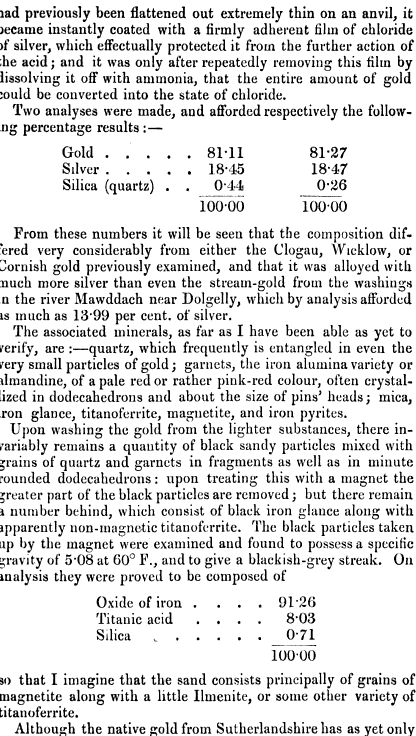 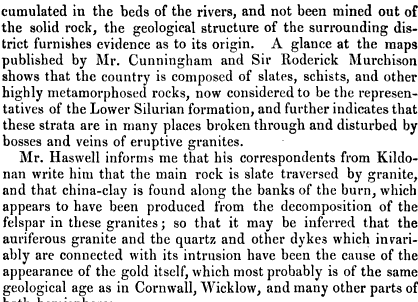 This following clipping is from The Sydney Morning Herald, Apr 30, 1869. The author's position in the social strata of Great Britain can be gathered from these excerpts -

".. extravagant ideas are entertained by the peasantry of the chances of making a fortune.."

"It would be difficult to use language too laudatory of the Duke of Sutherland when speaking of his kindness towards his tenantry." 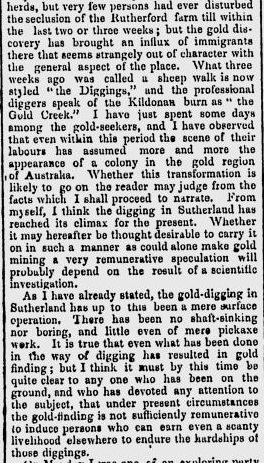 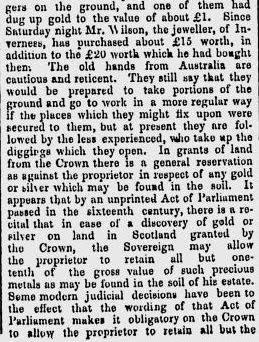 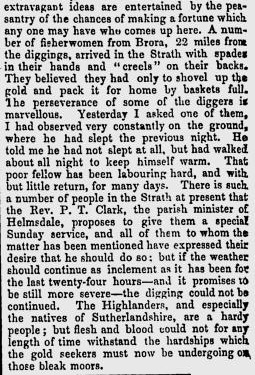 At least the effects of the Clearances are mentioned in the following (just legible) article. "The Sutherlandshire gold diggings," Illustrated London News, May 1869 - 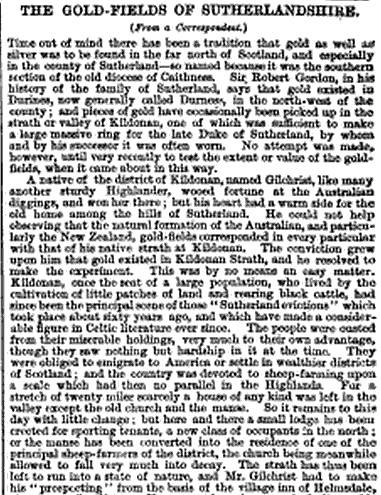 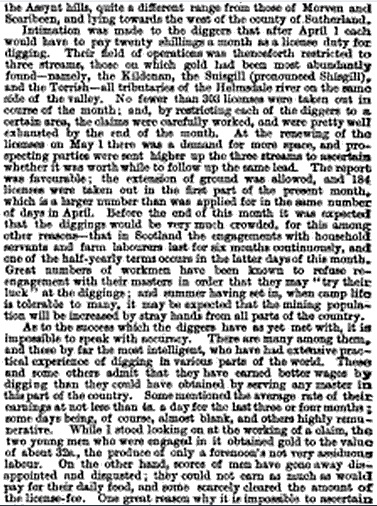 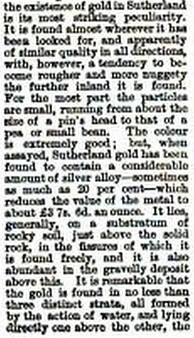 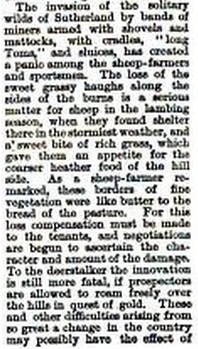 As an end-note, during my panning expedition to Scotland in 1978, I visited the modest home of the Dukes of Sutherland, Dunrobin Castle - 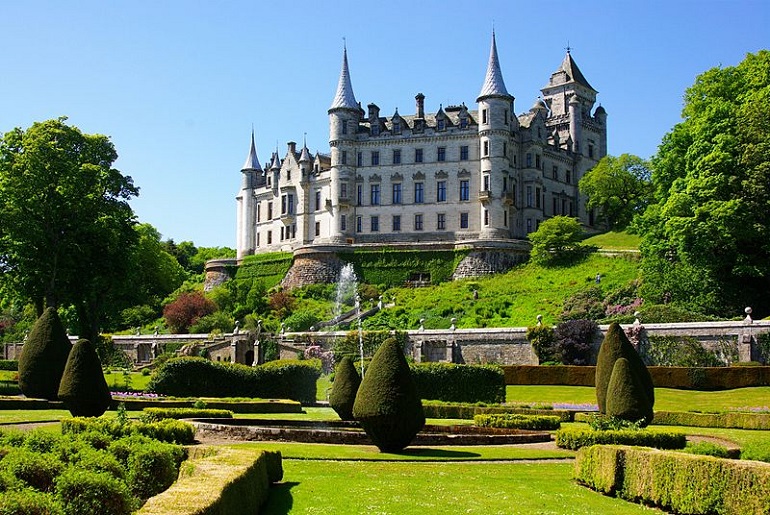 Dunrobin Castle is a stately hovel, the family seat of the Clan Sutherland.
Photo by Jack Spellingbacon, 2008

There was no bar, but I saw the "Helmsdale Nugget" on display, together with about an ounce of smaller nuggets. These had been given to the 3rd Duke of Sutherland. The Helmsdale Nugget appears to be a renamed specimen, it was formerly the Rutherford Nugget, bought by a rich sycophant to give to the duke. The young lad who discovered it in April '69 at least got his £9. 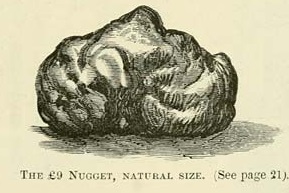 From a rambling booklet from 1869 here

The Gold Fields of Scotland, by W Lauder Lindsay
(note misspelling of Suisgill)
Journal of the Royal Geological Society of Ireland.VOL.XII.VOL.II.1867-70 here 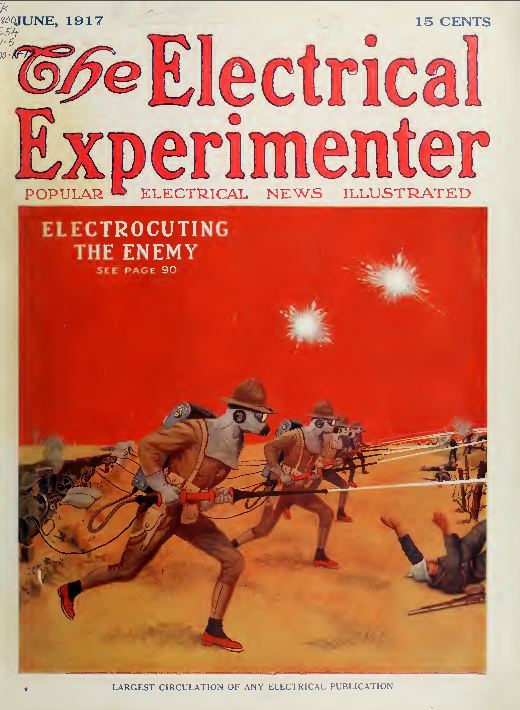 WARNING - Many subjects outlined within this site are extremely dangerous and are provided here for information only. Please don`t experiment with high voltages or chemicals unless you are fully conversant with safe laboratory practices. No liability will be accepted for death, injury or damage arising from experimentation using any information or materials supplied.
Posted by Unknown at 20:48