Hodges, bent double under the load three hundred-weight of granulated zinc was impressing upon his back, shuffled past his master to the hydrogen generator. As he emptied the sack into the muriatic acid, he could overhear Glitch expounding his latest theories to the assembled dignitaries.

"You see, gentlemen, the hydrogen gas is essential to both the lifting bladders and to the gun chamber. Without the bladders, the Coal Bomb cannot attain altitude; without the gun I cannot demonstrate our Empire's safety should some undesirable nation attain Coal Bomb engineering skills." Glitch pointed to the huge, straining assemblage of hydrogen-filled Blue Whale bladders, and the darkly menacing length of the Glitch High-Swiftness Gun.

Hodges shuffled back through the crowd of London Toffs. They parted, to ensure they suffered no contact with him, his obvious groin bulge, gleaming hook, otter-skin eye-patch, and general demeanor providing ample reasons for avoidance. Glitch had ordered that Hodges' appearance should be improved somewhat for this visit from the Government of Queen Victoria.

Maud the maid had tried her best, even to the extent of preventing Hodges from refilling his ear canals with hog-fat. However, even her ministrations had failed to alter the essence of Hodges. He was still upset over the Mr. Groves incident, and his over-all mental and physical attributes were hardly to be changed by the addition of a fur eye-patch. Hodges was simply different, and people reacted to him in the same way they would with white coal or black milk.

Glitch shouted after Hodges, "Light the Coal Bomb Hodges! We're retiring to the Big Game room for tea, I expect that the Bomb, Bladders and Gun to be ready for demonstration immediately after refreshments!" In the Big Game room, even those accustomed to hunting were appalled by the shear quantity of stuffed, rare or extinct animals. Glitch caught Lord Palmerston looking at the giant Irish elk head mounted above the huge open fire. "Hah, Palmerston! You don't see antlers like that any more - my GreatGrand-Pater bagged that beauty, then poisoned the remaining breeding stock with prussic acid. Brilliant foresight! The specimen is unique!"

After tea the war-office crowd was led back to the courtyard. The Glitch High-Swiftness Gun was being prepared by Hodges in the South Pasture, next to the twisted remains of it's predecessor. Glitch professed to have perfected the "aim, light fuse & run" method of operation - Hodges having only narrowly survived the prototype's sole demonstration. The Glitch Gun was as dangerous to friend as to foe, anyone within forty feet of it's picric acid chamber upon firing risked death, deafness, or both.

In the relative safety of the courtyard Glitch explained the straining Coal Bomb above them. "As you can clearly discern gentlemen, the Coal Bomb is well alight now. The heat from it`s furnace is utilised in a multiplicity of ways. First, as you can see, the bladders are now taut with warm hydrogen, and veritably straining to lift the bomb. Second, the heat has thoroughly dried the glass and cat-skin, for efficient electrostatic generation. Third, and by no means least gentlemen, the furnace has heated the sealed bomb chamber. And that chamber was partially filled with the best Durham coal. The coal charge will, by now, have undergone destructive dry distillation." Glitch looked at a line of blank faces, "The sealed bomb chamber, gentlemen, now contains a hot, pressurised, highly explosive mixture of coal gas and air." Glitch realised that his technical description of the bomb had lost this shower of beaurocrats. Time for the demonstration, he reasoned. He unsheathed "Old Notched", the Glitch family heirloom, kept polished and ultra-sharp by the generations, for ceremonial or public order use. Originally forged from a nickel-iron meteorite which fell in 1124, the knife sported a mammoth-ivory handle, inlaid with scottish-gold wire.

"Just think, gentlemen, a bomb constructed from iron and coal!" Glitch severed the hemp rope with the ancient knife, and the Coal Bomb took off. While the assembled war office strained their necks following the smoking progress of the bomb, Glitch turned to signal to Hodges. He was nowhere to be seen. The Glitch High-Swiftness Gun was unmanned, it's huge barrel pointed skywards, the thick yellow cylinder of the chamber counterbalanced earthwards. Glitch flew into a rage. "Hodges you ingrate! Where in Lucifer's kingdom are you?!" He shouted.

Hodges appeared from behind the South Pasture extinct volcano. He shouted up to the mansion, "Yes Master?"

"What the hell have you been doing you dolt? The bomb's away! Look!" Glitch pointed to the assembly of whale bladders lifting the smoking bomb high over Weardale. Hodges ran towards the gun, whilst the appearance of Maud the maid from behind the volcano caused Glitch to suspect that Hodges continued to take liberties.

Hodges jumped up onto the aiming seat and turned the handles to bring the gun about. High above, the Coal Bomb trailed thick black smoke.

The War Office had requested a demonstration of the Coal Bomb after Faraday had returned to London from Glitch Manor. Highly respected by Her Majesties Government, Faraday had convinced Lord Palmerston that Glitch could alter the nature of warfare with his latest inventions. He had visited recently only to deter Glitch from lobotomising Hodges. He had arrived late, the coach & four having been delayed due to the weather, and feared an unusual intellect could have been lost. Hodges was, however, unharmed. The same could not be said for Mr. Groves, the Horse Doctor, his surgery upon Hodges being limited to the hand amputation, due to an eruption of violence. Upon learning of the immanent flencing of his brain, Hodges had thrown his restrainers aside, and beaten Mr. Groves witless with his freshly cauterised wrist stump.

Lord Palmerston and his officials were following the progress of the Coal Bomb across the blue winter sky, while Hodges lined up the thirty foot barrel of the Glitch High-Swiftness Gun. Hodges reckoned the "lead" required to allow for the drift of the bomb during the fuse burn-time. He lit the fuse, jumped from the aiming seat, and ran like there was 200lbs of trinitrophenol about to explode behind him.

With a massive detonation the Glitch Gun fired. A brief large fireball and white concussive adiabatic shock front erupted from where the yellow chamber had been. From the muzzle, a streak of actinic white light shot towards, and through, the Blue Whale bladders supporting the Coal Bomb. The bladders inflamed and the Coal Bomb dropped.

If time could have been slowed, then the operation of the Glitch Gun could have been apparent to the War Office. They would have been able to observe the fuse burn to the lead azide, contained in it's thumb sized varnished copper cylinder, embedded in the solid-cast picric acid axial point. The fuse detonated the unstable white lead azide which, in turn, detonated the yellow picric acid. A detonation front would then be observed travelling along the picric acid hollow chamber casting. At over 7000 meters per second, towards the breech. Inside the picric chamber, hydrogen gas would be violently compressed both towards the axis and towards the breech. Then, acting as an extreme air-gun, the explosively compressed hydrogen would accelerate the .44 caliber magnesium metal bullet up the thirty feet of evacuated barrel. Bursting through the copper foil muzzle seal, the magnesium bullet's hyper-velocity would cause it's nose to burn, through air resistance. The ultimate flat trajectory tracer.

As it was, being equipped with time frames of a human nature, the War Office delegation were simply shocked & stunned by the gun. And spell-bound as the Coal Bomb dropped towards earth, tattered remnants of the urinary collection apparatus of many giant marine mammals fluttering behind. The bomb's decent was a miracle of Glitch ingenuity. The fan at the top rotated the glass cylinder, which was in intimate contact with the cured skin of a cat. Charge drawn from this crude frictional electrostatic generator was stored in leyden jars during the decent. Also during decent, air rushed into the glowing coals of the furnace, creating an inferno, further heating and pressurising the bomb chamber gases. Also heated were the stout, sealed glass globes, one containing turpentine, the other fuming nitric acid. These constituted the back-up ignition system, ready to ignite a large conflagration should the electrical gas detonation system fail. The blast furnace action upon decent also produced a prodigious amount of smoke, sparks and flames from the bomb's chimney. This, Glitch had reasoned, would terrorise the enemy much more than a passive, conventional bomb.

Glitch had time to comment on this, "Wouldn't want that bastard falling anywhere near you eh? Palmerston?" The British Prime Minister watched as the bomb's smoking decent disappeared behind a hill a couple of miles away. Seconds later, a dull boom indicated that the Coal Bomb had exploded.

Lord Palmerston asked, "Where exactly did it fall, Glitch? You don`t suppose anyone could have been under it do you?"

"Not a chance Palmy old boy! We're all right here, after all! Hodges will find the bomb fragments scattered round near Heights Mine by the look of it."

"But what about the miners Glitch? Or workers of the land? Someone could have been killed, Glitch!"

"Such is the nature of weaponry Palmerston." 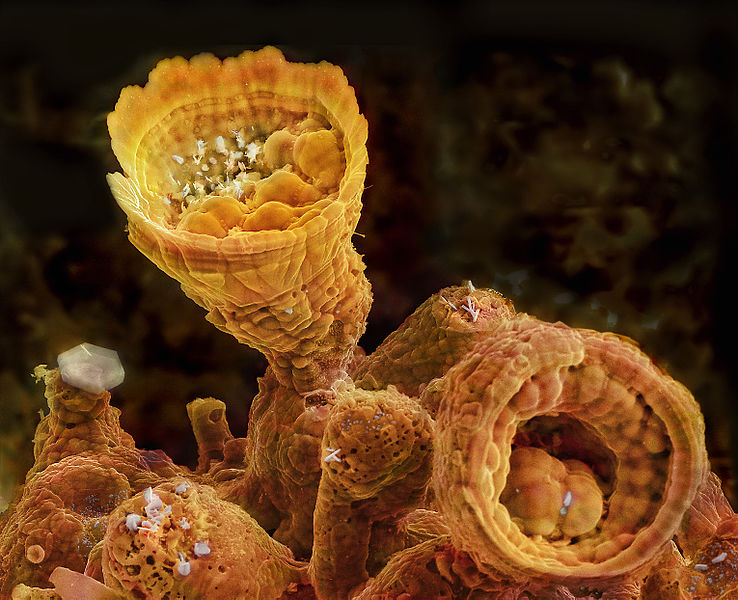 WARNING - Many subjects outlined within this site are extremely dangerous and are provided here for information only. Please don`t experiment with high voltages or chemicals unless you are fully conversant with safe laboratory practices. No liability will be accepted for death, injury or damage arising from experimentation using any information or materials supplied.
Posted by Unknown at 14:46