Rupert Glitch, at 12 years old, stood back to marvel at his gigantic experiment. His grandfather's two huge Cuthbertson Electrical Machines were being vigorously rotated by two teams of four men. The very air was alive with electrical fields and Rupert's exposed skin felt as if spiders webs were clinging to him.

Young Hodges, the bastard son of Hodges, his father's assistant, stood near the confluence of the machines. The youth's hair stood on end, and he was pleading with Rupert, "Please Master Rupert, I don't like it! My fingers are on fire!"

Young Hodges, purple brush discharges erupting from his extremities, moved the dead Golden Eagle closer to the discharge gap. Suddenly the dual machines unleashed their stored charge. A blinding flash, a deafening concussion, and a conflagration of burning feathers left all in the room shaken. The eight men stopped cranking the Cuthbertsons, and looked over, horrified, to where Young Hodges had stood. Rupert Glitch moved closer to the smoking pile of feathery rags and gave it a tentative kick, "Hodgey?"

The remains of the avian reanimation test subject gave a hopeful twitch in Young Hodges rigid, blackened arms. The acrid smell of burnt eagle feathers hung in the air. The boy remained still.

Rupert ran from his playroom and into his father's Big Game Room. Glitch Senior was lounging on his Polar Bear divan, smoking a luxurious blend of Virginia tobacco and desiccated toad warts. He looked up, from a book entitled Unusual Illustrations for the Savant, to his son, "Was that an electrical detonation I heard young Rupert? Got the old Van Marums up and running eh? I remember Mr. Cuthbertson knocking those together for your grand-pater, it must have been eighte.."

Glitch's mood suddenly darkened, his anger erupting from a troubled soul to show only as a slight creasing of his brows, "Rupert, you know we can't afford another death in the mansion, at least not in the same year... Show some sense young feller me lad!"

Glitch walked over to his wall mounted Stentorian Beckoner controls. He pulled the knob which released the clockwork twelve inch influence machine, then moved the acetylene gas supply lever over to full. Outside, a pressurised jet of gas inflamed as it passed over the influence machine's flurry of sparks. A huge yellow flame appeared from the north wall, issuing from the mouth of a semi-gilded brass gargoyle. Inside, Glitch unwound the goat-leather speaking tube. He hesitated. This was the first test of the Stentorian Beckoner in an actual emergency. The device's operation depended upon the human voice vibrating a diaphragm, made from the cured and highly stretched bladder of a pine marten. This drum-tight diaphragm, via a delicate lever arrangement, altered the position of a tapered ivory plug. The plug altered the flow of gas, and so the huge external flame oscillated in parallel to the tiny vocal vibrations. The infernal amplification of sound.

Theory was one thing.... After ten minutes or so, shouting down the leather tube, and fiddling with the valve tuning knob, Glitch's voice was finally projected with great volume, "Hodges! Come Here! Your Son Is Dead!"

With huge satisfaction he wound up the tube, and shut down the gas supply. Turning to his own son, he said, "Well Rupert, I think we can say my Stentorian Beckoner is a success! I don't care how much congealed hog-fat Hodges has in his ears, he must have heard that! What!"

Glitch reclined back into the luxurious white fur of the divan, already dreaming of the installation of a Stentorian Beckoner for announcements in each railway station of The Empire.

Later that day, after Rupert had visited Young Hodges recuperating from his burns in the old pitchblende boiling shed, he returned to his playroom. His avian reanimation experiments having proved fruitless, Rupert considered his next endeavour. He had been dabbling with Thomas Wedgewood imaging, and had several glass plates ready sensitised with silver bromide. This new art of capturing a moment in time upon a plate of glass had seemed rather tame to Rupert, until his father suggested the capture of electrical imagery.

The Golden Eagle reanimation was to have been captured upon glass, forever a testament to Rupert's emerging scientific prowess. But since Young Hodges had spoiled the experiment - by burning the eagle with his ineptitude, Rupert decided a simple demonstration of his power to recreate the Northern Lights - the Merry Dancers - the Aurora Borealis, would have to suffice.

The Auroral Chamber - A yard of thick Sunderland glass tubing, some four inches internal diameter, sealed at extremities with discs of glass. At the centre of each hermetically sealed disc a platinum wire was fused. Forty inches of half-inch diameter glass tubing leading from the glass chamber. The whole, having been filled with quicksilver, inverted over an iron bucket of quicksilver, forming a torricellian vacuum of high degree within the chamber.

Rupert set up the Auroral Chamber between the two great machines, with the spillage of only around seven pounds of mercury. The floor of his playroom looked like the Milky Way, stellar drops against black Frosterley Marble.

Rupert signalled to Mr. Matthews, to instruct his men to begin turning the huge frictional electrostatic generators once again. Procurer, Overseer & Driver of Indentured Labour, son of a famous Newcastle body snatcher, Matthews set about the crankers with his dog-whip, and soon the atmosphere was once again electric.

The playroom was darkened with shutters and drapes, the machines soon dimly lit the surroundings with a dull violet glow from their operation. The stench of ozone replaced that of burnt eagle. The glass around the platinum wire at the positive end (that is, the end attached to the Van Marum whose output was from the rubbers), glowed a bright green in contrast to the violet corona.

This preliminary high vacuum effect was not of primary interest to Rupert. Only when he was to introduce tiny bubbles of various gases into the submerged mouth of the torricelian tube, to disperse into the Auroral Chamber's void, would the spectacular glowing clouds, bars, streamers and beams appear in their multi-chromatic splendour.

At least that was what had happened when Rupert had tried the chamber with his small cylinder type frictional electrical machine. This was the first time the chamber had been driven by the power of eight men.

Rupert saw that small, highly incandescent spots appeared on the anode wire. These actinic blue-white spots moved on the platinum wire, suddenly flaring up, then subsiding. The glass glowed a vivid green when this occurred. Rupert shielded his eyes with his black velvet wrapped silver bromide glass plates. At this point, and before any auroral gaseous agents could be introduced into the electric vacuum, the chamber violently imploded. Shards of glass cut Rupert about the legs, whilst one of the Cuthbertson crankers received an auroral injury of a severe nature to his face. Fortunately, the Wedgewood plates were unbroken.

While his son recuperated from his injuries, Glitch had Hodges develop the light-picture plates, as within the pile of unexposed plates there apparently was a fine image of Rupert gassing the Golden Eagle with phosgene, before the attempted reanimation. Indeed, Glitch was well impressed by it, and also an unexpected other, a reproduction of which is presented here.

Concerning this image, Glitch was heard to say to the Bishop of Durham, "I can foresee many great applications for this imagery of the hidden, Bishop. It could revolutionise the bespoke glove-making industry!" 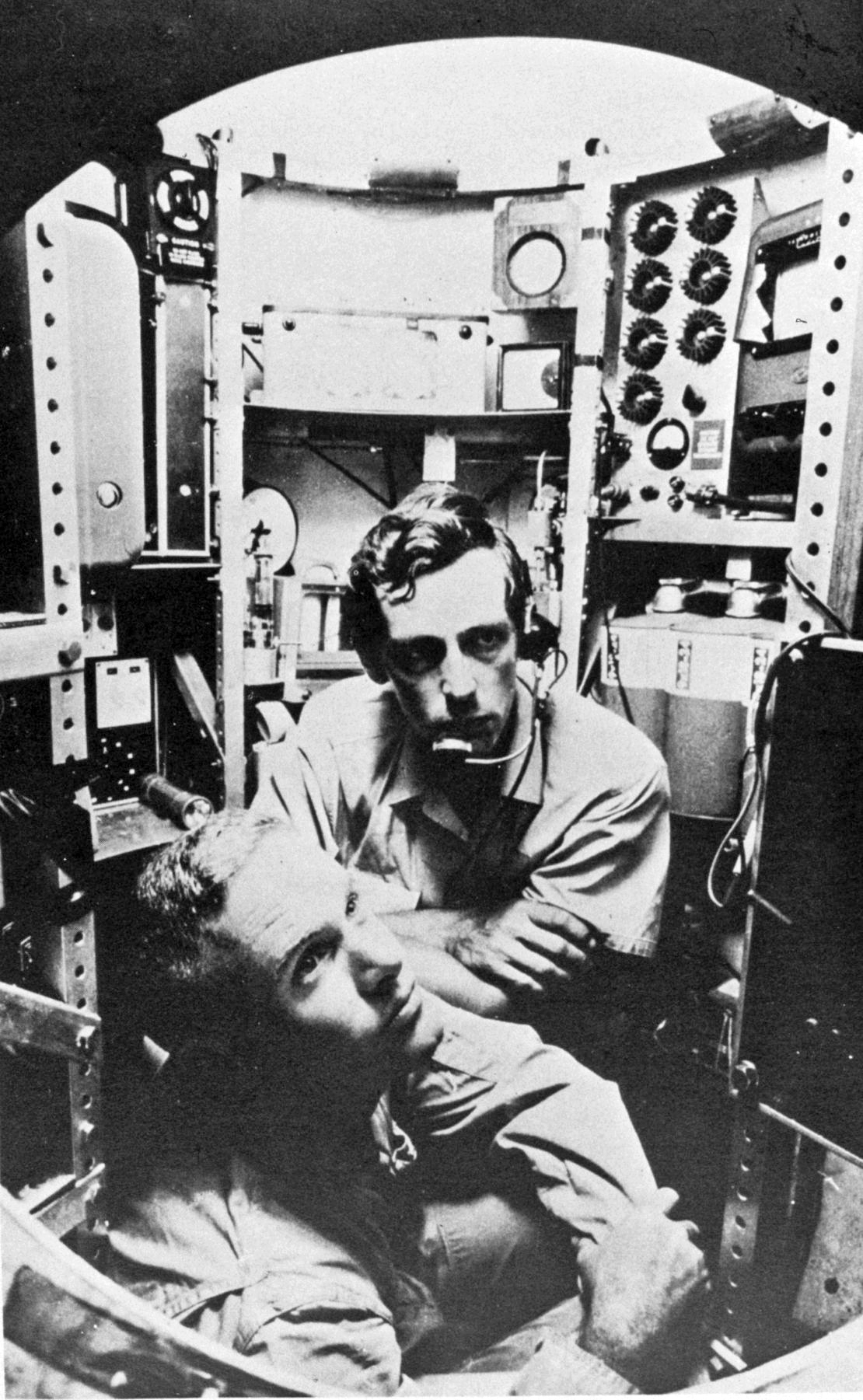 Don Walsh and Jacques Piccard
in the bathyscaphe TRIESTE, 1960


WARNING - Many subjects outlined within this site are extremely dangerous and are provided here for information only. Please don`t experiment with high voltages or chemicals unless you are fully conversant with safe laboratory practices. No liability will be accepted for death, injury or damage arising from experimentation using any information or materials supplied.
Posted by Unknown at 20:41