A Merlin is Made - Manufacture of the Spitfire Engine 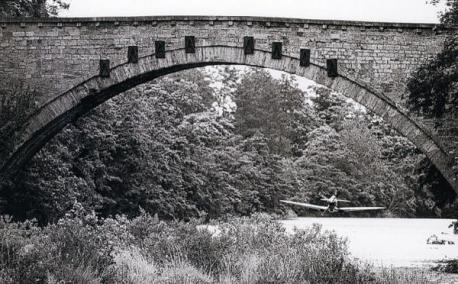 The Supermarine Spitfire, an iconic Battle of Britain warplane, survives today as a handful of highly desirable aeroplanes owned and flown by rich enthusiasts. Among them is an example I've seen flown locally a few times, but unfortunately I didn't get to see it fly under the bridge at Winston in 1988 -

The wonderful sound of the supercharged 27 liter V12 Rolls-Royce engine is an enduring testament to the precision engineering of its manufacture - there follows a 28 minute video, and below that, some photos from the factory.

A Merlin Is Made- the Production of Merlin Engines at a Rolls Royce Factory, 1942

Non-ferrous metal ingots, the raw materials for the Merlin engines which will be produced here, come into the factory on a roller track or conveyor belt and are transferred into separate 'stalls' by these female workers. According to the original caption, "the metal will not go into the foundry until a test of each consignment has been made by the Foundry Laboratory". 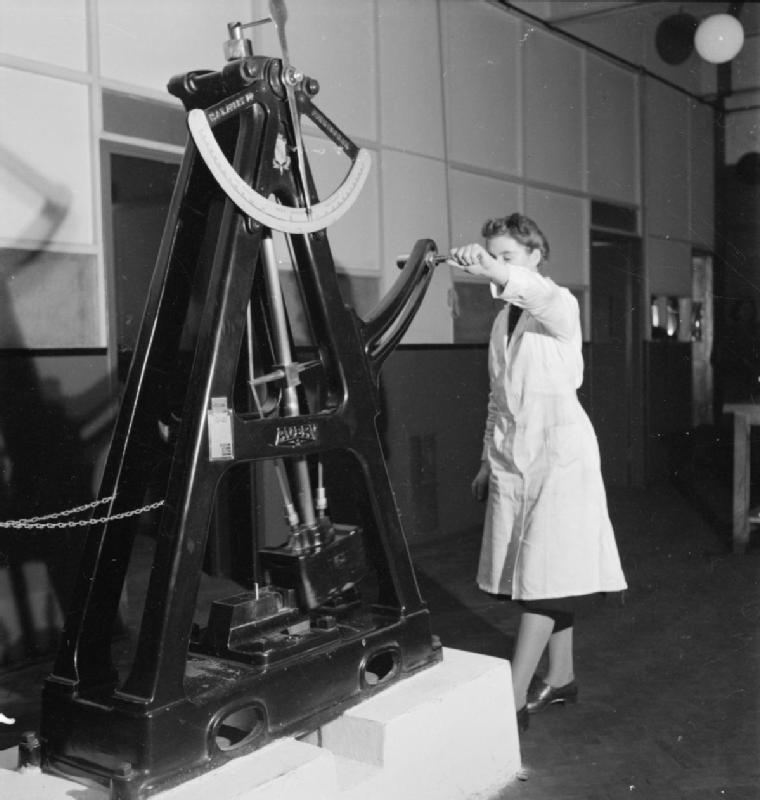 A female worker carries out Izod impact testing in the material and mechanical test department of this factory, looking at the point at which bar material fractures. This test involves striking the material with a weighted pendulum, clearly visible in the photograph. According to the original caption, tensile, hardness and impact tests are all worked in conjunction with heat treatment and fracture testing, in order to ensure that all material is correct to specification and satisfactory for use. 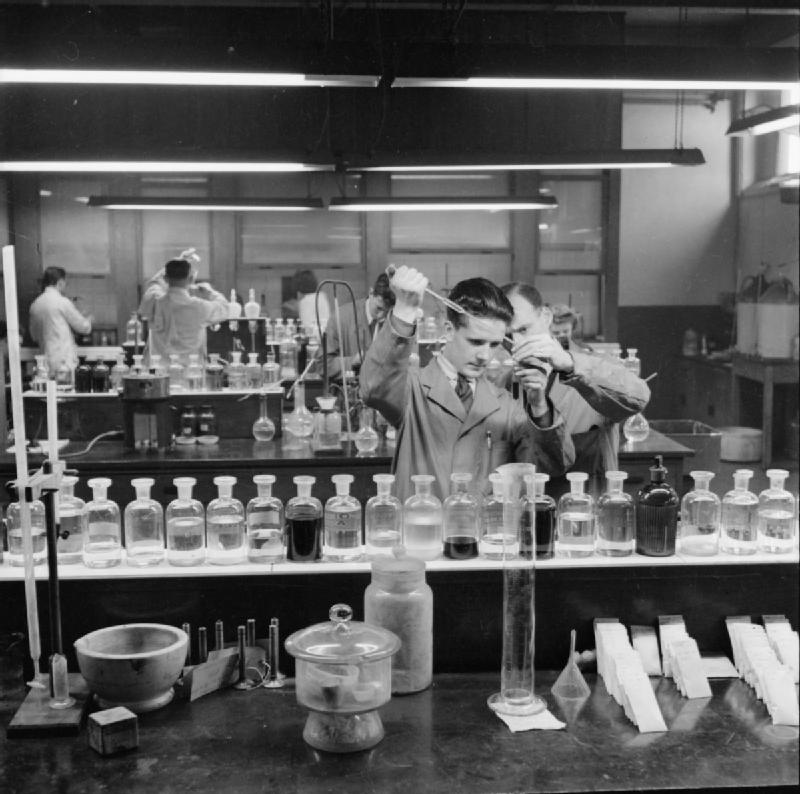 Chemical analysis is used to confirm materials testing and investigations are also carried out into electro-plating, pickling, etching and the development of oils and coolants. In addition, the development of rubber substitutes is being examined, in conjunction with rubber companies.

Two workers at this aircraft engine factory work together to test the temperature of molten metal before it is put into a mould. The metal has to be 720 degrees C before it can be moulded. Mr A Hamid inserts the thermocouple of the pyrometer into the molten metal and waits for the thumbs-up signal from his colleague, as she lets him know that the correct temperature has been reached. According to the original caption, Mr Hamid, who is from India, was discharged from the army on medical grounds, as he is totally blind.

Engine components are heat treated at this aircraft engine factory, somewhere in Britain. This process is known as 'oil-blacking' and the engine components are taken from the furnace at 500 degrees C and then plunged into oil. The oil burns into the surface of the metal and helps to prevent corrosion.

In the foundry of this aircraft engine factory, 2 cwt of molten aluminium is emptied into a cylinder head mould by workers in an operation known as the 'two-handed pour'

A wide view of the factory floor showing multi-spindle automatic machines manufacturing nuts, adaptors and unions from bar material. Each machine is overseen by a factory worker. 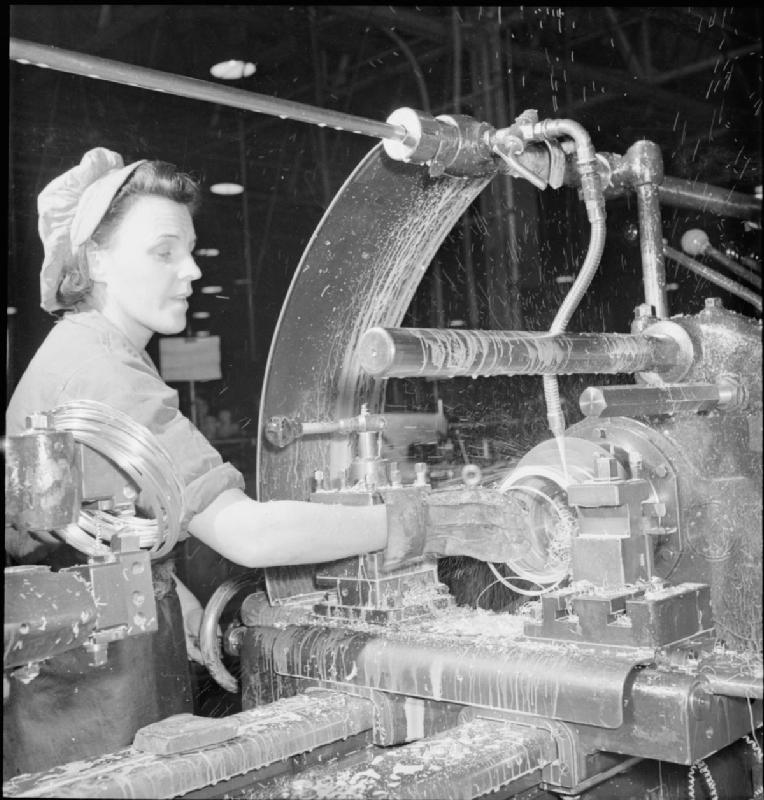 Mary Gordon operates a No 7 Ward combination lathe, producing sealing rings for the cylinder at this aircraft engine factory, somewhere in Britain. This is precision work, as an error of 0.001" would lead to the seizing up of the entire engine. Mary was a textile finisher before the war and her brother, a Commando, has been taken prisoner by the Italians.

A view of the notice board at this aircraft engine factory, somewhere in Britain. Notices for dances and other social events and activities can be seen, as can an important notice warning workers about oil dermatitis which can cause blisters on the skin.

Jane Wales checks the lengths and parallels of a Camshaft Bush on a Comparator, which registers an error of 0.0001 of an inch. The inspection section of this aircraft factory is attached to the machine shop and checks all diameters, lengths and other dimensions and uses various tools to do this. They also make hardness tests of pistons, gudgeon pins, pumps and boost controls.

A worker at this aircraft engine factory adds more information to the progress chart. Each section of the factory has its own chart and a check is kept on the number of parts produced. Too many of one part and too few of another would upset the balance of production and delay the finished job. 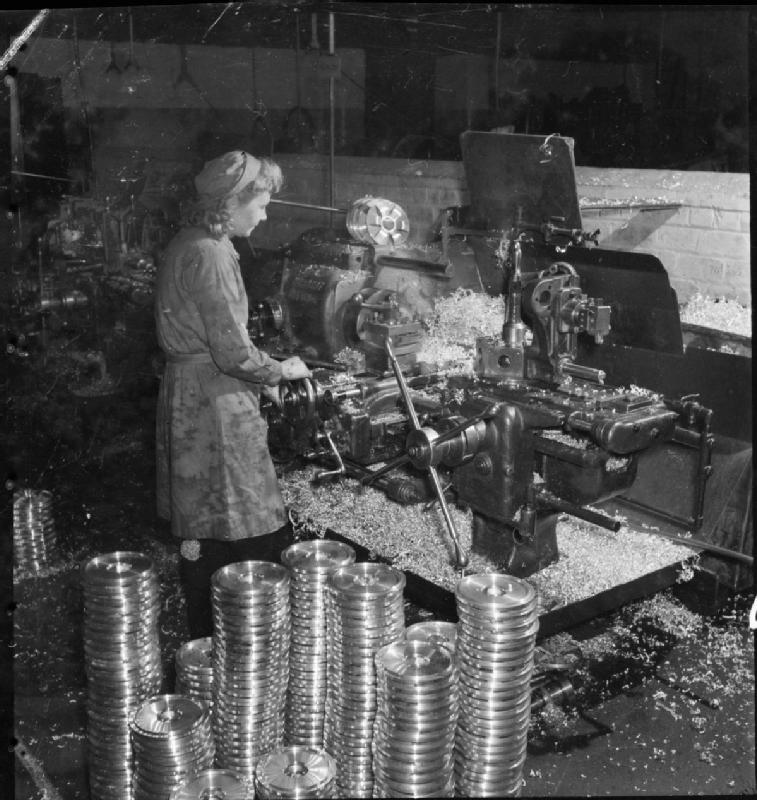 Factory worker Lena Ralston machines Clutch Carrier Plates for operating the Boost mechanism at this aircraft engine factory, somewhere in Britain. She is profile-turning the face which carries the clutch plate. A pile of metal shavings can be seen around here. 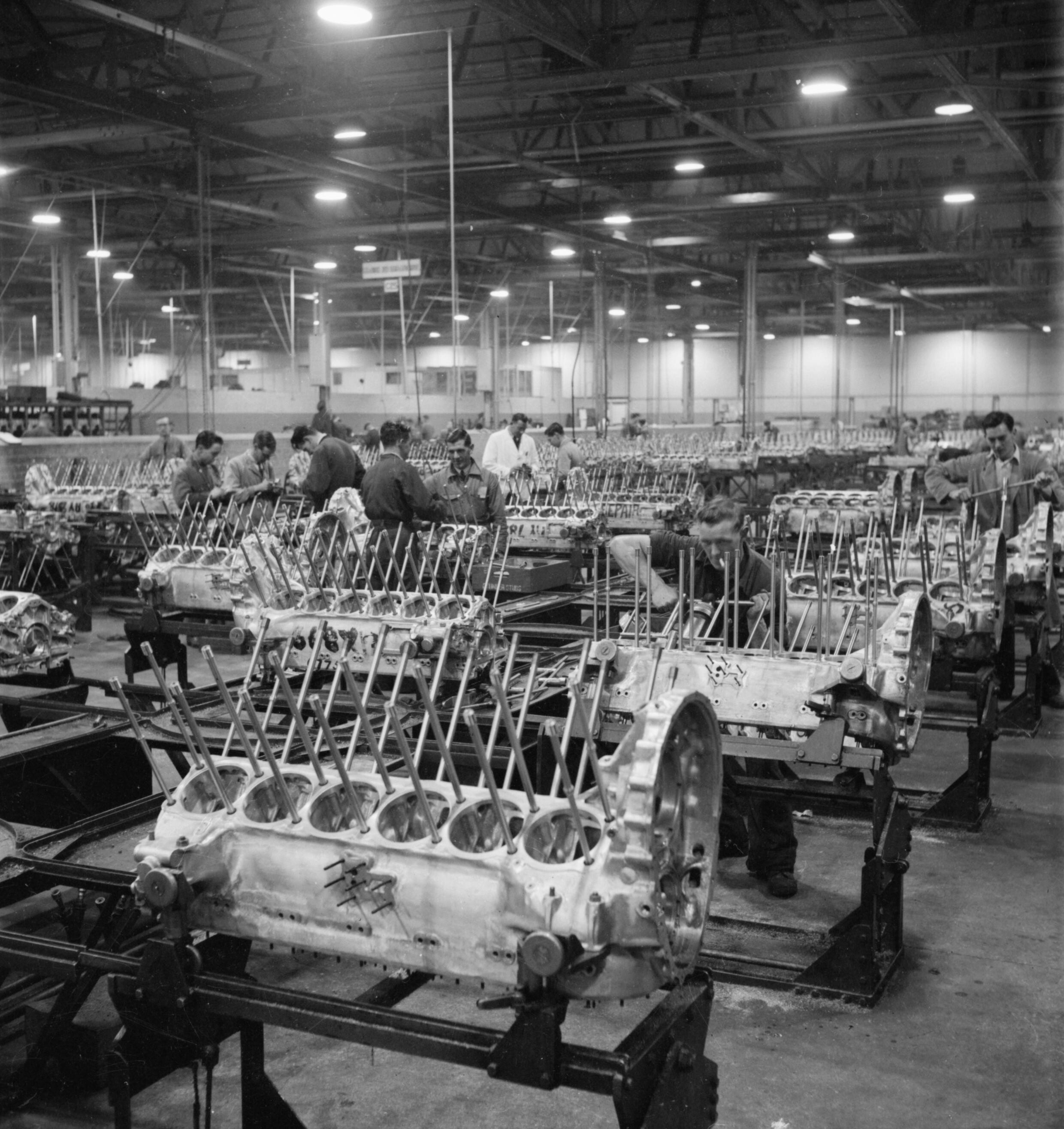 A wide view of the Crank Case assembly bay at this aircraft engine factory, somewhere in Britain. In the foreground, the cylinder studs are being fitted. These will hold the cylinder in place.

A worker checks the alignment of the pinions in the reduction gear at this aircraft engine factory, somewhere in Britain. This gear will then be fitted to the Crank Case.

Female workers attach the Induction Manifolds to the Cylinder Blocks, prior to the Blocks being fitted to the engine, at this aircraft engine factory somewhere in Britain. 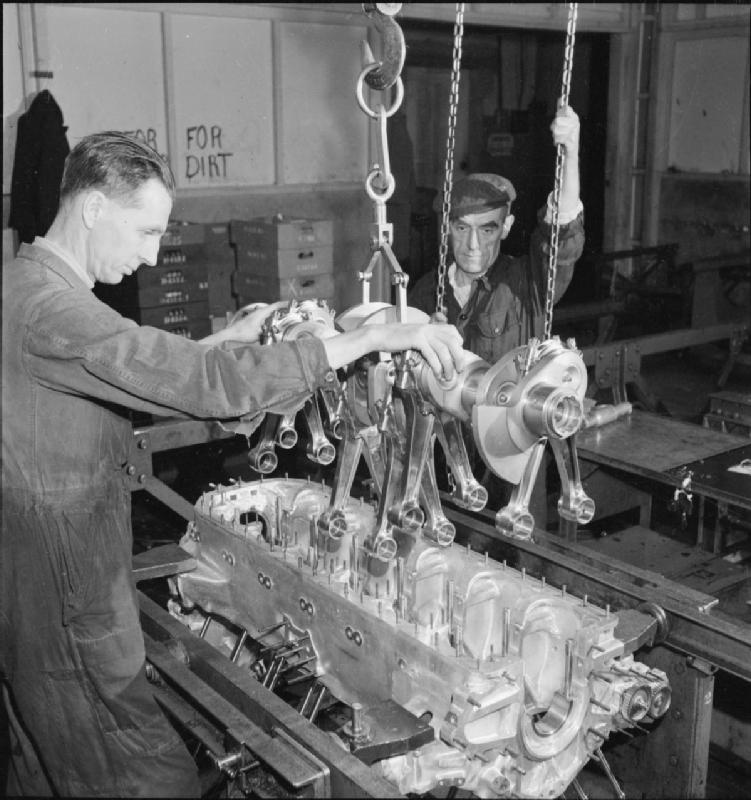 Two workers at this aircraft engine factory gently lower the Crankshaft Assembly into the Crank Case.

A factory worker makes the final adjustments to the Supercharger, which is now ready to be fitted to the engine at this factory, somewhere in Britain.

An engineer stands at his Control Panel in the Test Bed of this aircraft engine factory, somewhere in Britain. Through the window can be seen an engine which is being tested. Many complex tests are carried out, including coolant temperatures and suction, oil temperatures and pressure, petrol pressure and consumption and boost pressure from the supercharger to the engine. 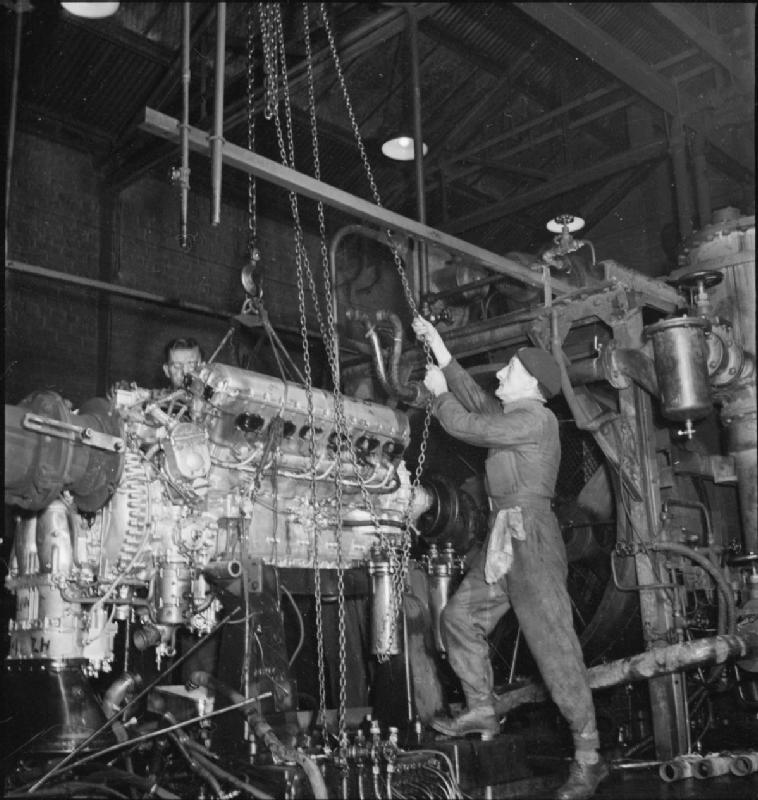 An engine is lifted off the Test Bed at this aircraft engine factory, after being tested. It will now be stripped, reassembled and given a second test before it is ready for dispatch. 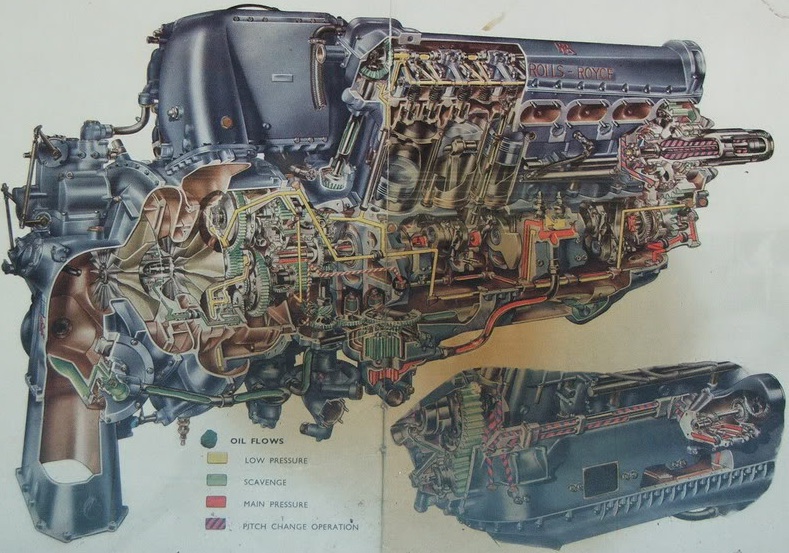